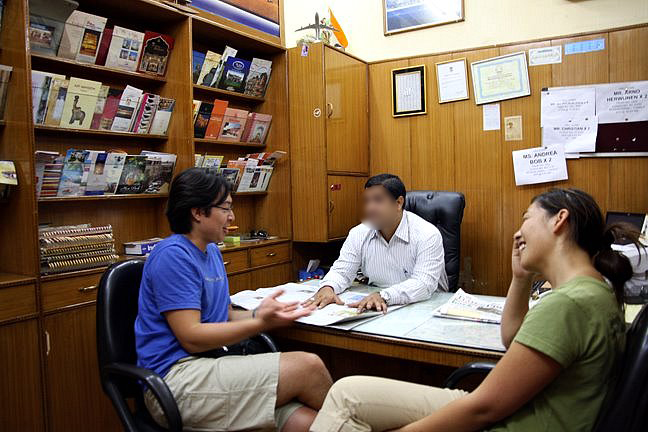 How do you get out of Indian tour agencies scams?

Namaste, you’ve been ripped off! Welcome to Delhi tourist scams.

“If you gave saddhu (Indian holy man) just 1/10 of what you’re paying on your ‘tour’, the saddhu and his entire family would pray for you for the rest of his life! – Papu Singh

Indians have a humorous way of putting things.

Under the desert moon and with the Jaisalmer city walls as our backdrop, we got to know the Mali brothers (of Shahi Palace) better. The drinks were free and the laughter was flowing. But when the brothers had heard the predicament I was in with the tour, things turned towards a down note.

Were we really naive westerners?

My question to them: Should we trust our driver?

They didn’t want to tell me the answer. Basically, the answer was yes and no.  As friendly as Kul was, he’d still be working for an unsavory company and it was his job to take us to all their commission shops.  The Mali brothers encouraged me to take action when I got back to Delhi and get off the tour if I didn’t like it.

I knew we had stepped into a scam. This was my first time to India and it was becoming a mess. It wasn’t the way I wanted to experience India.  I compromised my trip out of friendship. But each day, I was finding the compromise more annoying and frustrating.

Regina and I relayed the news to Margaret and Dan. They agreed to fight to get our money back and to get off the tour.  We all made phone calls to our credit card companies to see what could be done. Perhaps we had a chance… Maybe I could change this trip into the one I’d always dreamed of.  If I just trusted myself.

Table of Contents: Dealing with Delhi tourist scams in India and How to Get Out of ’em

To make a long story short,…

How to become a solo traveler in India

Twenty minutes before we meeting with the tour agency folk in Delhi and three hours before our flight to Nepal, we were sitting in Connaught Place, waiting for the day to begin. The air was a thin crisp gray, a flock of birds were rummaging the sidewalks, a few taxis were out on the road. Moments were ticking away and we (my companions and I) needed to figure out how to face the tourist agency that had scammed us.

One of them went pink with panic claiming we all signed a contract!


Well, not completely true. I didn’t sign any contract for our tour. Dan signed the contract, while the rest of us looked on. As the token male, he was the most eager to jump aboard a tour and assume the lead.

But the story changed. My friends intimated that I should pull together with them to make a united stand.

… For an upgraded tour!

Are you fucking joking?  More of this controlled touristy shit? No way.

This was my first trip to India, a country I was excited to see and experience it. I wanted to ride on Indian trains,  discover my own local finds vs visit tourist commission shops selling me jewelry and tapestry for a life I didn’t possess. It was never my intention to see India from an ass-pinched seat in a tiny Tata car, with my nose pressed against the window. Or blow through India by hitting bullet points on a checklist. I wanted freedom to explore India, I wanted to go more local and I wasn’t liking that our driver was starting to get temperamental and moody when we went against his ‘suggestions’.

No upgraded tour for me.

I wanted off and now.

So then my friends laid it flat out to me : They were fine with staying on the tour. If I wanted to get a refund for myself, then we’d part ways and I’d have to negotiate that on my own. 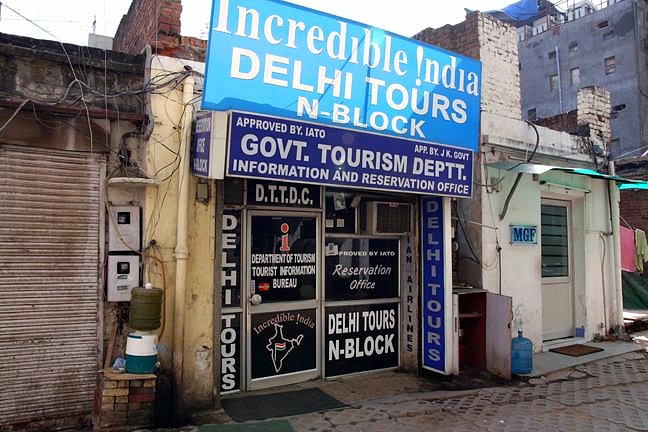 What does a Delhi scam tour agency look like?

Tip: If you’re looking for the official India tourism office (it would probably look a little more well-kept). Asking a rickshaw driver to take you to the official tourism office will be shifty. You should have a written address and enforce that you want to go there.

Ten minutes into my friends’ meeting with the tour agent, …

The tour agent tossed in a couple more  stops on the itinerary to dim the flames. My friends caved in without a fight. Upgraded tour? Not quite. A couple of extra sights, maybe a nicer hotel at one of the locations. Nothing much had changed and the changes didn’t reconcile how much was already paid. With Dan’s name and credit card on the line, they’d take whatever they could get, rather than risk upsetting the scam system.

I was the agent’s more difficult case. He was really angry with me, because I wanted off and I refused to back down.

Tour Termination.  A refund for the rest of my unused trip.

Living in New York City, you learn to fight until you get your way. From Con Ed or Sprint bills overcharging me, I’d been on the phone unbudgingly with supervisors fighting for each penny. It’s the principle.

To a degree you need to know how far you can stretch a bluff. It was only me now.

I’d been left coldly. My friends had left to the airport to Nepal without waiting for me. I was left alone in the scam tour office, with two Indian men and a scam to get of.  I was girl with a bit of street smarts but still naïve and scared.  Truthfully, beneath my bold mask, I was very, very nervous… and scared. I knew my chances at getting a refund were slim and my chances of pissing of the volatile agent was great. But now I was also pissed by the way my friends had left me in the office alone. Something like this could some day be forgiven, but never forgotten.

No, I would stand the fight and I would win.

I ruined my trip with a knife, I wasn’t about to cave in to an upgrade it for a machette.

The challenges of dealing with a Delhi tourist scam like this?

To a degree, you have to how to play your cards and bluff confidence, where you don’t have it. I don’t play poker and I’m not good at lying, so I didn’t know if I pull off a bluff. I would find out.

This was the  wall to hurdle:

Thus, I needed everything to be resolved here and now or kiss my money ‘goodbye’.

How I got my money back from a Delhi scam tour

Obviously, this won’t work in all cases of scams. But it worked for me.

In the end, the agent had no choice but refund me a chunk of my money. Know that even if the law is corrupt, Indians probably don’t want to deal with them either. The agent was so heated, he practically threw my money at me. I got close to half of my money back. The chunk he returned was more than what Margaret and Dan bargained for or thought I’d be able to get.

I left the office with freedom at my heels, rupee smarter and loads lighter!

Now came the next adventure. Getting to the airport to catch my flight to Nepal … and doing so on my own.