My solo first day in Varanasi was a nightmare!

Sometimes with travel, things don’t always turn out as planned.

But what happens when nothing goes remotely as you expected?

I flew into Varanasi in the afternoon. When I got off the plane, my guesthouse driver was there to greet me holding a white paper with my name written on it. I was proud. He was on time; ready to scoop me up! That airport pickup fee I paid to my guesthouse felt worth it.

Ha ha! This solo traveling thing isn’t so bad, I thought.  Things were looking up.

My driver went to the car and loaded my bags in. He opened the door for me and my smile dropped…

1.  My pickup van was a run-down vehicle with dirty-looking removable seats barely hanging on

Would I have to balance my weight to sit on this? Didn’t look like it’d be a comfy ride or safe one. Gauging from the small van windows, the Indian heat would have me sweating bullets.  But then something happened. When he twist the keys in the ignition,…

For an hour, the driver and his buddies struggled to jump start the car .How many Indian men does it take start to a car? Apparently… five.

One to steer the car and four friends to push it. After 45 minutes of trying it this way, my driver picked up his phone and reported the news to my guesthouse. 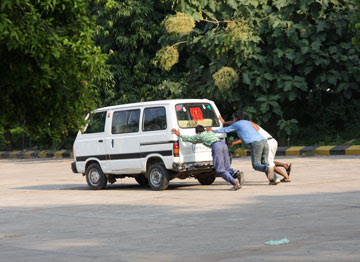 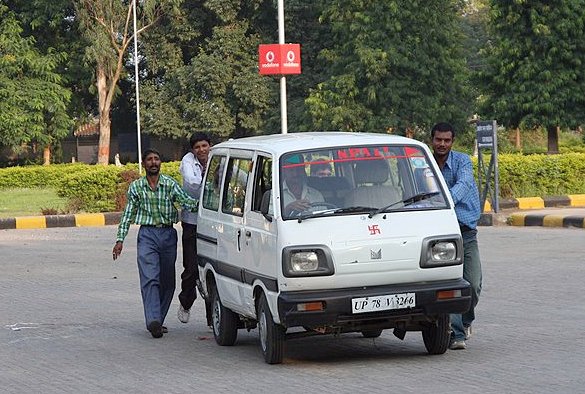 Four drivers pushing the van as my driver steers

How long? I ask

Not long, was the reply.

An hour went by.

The airport parking lot was now empty. Only a few cars remained and there was no sign of the replacement car. My driver was chatting with his buddies under a tree.  I was getting nervous. Being the only woman alone in an empty parking lot with strange men, wasn’t a comforting thought.

So I went up to my driver and asked again- How long?

My driver called the guesthouse.  Answer: When they find another car. About an hour.

Weren’t they already looking for a car when my driver phoned in the first time? Weren’t there backup drivers somewhere?

I was upset but I didn’t fully show it. It wasn’t hard to see I was both, out-numbered and at a disadvantage should anything happen.

Being a single female alone with strange men in a deserted  lot, you start imagining potential ways of self-defense and hypothetical scenarios for crime to take place.

Fortunately, the guys were okay. My driver brought over some chai.  It’s small compensation for this long wait, but I take it with a smile and sip it slowly. I share my cookies with them. There was nothing left to do, but watch some airport workers take a break and play a match of cricket in the parking lot.

Cricket is the national sport in India. It’s as big as soccer is to Italy and baseball is to the US.

Finally, my new ride arrives. It’s a four wheel-drive truck! Seats strapped in the way they should be, no air-conditioning. but the front seat window down.

3. When the ‘Shanti’ bubble bursts

In India you occasionally hear the word “Shanti“. It means “Peace“. More often, you hear tourists using it. Well, I was hardly feeling very shanti.

I’m not sure what impression I had of Varanasi, but I guarantee you it was a romantic and highly idealized one. ‘Spiritual’, ‘Holy’, ‘Reverent’… full of ‘Shanti’ (aka peace).   Varanasi’s got all of this but my imagination held more grandiose images of a riverside city, wafting in incense as men in white dhotis serenely chant mantras and bijans…

This was all erased by the noise, sooty air,  the traffic and…  coughing. Where was the Varanasi of Laaga Chunari Mein Daag?

Tip for India: Never have expectations, especially not Bollywood ones!

While Hollywood has fantasy films and illusions of high life living, there’s an aspect about American films which strive to communicate American lifestyle realism honestly.  Bollywood’s realism is independent films , while popular commercial films are of a more fantastical one.  I know, I know I shouldn’t expect Bollywood depictions to be accurate but …

When we finally got into Varanasi, all looked like a condensed polluted madhouse. The air was brown, buildings showcased dilapadated architecture and were connected by a mess of telephone wires, not to mention, the traffic on the road was the worse I’ve seen yet. Every vehicle, rickshaw and bicycle or two-legged, four-legged being was swerving in near death collision.

Method to the madness? 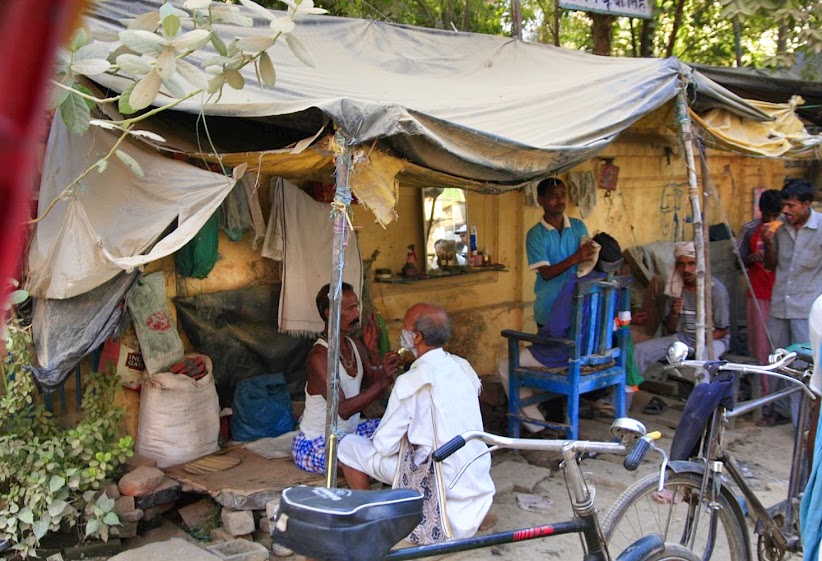 4. Where is my guesthouse?

Finally, the driver lets me off at an intersection because the road into the ghat area is blocked off from vehicular traffic. Tuk-tuks, cows, bicycles, crowds of pedestrians are everywhere.

The streets are all lined with crowded shops and shoppers. The heat is brutal. The swarming crowd is thick.

The driver tells me I  have to walk to my guesthouse. But that’s not what the guesthouse website says… He makes a phone call and in seconds,  a wiry boy emerges from the busy crowd of pedestrian shoppers. The boy hoists my backpack up and then weaves and dodges through the crowd as I run to keep up with him.

After a fifteen minute sweat-walk through dusty, polluted streets, a maze of back alleys sitting behind riverside guesthouses and walkways painted with red betel nut chew spatters, cow poop, trash and flies, I finally reached the Ganapati Guest House (read my review). If it were all about first impressions,  as a first time solo traveler in India, I wasn’t having a very good one. 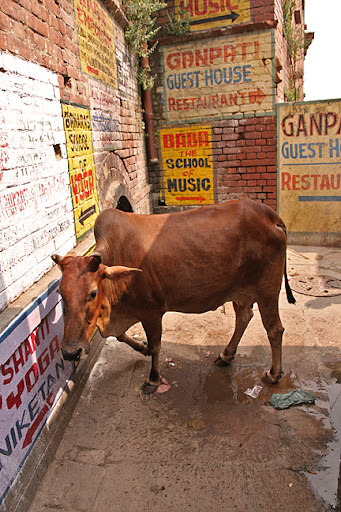 6. My hotel room: the “stable” with a shared balcony

The front desk is unapologetic about the driving delay or the failed engine on my pickup car. They lack warmth or smiles. A boy takes me to my room, opens the door and hands me the keys. My new double bedroom with a “Ganges view” with a ‘shared balcony’. The balcony is in fact, shared with the entire floor and anyone who cares to walk onto it. There are no windows, one ceiling fan circulating… heat and it’s shitty humid air.

Every imperfection is snow-balling into a landslide right now. My guesthouse feels like a dive …and now, this large sweat-box of a room, with no windows, is killing me. It feels like I’m in wooden stable situated above the river. The bed sheets are not white, but the shade of having been washed in the Ganges.

It’s all been a bit of a culture shock. I’m inches close to calling in my Hyatt or Sheraton points and moving to somewhere else. Yeah, I might be coming from a spoiled perspective. Maybe I should be more open-minded about these “guesthouse” deals. But this is a huge let-down and I’m suffering it alone.

In ten minutes, I discover I’ve two resident geckos the size of 5 inches long and 2 inches wide. They’re on my wall and over my bed.

Being from Hawaii, geckos “come” with the house, they’re like light fixtures. BUT “Varanasi Geckos” are giant and overly-fed, making them  look lethal. I’m afraid they’re going to eat me alive as I sleep! What if one of them falls on my face while I’m sleeping and suffocates me?

And if worse can’t get worse-r,  the flourescent lights in my room attracts huge flying ants, termites and random bugs in large quantities. The word I’m reaching for is SWARM

I washed a shirt and hung it up near the light to dry and in five minutes it was infestation with bugs of all types.

It’s really freaking me out. 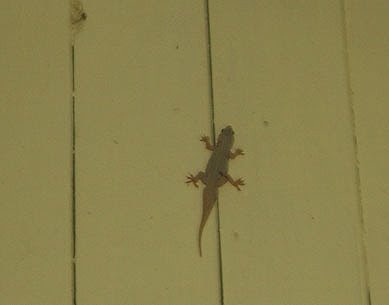 It’s 12AM, the last hotel light went out in my hotel.

I’m outside my room smoking cigs to kill time with my room light off . I’m seriously contemplating how weird it’d be if I brought my sleeping bag out and slept on the tables outside….

I go back in & attempt sleep.

8. Suffering the most insufferable night

In my silk liner

, wrapped tight like a mummy, sweating profusely, I’m paranoid and afraid to reveal ANY skin to the air around me. The moisture on my skin might tempt the bugs and mosquitoes .

I pull my liner over my face.

My hair is wrapped in my mosquito-sprayed bandana & every little “itch” grows bed bugs in my mind. This is torture.

Right now I’m not crazy about being alone. I want to whine. I want someone to share my misery with me or at least to laugh sarcastically with as to this situation. I’m overwhelmed with my situation. Nepal was so much slower and …cleaner.

A traveler told me that it will take a couple of days for me to adjust to Varanasi and get the hang of it. He says the city is really FUN. Right now all I see is ‘Yuck’! I wondered what the difference was between a “Guest House” and “hotel” …this could probably be the quintessentially worst definition.

Sleeping with one eye open…

The next day, I changed rooms .

I complained about the bug shack of a room I had and upgraded to a palace with ahhhh air-conditioning.

This cost a 100 Rupees more than my last room (a $2 USD difference). It was too much of a room for me, so I picked up a fellow traveler, Lee (from China) to split the cost of the room. Tonight I