Yulpo Beach is  10-minute bus ride south of the Boesang Tea plantations and an excellent stopover after a day of trodding around tea farms, but today the weather was a dreary, overcast and the sleepy town didn’t rouse much life. It is fall and summer resort season in Yulpo has ended and the nearby water park looked as dry as the town’s streets. An eerie calm prevailed over a light scent of rotting fish corpses. Quiet seaside towns make me nervous when they get this quiet.

Fortunately, the Yulpo Seawater Green Tea Spa was inviting and warm, defying the town’s ghost town demeanor. A relaxing soak in a rejuvenating bath of green tea was just what my friend, Chance and I needed!  We wanted pampering and needed time to figure out our next move. Dare we find a minbak (Korean guesthouse) in this ghost town?  I don’t think so… Bed down in Boseong? Or cut our losses and head out to Suncheon to makeup for sightseeing at the crack of dawn tomorrow?… This took meditative measure.

The spa was a simple two to three-storied bathhouse with two exclusive levels: one for men, the other for women. The inside of the female section had a locker and dressing room, a sauna and three pools (hot, lukewarm and cold) of seawater. Being it was a slow day, we had the spa to ourselves with the exception of two mothers with their children. 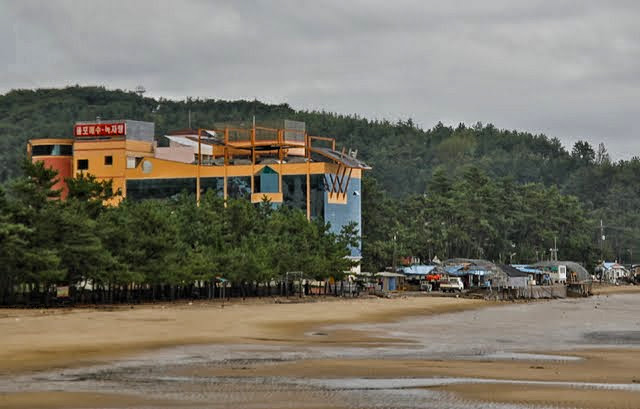 What is the color of green tea at Yulpo’s Green Tea Spa?

The tea at the spa appeared the color of rust.  I have no idea if it had to do with the oxidization of seawater or what, the color of that water looked suspect. The Koreans around us however, seemed fine soaking in it, so I decided to trust the full dip.

My skin didn’t glow any younger, my dimply cellulite remained spongy and I don’t think I felt any more energetic than when I entered.  But it was relaxing and if we were in “saltwater green tea”, then that was something new and different from the standard bathhouse! Westerners, their fear of Koreans and Korean bath culture

Western men have a harder time getting down and naked in Korean bathhouses. This is what I’m gathering from fellow male K-bloggers such as Christo of Kimchi & Eish! and Nick of Bathhouse Ballads ; moreso than women. Perhaps it’s that western culture views male public bathhouses in a more homoerotic light and that Korean men tend to be unpredictably homoerotic, when it comes to curiosity, personal space and friendly guy-to-guy touching.

For instance, male to male affection, such as boys holding hands in public, playful caresses, touching each others’ hair, skinship, etc… is all acceptable.  Furthermore, I’ve seen Korean men express forthright interest in their desire to befriend the male foreigner.  Yes, I’ve been in situations where Korean men have oggled, oohed/aahed and practically, stepped over me to approach western guys. If it makes me uncomfortable to be around western guys in that position, I can only imagine how western guys must feel in Korean bathhouses. What do I like about Korean bathhouses? Being a hapa  Asian woman in a Korean bathhouse is like being in one giant watery womb of serious washing! It’s neither sexual or sexy, but actually nurturing and maternal.

Aside from scraping off chunks of dead skin to feel clean or relaxing in a hot tub, I love to watch the interaction between Korean moms and their children. Korean women come in all shapes, demeanors and sizes from firm, thin, flabby and ajumma saggy. Surprisingly, the bodies most beautiful to me, aren’t physically fit or model thin. They are motherly bodies, which carry the soft weight and battle wounds of child-bearing or the impressions of tiny, tantrum fists.

Children crave physical affection and seek intimacy with their mother and I love that Korean families seem attentive to this in their child rearing. When I was a little girl, I loved taking a shower with my mother. We’d take turns scrubbing each others’ backs. Bathing together was a natural mother-daughter bonding ritual and it’s contributed to the unbroken ties of affection my mother and I continue to have today.  I wish American society had bathhouses, as well; unfortunately, I don’t think the western world is ready for it.

Getting There:  From Boesang, take the bus to Yeosu ; the bus bound for the plantation continues on to Yulpo.  Ask the driver to drop you off at the stop near Yulpo Haesu Nokchatang (“nokchatang”). When you get off, take the road perpendicular to the main road (it’s the road just before you hit the beach). Walk approximately 8 minutes and you’ll see a yellow building,  Yulpo Haesu Nokchatang.  Bus fare from Boseong: 1,300 W.

Previous Post
How to get to Boseong Green Tea Fields (from Daegu, Gwangju, Suncheon)
Next Post
The Hike to Gatbawi, Daegu