If this video isn’t playing, you can watch it here: http://youtu.be/cOm3k1l5vPM

Imagine someone says you’re going to stay on a “floatel” for the next two nights.

What would you think?

I had no clue.  But I love surprises and experiencing things for the first time.  I appreciate being whisked off to some place I’ve never known before. Some place unique…. different.  I love accommodations which have a unique flair and take me outside the tourist norm. 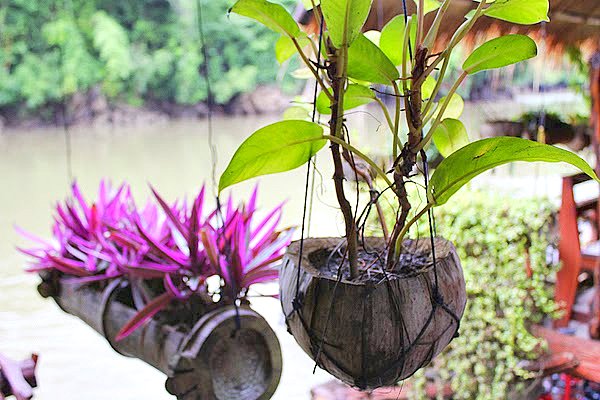 On my tour of Kanchanaburi  with Khiri Travel, we were told that for the next two nights, we’d be staying on a river, surrounded by jungle.  We’d board a boat taking us up the Kwai Noi river, see some majestic jungle river scenery, be given gas lanterns at night to get around with, eat in candle light and wake to bathing elephants in the morning. It all sounded so romantic and cool;  definitely, not your everyday backpacker haunt.

But then, on the ride  into Kanchanaburi, we were told there would  be no electricity at our hotel. It finally sunk in… no power outlets to charge camera batteries.

Part of me was thrilled with the idea of staying at such an unusual accommodation; the other part was in mild panic, wondering if my cameras could sustain three days of sightseeing without recharging.

I had been in “un-plugged” situations before and they always felt liberating. Invariably, there are times I feel burdened to document all my experiences.  Sometimes, I’d like to just throw all my bags on my bed and unload all my stuff as soon as I arrive versus, going through my room shooting its untouched appearance first. I’d like to eat my food without having to wait until I’ve finished shooting it.  Like washing your hands before you eat or waiting until Christmas morning to open your presents, … practicing self- restraint can occasionally feel like a dumb chore.

What is the River Kwai Jungle Rafts floatel?

Firstly, a floatel is a floating hotel on water.

Running since 1976, the River Kwai Jungle Rafts is one of the original floatels resting on the Kwai River in Kanchanaburi.  We took a river boat to get there and as we arrived, I discovered the entire hotel rested on inflated rafts, tethered to shore to keep from drifting away.

It felt wildly cool, like something out of a river jungle safari book. 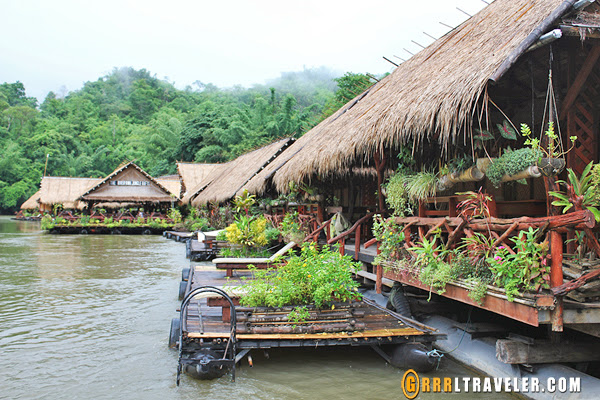 ‘Un-plugging’ yourself to melt into the timelessness of nature

Being the floatel didn’t have electricity,  each room was provided a kerosene lantern outside their room, for use at night. There’s a nice charm to maneuvering in such a basic and archaic manner. You feel removed from technology and also from time. Luckily, I discovered my external battery charger would keep me powered well (whew!), but I’d have to be selective with my shooting.  Especially since, between the Thai humidity, drizzles of rain throughout the day and boat splash, my DSLR decided it no longer wanted to work for me. Thank goodness I brought a backup point-and-shoot camera!

Nonetheless, a forced slow from technology, allowed me reset my ‘inner clock’ to the relaxing rhythms of nature and let go to the rustling wind in the trees, river frogs burping, crickets chirping and the constant gush of the streaming river. Due to rarity, this ‘letting go’ felt like a privilege and presented the best nights of sleep I’ve had.

Next, we had the opportunity to grab a life vest, jump into the river and have it carry you down.  Being this is something you’d do entirely at your own risk, it didn’t seem like a wise activity for me alone and unsupervised. I’m not a good swimmer.  Being from Hawaii, everyone expects me to be able to surf. I’m more like an excellent “dog paddler”. Sorry to disappoint.

The river was pretty swift on that day, partially due to the rain and unlike being on skis or skates, you can’t fall on your butt if you can’t stop. ( I also have a list of whiny excuses and a reason for ditching so early, if you watch my video).

While the water may appear off-putting and muddy, being a river, the water is actually considered clean to swim in as it’s not stagnant, but continually flowing. This doesn’t mean it’s drinkable however, and I’d avoid accidentally swallowing it.

The rooms at the River Kwai Jungle Rafts

My room was basic, but spacious and it felt quite like a luxury. I had two beds to myself, even though I was traveling alone and a full-service bathroom. Ka-ching!

The mosquito-nets seemed necessary and I was grateful for them, as being on the river, mosquitoes in Thailand are common.  Each room also comes with it’s own hammock and you’re provided with two free bottles of water.

At night all is aglow with lanterns.  It felt like a cross between jungle ruggedness and romance.

Bugs are there, of course. You’re on a river in the middle of the jungle. I was watching a performance the Mon children put on each evening and for a good chunk of time, many of us were fixated on a the humongous gecko lizard hovering on the ceiling above us, ready to dodge it’s falling plop!-down. 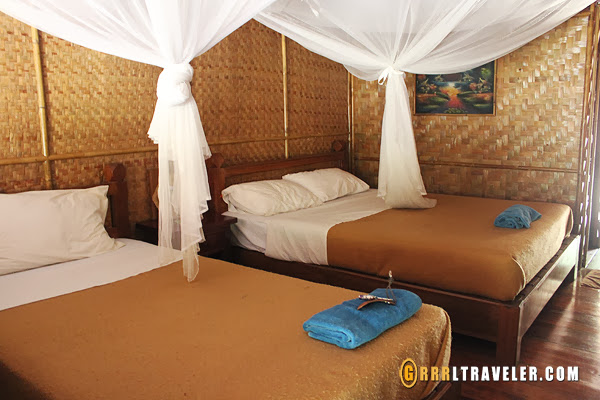 Mosquito nets are provided to keep your sleep bug-free. 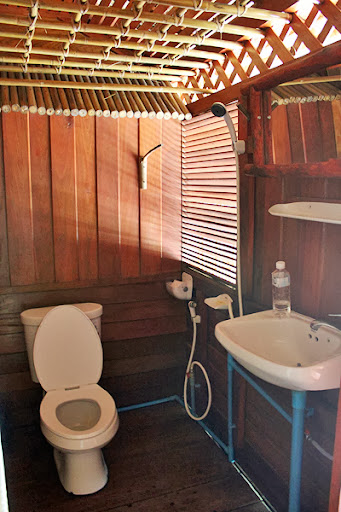 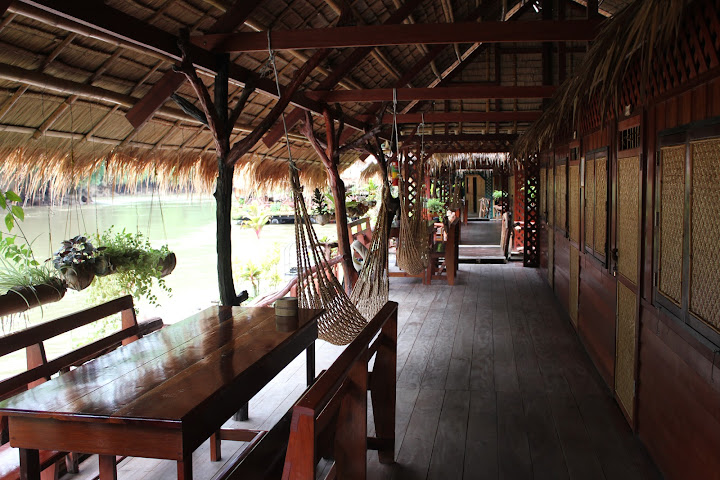 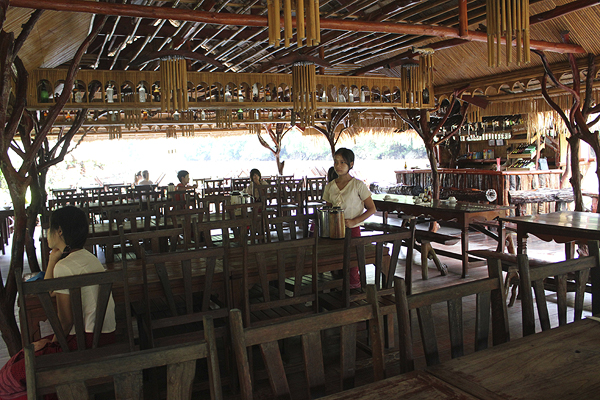 I have a fascination with the minority hill tribes in Southeast Asia.  I’m attracted to their unique cultures and their ability to survive in jungles, mountains and remote regions, and often, the opportunity to observe their culture makes up one of the big reasons I love to go trekking.

Being that Kanchanaburi is near to the Myanmar border,   I learned about the Mon people, a tribes group originating from Myanmar|Burma.  They have a village up the hill from the River Kwai Jungle Rafts (that you’re free to explore in your spare time) and a handful of their youth work at the floatel, either as servers or traditional dancers at evening performances. Originally, I got them confused with the Hmong, (another ethnic minority common throughout Southeast Asia) but the Burmese influences in their dance, the longhis worn by men, the Mon temple and it’s replica of the famous Golden Rock in Myanmar were all telltale signs that my original guess was wrong .

It’s possible that due to the hotel’s success, it’s helped their community. Parts of it feel tourist-oriented as the community strives to make money off of visiting travelers. Their village surprisingly, has a generator and one house I noticed, even had solar panels and a satellite dish.  So much for the rural romance. 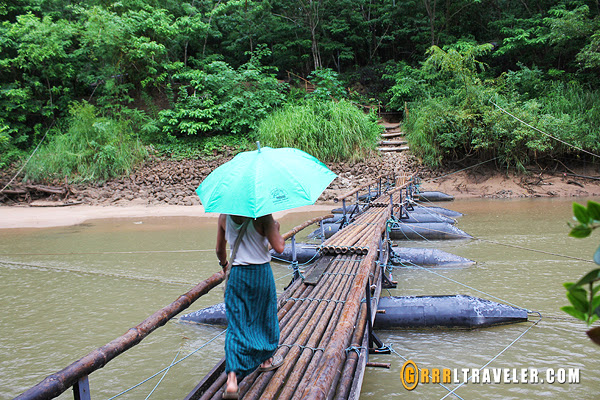 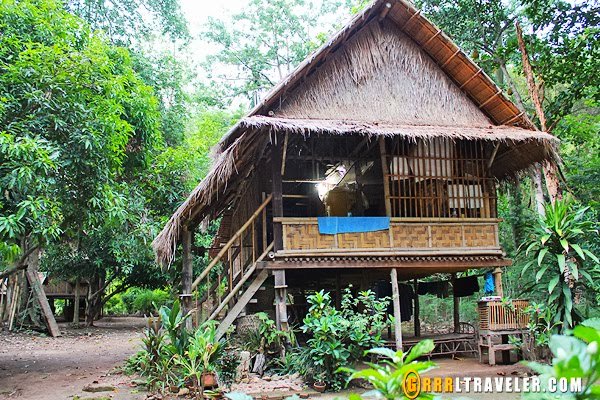 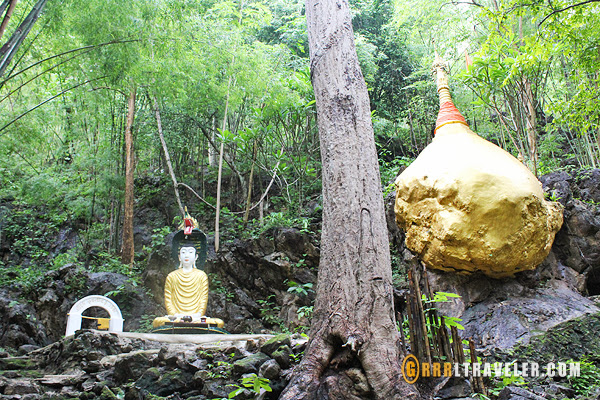 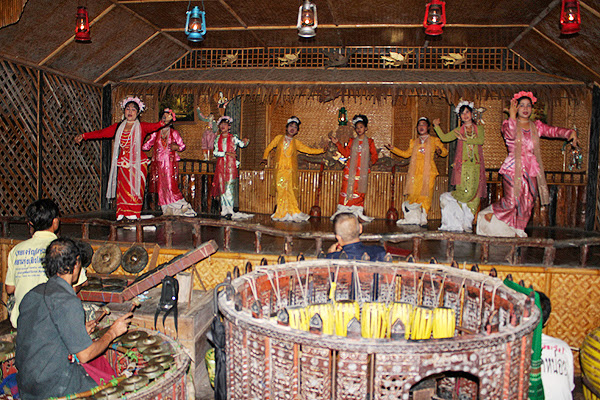 Elephant Bathings and feedings in the Morning

In the morning around 7am, there are two resident elephants, which enjoy coming down to the river for bathing and feeding.  Seeing elephants in Thailand is common.  Historically, elephants were known as animals belonging only to royals. Our guide Bummie, told us that all throughout Thailand, if you ever spotted a white elephant, you’d need to take it to the royal family, as those were considered highly auspicious.

Guests are allowed to take part in the feeding, when the mahouts (aka elephant handlers) haul out boxes of pineapples. This fun activity is free of charge. 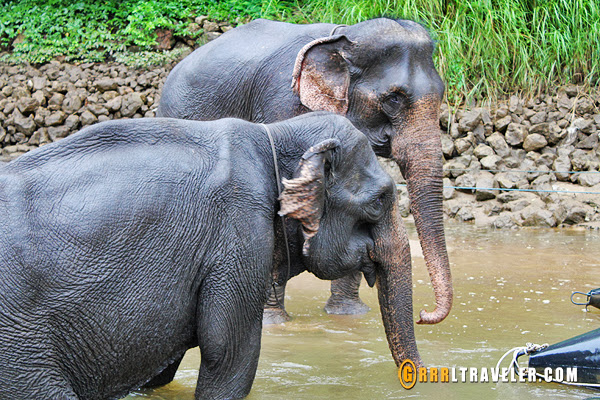 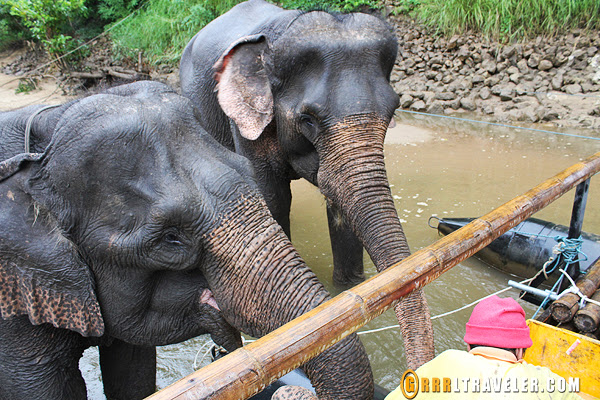 All in all, my time at the River Kwai Jungle Rafts felt too short.  I’d recommend this hotel to all types of travelers- families, soloists or those in groups.   I’ve stayed at a lot of luxury hotels and resorts under the guise of work, but the River Kwai Jungle Rafts, in my opinion, tops them all. It combines all the elements unique and beautiful about Kanchanaburi and serves it up in a hotel. For me, it wasn’t just a “stay”, it was an experience!

It’s a wonderful opportunity to unplug yourself and fall back into the timelessness of nature.

What you want to bring to a floatel:

•  A flashlight as a backup.
•  Make sure your batteries are fully charge or carry an external charger if you’re staying extra days.
•  Sunscreen
•  Mosquito repellent
•  A spirit of adventure

What do you think of the video or of the hotel? Feel free to leave your opinions below.

Note: This two night stay was sponsored by Khiri Travel in relation to River Kwai Jungle Rafts; however, the opinions expressed here are definitely my own. This post also contains an affiliate link. If you end up booking through Agoda I make an eensie percentage of profit at no additional cost to you… a win-win situation.

Must Have Travel Gift Guide for Solo Travelers