English Summer Camp in Korea: My Superhero Factory (Part I) Monsters & Superheroes: My lesson plans for emotions and actions

Seems I’m churning out more little Superheroes than I am monsters! My students have been doing well with my lessons- I was right- Emoticons, Monsters  & Superheroes make an entertaining mask for teaching feelings and actions! 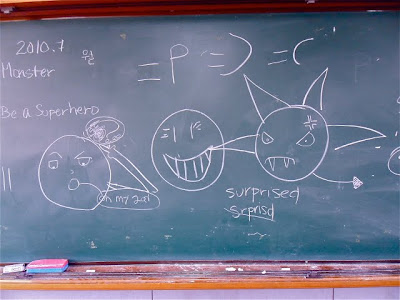 Students draw “Confused”, “Happy”, “Angry”  on the board

I’ve been moving quickly enough through the lesson and games, so my students don’t get bored and the superhero videos I show have them hooked.

What can I say- my job was entertainment!

Even some of my attending co-teacher/supervisors accidentally got into it- when asking my students which superpower they would choose if they had a choice, I had a teacher (who had been trying to study, but being unsuccessful at it in my class) lift her head out of her book and yell Teleportation!  Well, I didn’t know what to do with that– it was the first time she spoke and the word was too big for my 3rd-6th grade vocabulary list. (I’ll be posting my lesson plans and ppt at mycrazykimchi.blogspot.com very soon)

But X-men, Hulk, Ironman, Transformers and the Fantastic Four… despite what my co-teachers at my school have said, so far at least one or more students have been familiar with popular Hollywood superhero films, as well as films like Pirates of the Carribean, Alice in Wonderland, and Charlie and the Chocolate Factory.

Yeah, exactly what I thought… sometimes I feel like my co-teachers don’t know what kids  like and advise me the wrong way. 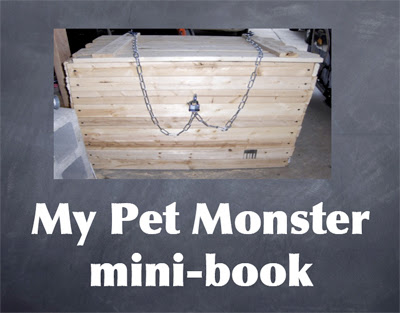 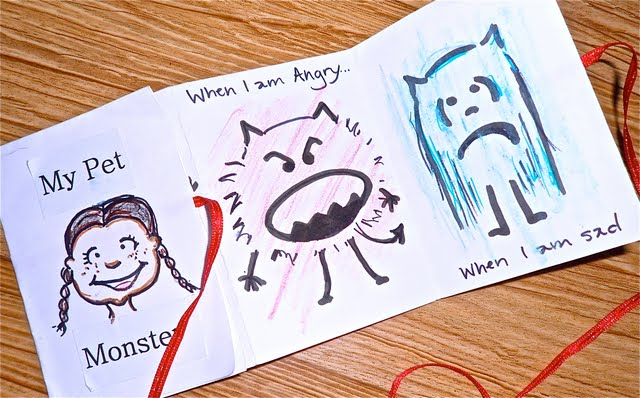 If you want a popular class, teach a cooking class.

Yes, It’s possible a ham and cheese sandwich is beating out my Monsters & Superheroes.

But that’s okay, fellow EPIKer Nhim is doing a bang-up job as  a chef teacher and even if I had to do it again, I’d still make the same choice. But it goes without saying– Koreans love to eat.

Thus, Korean students will like enjoy anything that weaves in their favorite love for eating.  In fact, I can almost never eat anything in front of my students. The moment they see my jaws chewing, all the attention is on me and the panhandling hands come out.

It’s always the first class that suffers a bit

Sometimes, your first class gets the short end of the stick because you’re testing what works and what doesn’t with them.

My first day was my practice day, where I worked on timing my lesson and activities to the 2 hour duration. Thankfully, that day I only had 2 classes and by day #2, I had the kinks worked out.

Unfortunately, one of the classes that got short-changed was my homeroom class, who will be using that information to do Superhero skits for our talent show tomorrow! 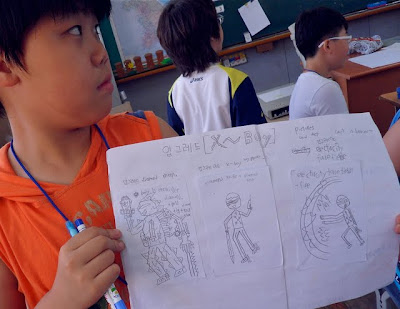 My homeroom student creates his superhero for the talent show, X-boy
(& he made the mini book I didn’t have time to let their class do!)

Yes, tomorrow is our end of camp talent show.

I hear most of the homeroom classes are performing songs.

Mine will be doing superhero skits, which made my CT’s a bit nervous yesterday when the students appeared to be behind our time line.  They recommended we change to a song too. Yeah, another song. I convinced them we should stick with the original plan– the students were too invested and excited to work on their superhero scenes. Plus, there’s a few things I trust about human nature:

* When people are under the gun of a deadline, either they drop the ball or they pull out something brilliant.
• When the work will be performed in front of a large audience, the probability of Korean students dropping the ball, will be less likely than them working hard to catch up and show well. 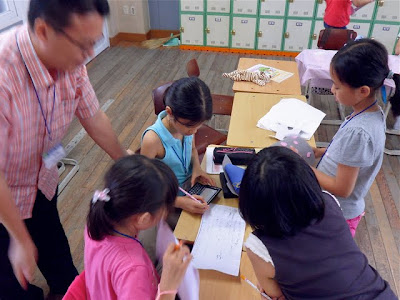 A superpower girl team work on their role-play ideas (yes, that’s a translator that student has! Tres serious) Girls practice their skit: Am interview with Super Cat Woman

And today, yes, they were ardently working on their skits and costumes, enough to do Superhero Mama proud! How well it will fall together, I don’t know yet.  It’s guaranteed to fall together somehow. The only thing that’s certain… 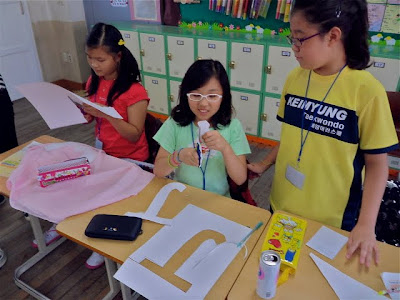 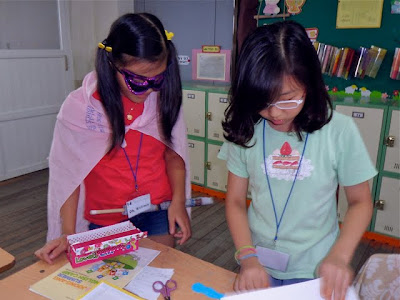 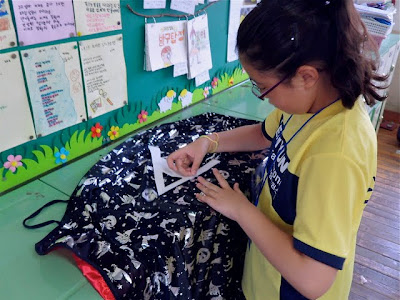 • Kids will be kids Teaching in Korea: EPIK vs a hagwon, which is better? How to Teach English in Korea & Mock Teaching Interviews