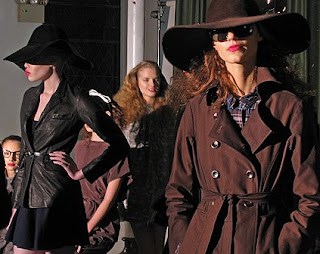 This is my first time shooting at the Mercedes Benz Fashion Week 2009 (Feb 13-20)! Did I see a catwalk under the Bryant Park tent with paparazzi and glamorous celebrities? No. Models walking the infamous catwalk? Nuh-uh. I was in the basement of a nearby church on 38th street shooting an indie fashion show where instead of a catwalk, the models pose together around a chair and a sofa as if on a film set of I’m Rich, Pre-Pubescent, Beautiful and Bored.

But who cares? I’m in the realm of beautiful thin people whose legs are the size of my arms and I’m also standing next to a ‘Bake Sale’ table to remind me of human temptation.

Think “organic“, “cotton”, “sustainable style”, “recycled fabrics & textiles” and if you’re in fashion, you may guess the indie designer of this show.

Eco conscious designer, John Patrick Organic is known for his high-end sustainable style (all made from locally grown/raised organic textiles, fibers and animals) and he’s showcasing his 2009 Fall Line in a David Lynchian film noir way.

The program brochure for his collection  looked like a restaurant menu, listed each model’s name with their corresponding outfit and the ingredient textiles used. Perhaps most of the people who attend these shows know their “model names” so locating the fashion isn’t a chore, but for laymen people such as myself, the “textile of ingredients” listed on program are my puzzle clues to finding the model! And when in doubt, color and wardrobe indicators like “black lace dress” help to bring your possible picks from 10 down to 2. 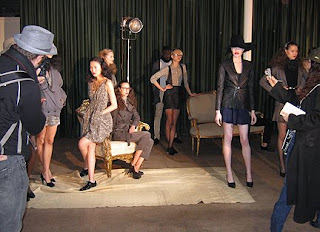 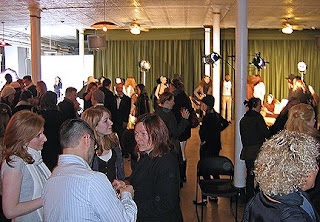 Makin’ Model Bacon: How much do models make on a fashion show?

As I was taking a break from my shooting- not much great live action to shoot if there’s no catwalk- I was told that the shows recycle the models and later, the same ones may reemerge in other shows. The rumor is that models can make anywhere up to $10,000-$30,000 per show! It makes me consider starving myself and going into the profession (and without grocery bills, i’d have even more money! ) But these models are here not only because they’re sans fat, but because they are good at what they do.

When the camera is on and pointed at them, they can make the seemingly dead & ambivalent come alive while still holding the “I’m a mannequin” pose. It’s a bit disturbing at first, as a camera person because its like having a live mannequin look and engage you with action, while still carrying a void in their eyes as if not really acknowledging you. Some of them break code every once in a while- a bit of human warmth- in an “almost smile” or an accidental snicker when a nearby model-friend whispers something under her breath. But when the slip happens, they draw it back in and resume stone-cold power! 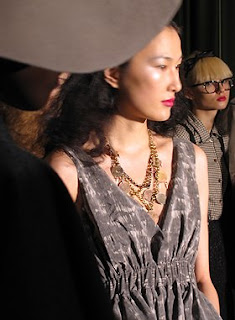 John Patrick gave each waiting industry trade rag or publication a 5-8 minute tour between his models, explaining his inspiration and each fashion, etc… DBTV (my crew and next in line) was promised an interview for its online coverage of fashion week but at the last-minute the interview was dismissed by J.P. and we we were iced by the publicist for more popular publications. I assured our director/host, Josh that I covered some of the interviews J.P gave with others should we need sound bites on his 2009 Fall Line. Still, there was a note of disappointment followed by a soft blow of being given an industry icy shoulder. As we were packing up and the J.P. crowd and paparazzi had started receding to show the male pattern baldness of time (there was NO ACTION to watch & “baked goods” will only get as far as the first bite and then be hard to swallow after you see the models), our leave was intervened by J.P.’s publicist saying we could do the interview now. Well, DBTV being the “small publication” it was, declined to take J.P. up on that offer!

All’s well that ends well in the war of egos and egos in fashion!

Learn how to grow a YouTube channel and build a bullet proof brand and income in ways you and your fans will enjoy.  Let’s change your money making influencer game!

Grow your Income with Youtube and Blogging– Be an influencer and get PAID!