Do you have a penchant for attracting certain situations or people when you travel?

In the U.S., I have a knack for stumbling upon film sets… frequently and randomly. Occasionally, when I’d decide to detour from my regular homebound path, BAM! …actor trailers, grip truck, crew folk running cables,

Of course, living in booming entertainment industry cities such as Los Angeles and New York City, I know it’s not improbable to happen upon them. But according to friends and their lack of frequency to the occasions, I’ve apparently a greater talent for coming upon them.

Interestingly, when I travel, it doesn’t matter than I’m thousands of miles away from my life back home, if there’s a production set within my five-mile radius, I’ll accidentally find it. Maybe destiny, dumb luck or the power of attraction.

…Maybe it’s the fact my work is tied to the entertainment industry or that I love foreign films. Perhaps it’s the simple fact that I’ve always been passionate about films.

But I’m a film set magnet.

And when I travel, I continue to be one.

Table of Contents: VIDEO: Filming Around the World

Is Action! a universal word for all directors?

Seeing productions around the world, I like comparing them. Most aspects of filming and crew appear standard, but the culture, costumes, drawbacks of an environment and technology, all have flavorful tweaks.

My very first experience seeing filming abroad was actually in the remote countryside of Nepal. I was passing a country quarry on my way back from my day’s excursion and saw a small truck with noticeable grip (aka lighting/electrician) flags.

I had flown thousands of miles to a country cradled in the Himalayas, to see my first overseas film set.

Unique travel jobs and …what’s in a location?

If you were to ask a location scout or film crew folk, what the most beautiful or memorable film location they’ve shot in, you’d likely have some interesting views of a place.

Crew folks and actors travel a lot.  It’s one the most unique ways to travel in your own state (and occasionally abroad). Film locations can range from public spaces to exclusively private. Some locations might be mentioned in guidebooks, while others grant access privileges to highly specific situations (aka big budgets!). A location can be as personal as the back room of a store or as impersonal as an abandoned farmhouse you never knew existed. Off-hand, three of these places have garnered a handful of films and television shows in Hawaii, from Jurassic Park, 100 First Dates, Hawaii Five-O, etc…

My most memorable film location was the floor of the United Nations in New York, filming The Interpreter, with Nicole Kidman and Sean Penn.  The United Nations, as you can imagine, is very high security. Nobody gets in beyond the lobby, without having a worker’s pass and to get onto the U.N. floor, you have to be a leading representative of a country. For me, background acting was an occasional part-time job to grow extra income, while working on my freelance career in camera operating.  It granted me privilege into a lot of places, but so far, the U.N. was my highlight.

But onto travel sets abroad… When the world thinks of the “leading television and film industry”, they think of Hollywood.

India however, is the reigning producer of films in the world and it’s a multi-million dollar industry, finding an audience in over 90 countries. Bollywood is generally known for it’s musical-like films and highly emotional story lines. It’s generally last three hours long, with a planned “Intermission” break in between.

I was at Chhatrapati Shavaji Terminus (aka Victoria Station) that I happened upon either a TV drama or commercial production. While looking for my train  to get out to Chowpatty Beach, I saw a crowd and some lights. Filming anything in Mumbai, India

Now, everywhere you go in India, you’ll see crowds and that can be a potential drawback of the environment.  You generally have to secure an area, where there’s room for the actors and crew to work, without a whole lot of people trying to jump into the shot or stare into the camera. It’s called crowd control.

I think this production did a pretty good job, but it’s still blows me away (watch the short video below).

For over a decade, Hong Kong has been known as the Asian Hollywood. (Click here to read about the Avenue of the Stars).

You may not know it but Hong Kong is the third largest producer of films. Genres they were originally well-known for, were martial arts/ kung fu action films and Triad (aka gangster) films.  You may not know it, but most Chinese films come from Hong Kong and you probably know more celebrity names than you think:  Bruce Lee, Jacky Chan, Jet Li, Chow Yun Fat, Andy Lau, Andy Leung, Donnie Yen and directors John Woo and Wong Kar Wai.

So what could the streets of Macau offer me on a rainy day? I’d just finished walking exploring the neighborhood of the Rua De Felicidade and didn’t know what more there was left to see on foot. Wanting to escape the monotone commercial shops on  the main drag of Almeida Ribeiro, I dipped down one of the side streets, where a crowd was forming. 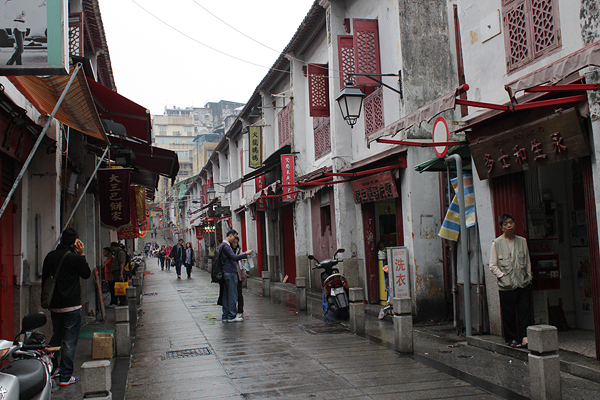 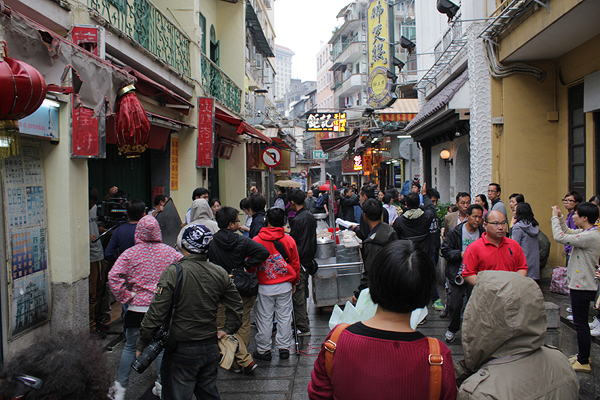 What genuinely threw me at first was the chop suey style of the crew, the extreme in ages and the low-key style of dress.  But clothing can be indicative of weather and comfort (and Macau doesn’t get very cold) and age could mean ‘experienced professionals ‘mixed with youthful strength and young assistants.  It was still a very interesting set to watch, especially as the actors prepared beforehand, running lines with the director. 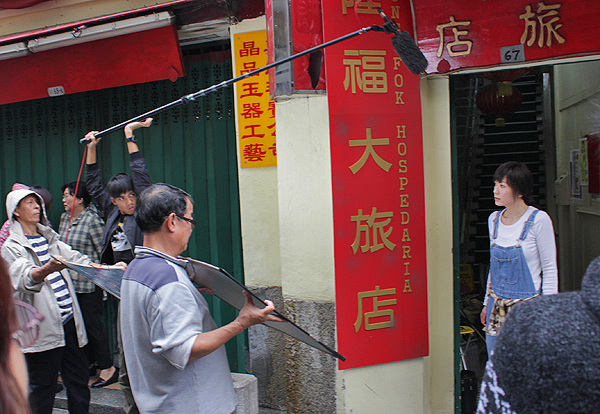 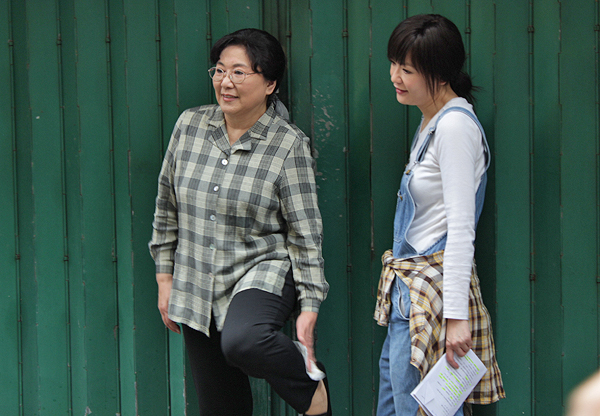 The director in the blue jacket to the right
Watch a short clip of what I saw and experienced in the video below.

Japan is the world’s 4th leading producer of films and they’re often known for genres, such as samurai, yakuza, monster film (i.e. Godzilla), quirky horror and anime, to name a few…

The Location:    Gion district in Kyoto

The streets of Kyoto’s Gion district (aka the Geisha district) are like an architectural time capsule of a historical Japan. Restaurants, tea shops and stores, Gion’s streets hold the hushed footsteps of geisha and its buildings are dusted with the age of  old merchant houses.  The streets are quiet and offer a secluded getaway from the hub-bub of activity.

I heard shouts down the street… Set location of the first scene

Production didn’t appear to be much more different than the U.S. At a glance, although the crew was small in comparison to the U.S.,  everything seemed normal. The main star acts as a “detective cop” Background actresses waiting for their scene Set location for the next scene down the street
Watch a short clip of what I saw and experienced in the video below.

I’ve not seen a Thai movie, since the 1999 film, Bangkok Dangerous (which was remade by Hollywood in 2008 with Nicholas Cage), but perhaps it’s time to give them some notice again….

When biking through the UNESCO wat ruins and giant buddhas of Sukhothai, the last thing you expect to see is a film shoot.

It’s really the last thing on your mind…

I was doing my tour of the Old Sukhothai Historical Park and the one most reknown site I was hoping to see was the Wat Mahathat. Unfortunately, it was slightly closed off for viewing that day.

They were filming a fight scene from the period movie, Kingdom of War (aka The Legend of King Neresuan).  I’ve only recently seen the sequel of this film, and I was blown away by the lavish style of the production and quality.

Didn’t know there was a Thollywood, but apparently, we can look forward to some good productions coming out of there. Note: Apologies for the bad filming. I’m not often well-equipped to shoot videos with my point and shoot or DSLRs. Most moments are so unexpected and happen so quickly and I’m fumbling to capture them in the process.

What are some of your travel magnets? Do you find many synchronous events in your travels?