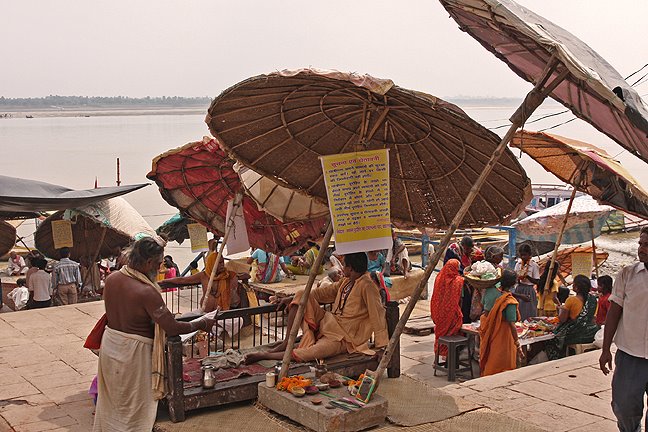 On the ghats of Varanasi

Today is my Rest day

It is my last day in Varanasi. I will let the Spirit of Varanasi guide me to where she wants and I humbly obey. Hopefully, she’s a bit more seductive and a little less buffeting this time.

First, the Spirit tells me to laze in the clean sheets of my ahhhhh AC palace. I enjoy time off from the heat, the stink, the cows and the scams. I hang out to the cafe patio, have a nice Thali meal (aka a dish comprised of small samplings of different curries, yogurt -for cooling- and rice) and spend time on the internet looking for a hotel in Delhi.

Finally, I “prepare” myself to go out & explore my satanic temptress– get lost in her winding streets, search her for burfis, jalebis and samosa snacks, shop her and check out the life on her ghats! 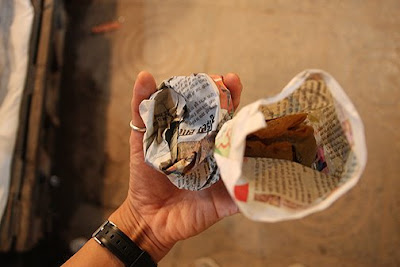 BROWN is an easy color to be in India

Pollution, noise, poverty and dirt are unavoidable in India and I can’t un-choose them. In L.A., it can take a week for a good layer of dust to cover your car enough to finger the words “Wash Me” on it. In India, I imagine it takes one day! There has not been a day gone by that my nails haven’t looked like I’ve been mining the fields and the color of my bra and underwear after a day or two of wearing, changes drastic shades!

The heat and humidity at this time of year, post-monsoon, is another annoying factor. I’m undergoing water-weight loss and despite my vigilant wearing of 30 – 50 proof sunscreens, within a day, the brown in my Pacific Islander genes calls to surface the “Hawaiian tan” I’ve been avoiding all my life! 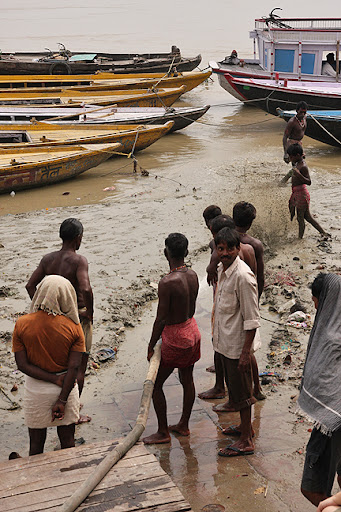 muddy waters at the riverbank

‘No Shoes’ policing at the Golden Temple

Due to the recent bomb scares around India & Delhi, Varanasi has been under high security this week of Durga Puja and Ramlila festivities. The Vishwanath Temple (aka the Golden Temple) is near my guest house and is the only tourist attraction I’m remotely curious about (churches & temples are my weakness). Its entrance has over a dozen policemen guarding it. NO cellphones, NO cameras, NO electronics… and NO shoes!

I am an armed artillery factory as far as these rules go with DSLR, video camera, mobile phones, etc.., but it’s really the effort of going back to my guesthouse to dismantle myself AND the “NO Shoes” rule kind of kills it for me. 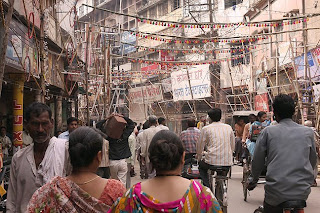 On the main ghat outside the Shiva temple, I see a group of young men looking on as a barber shaves one of their friends’ heads. A little ways down, I see mothers holding their crying babies as another barber shaves their hair as well. There’s a variety of reasons that Indians get their heads shaven, from celebrating a first birthday, to making an offering or even entering priesthood. 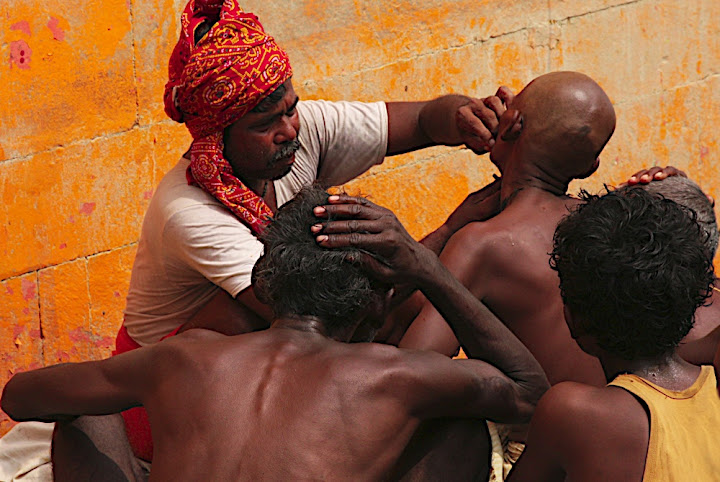 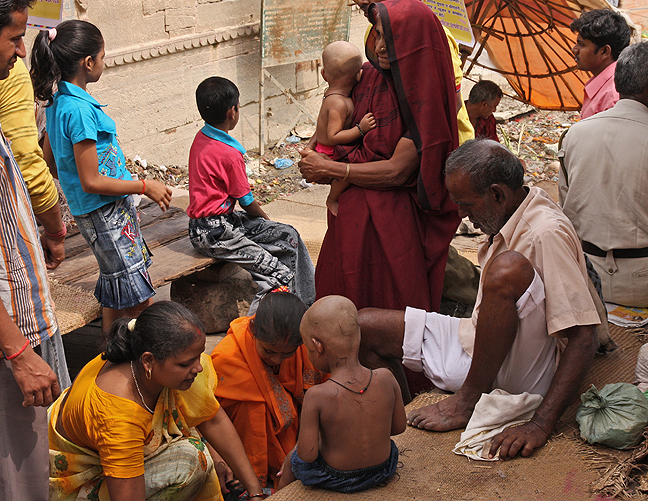 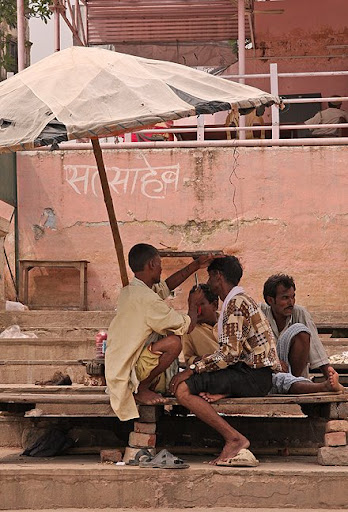 barber on the ghats

What are those red and white markings on Indian foreheads?

At the main Shiva temple I saw from the boat on my first day, I buy a garland of marigolds for offerings and enter the temple (I took my shoes off and walked with cupped feet, again!) The temple is home to at least 3 or 4 different deities of Shiva, each with its own altar. A priest resides at each altar to give you prasad and that dieties’ corresponding tikka (red dot marking between one’s eyebrows). 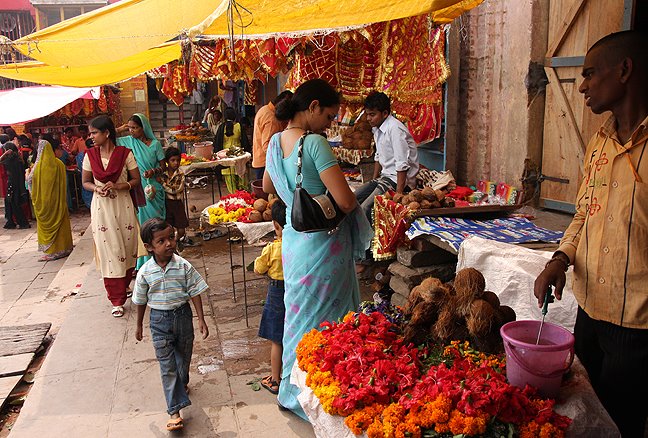 flower sellers outside the Shiva temple 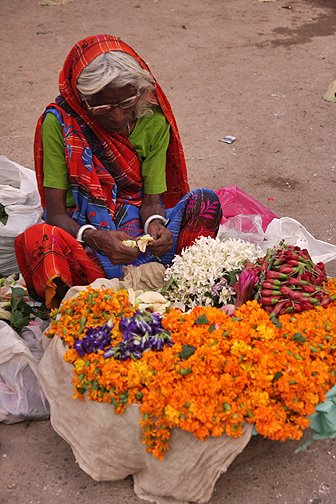 In India, there are three types of ornamental markings.

Bindi: painted red dot or a paste-on jewel over the spiritual eye of a woman. It’s always assumed that only married women wear red bhindis ; however, young girls can wear them also. Widowed women wear black bhindhis and in certain cases, some women believe the wealth or the health of her husband is linked to their bhindi and thus, paint large ones on. But in general the concept is similar to the tilaks or tikkas that people get when they visit a temple for pujas. 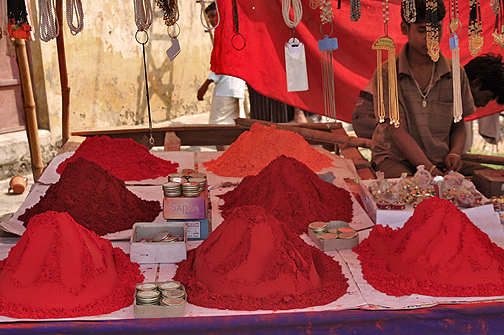 Tilaka (for spiritual men, saddhus and priests): As I’ve said before, Shiva can come in many forms; so apparently, do the tikkas ! This type of marking more than the red dot, but also white ash markings across the forehead. This is to distinguish spiritual men and priests from laypeople. However, you must also be cautious. There are many fake pundits in Varanasi who may bear this sign also.

Shaivas (Shiva followers) markings tend to be two to three lines drawn across the forehead ; whereas, Vaishnas (Vishnu followers) are drawn vertically. Here’s more info on the matter and pictures  at the Sanskrit organization (here). 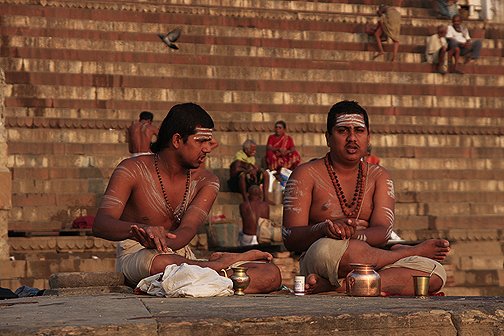 young priests on the riverbank: notice the tilakas on their forehead. Symbolic of Shiva.

The tikka I got was a huge round dot the size of a boil. Not a cute tiny sliver or neat, tiny pimple like others I had admired. ‘Big’ could mean ‘abundance‘ or maybe it just meant I needed to open my third eye more… I wiped some of it off.  It was huge. 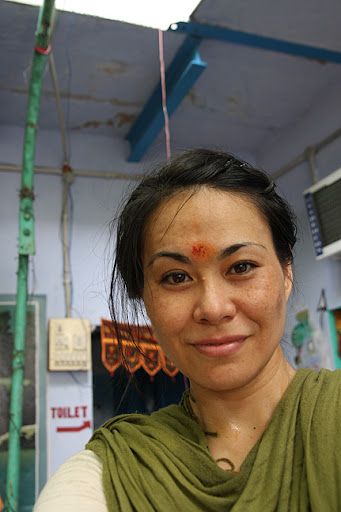 Sweaty and Tikka’d in Varanasi