The Ultimate Guide to Laos Transportation 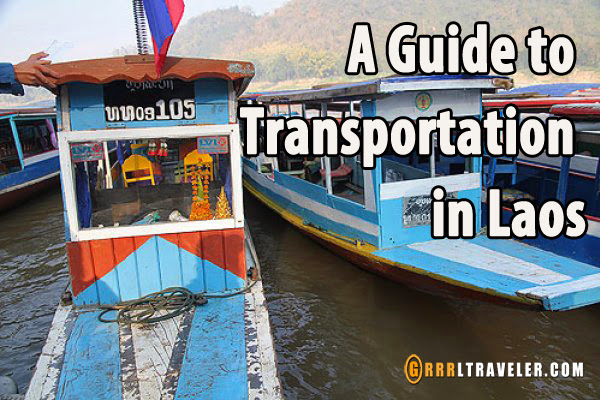 When I took the  overnight train into Laos, that was the start of my adventure with Laos transportation.  Getting around in Laos isn’t hard but it can be an interesting adventure. Check your expectations at the door and go along with the fun.

Laotian transportation can be easy, if you’re flexible about your schedule. While not always on schedule, there’s only a handful of ways to get to a place and often, it entails two or four wheels. Buses, songthaews, ferry boats, jumbos, bicycles and minivans… that’s basically it.

Costs don’t run high, but average around $5-15 for standard long distance trips. Prices are most often displayed and the only place you may have to get your haggling head out is for the Jumbo.

Basics to know about Getting around Laos by yourself:

Getting Familiar with Bus Stations in Laos

Whenever I roll into town and see a visible bus station (vs. a dirt lot like some villages in India), I exhale relief. Luang Prabang and Vientiane‘s bus stations were nicely run, well-maintained and clean. Even some of Laos’ smaller town bus stations are nicely organized and obvious.

In Laos, it’s not safe to assume that the bus station you arrive in is the same as the one you’ll depart in. For example, if you’re departing on a long-distance bus or mini-van, you may be directed to a second bus station outside the city center (Luang Prabang and Vientiane have two main stations). Arrivals are often at the more central location and inside the city. If you buy tickets from travel agents and guesthouses, they’ll send a van or songthaew to take you to the second bus station. 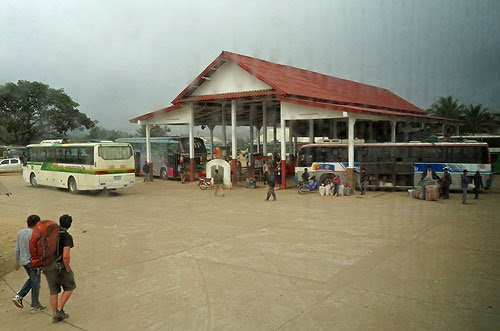 My VIP bus from Vientiane dropped me at the Luang Prabang’s central bus station, near the heart of the city. I walked into town, but it’s easier just to get a tuk-tuk. Buses above are long-distance buses. 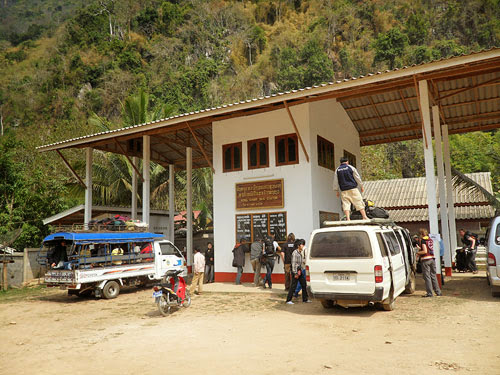 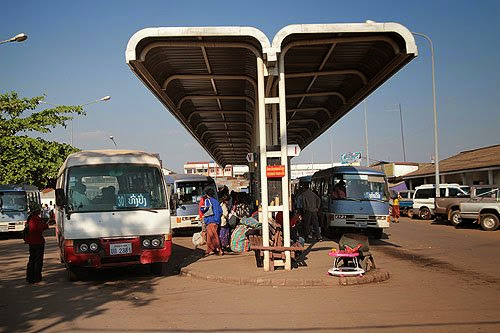 Vientiane’s central bus station in the middle of the city, located next to Talat Sao Market. For a long-distance bus to Vang Vieng, Luang Prabang, etc… you’ll need to go to the other bus station located 2 km northeast of town. Above: buses are the size of a small school van bus 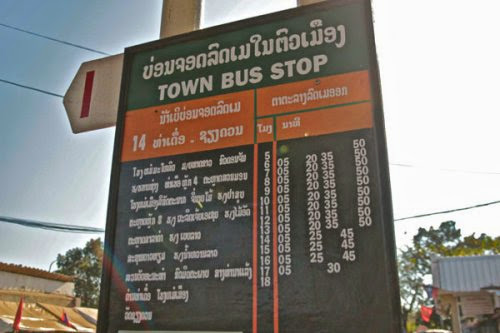 Most bus schedules are in written Laotian; but attendants are helpful in directing you to the correct bus. Towns that generate many tourists occasionally, have signs in English. 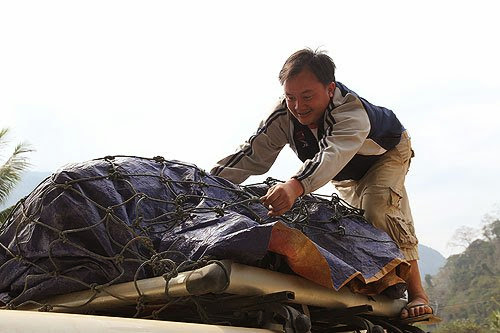 Survival Guide to Getting Around

Songthaews (converted trucks with two hard, wooden benches inside) fit anywhere from 16+ people.  Songthaews are the *cheapest* mode of travel and it’s the local way of getting around from village-to-village. However, this often involves riding in a dark and hunched space with no view. You’ll get a “wooden butt” that’s guaranteed to go numb after a while, further enhanced if the street turns into dirt roads.

Meanwhile, local mini-van buses are much more comfortable than songthaews and occasionally, offer a substitute.

My advice: If you’re traveling a long distance (3 hours or more) and you’re between a songthaew and a VIP tourist bus, the extra kip you’ll splurge for a tourist bus, buys a clearer view, a more cushioned seat and the potential to nap in your seat. 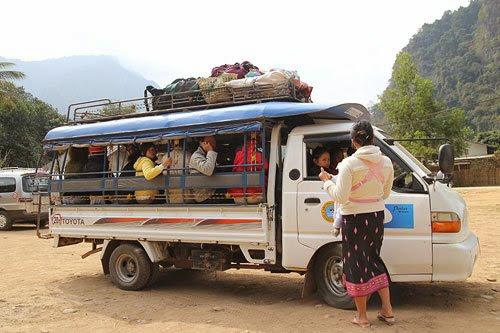 A 3+ hour ride to Luang Prabang on this songthaew? After a 3-hour ferry ride, my ass couldn’t handle any more wooden seats! A public van-bus (as shown in the picture below). I took this to the Buddha Park an hour outside of Vientiane. 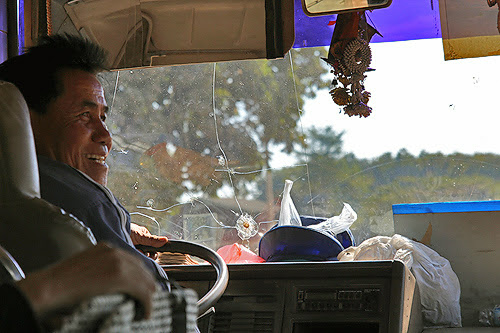 Gunshot through window.  Is Laos that dangerous? 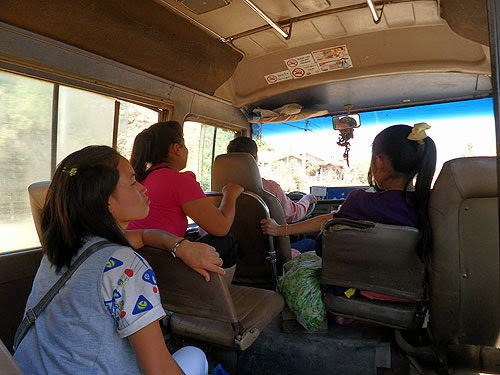 Mini vans handle long distance routes to smaller towns. Similarly, like buses and songthaews, they leave when they’re full. But unlike the Vietnamese, Laotians won’t wear out your tolerance with pulling out extra plastic stools to max-fit passengers! Seat space and comfort is decent and width runs a close second to Supershuttle.

But expect possible delays, even once you’re underway:

My trip to Nong Khaiw cost an hour at the station, waiting for a full van. When we finally got underway, the driver discovered low gas levels, but due to a city-wide blackout, we drained another 45 minutes in search for an open fuel station.

The way back to Luang Prabang was equally unique; we made an emergency stop to pick up a young Laotian couple with a sick baby. The driver drove to a doctor/pharmacist along the route, who gave the baby an IV drip, which the father held up most of the way. Never a dull moment in these vans…

Luang Prabang to Nong Khaiw it cost around $4 ; duration is 3 hours (for me, it took two extra hours due to delays). 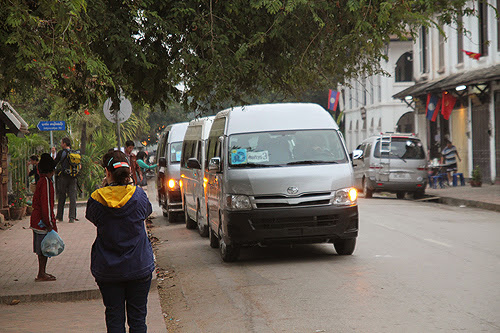 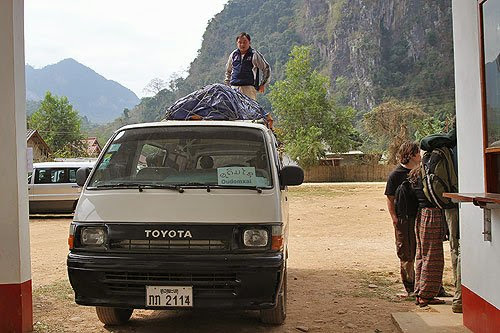 I’ve heard warnings about Laotian buses before. Most advised tolerance for bumpy rides. My cautionary advice to you… for rocky rides, just knock back a motion sickness tablet. It’s the cramped leg room and nature-esque bathroom stops that are red flags.

After an upsetting argument with a station ticket master over reservations through my guesthouse (which he was trying to swindle me out of, because buses were overbooked), I finally got a seat aboard a long distance VIP bus. They were “high-bounce seats” at the tail of the bus and it was a 14-hour bus ride (Vientiane to Luang Prabang )! I’m not sure if this is true of all VIP buses, but the seats are such that if the person in front of you reclines, your leg room is diced down to half!  I’m 5’8″ and it was uncomfortable. Fortunately, no one sat next to me, so I got to stretch my legs out to the side.

Some buses in other countries make limited bathroom stops; but the good news here, is that Laotians give you many! Only problem is… most are roadside pull-overs, with passengers scampering into a dark field to find relief.

Cost: approximately $5-$28 (depending on distance and type of bus).

– Don’t pick seats in the back of the bus.
– Bring a flashlight and tissue wipes for the “bathroom” stops.
– Keep the business card or contact number of the guesthouse/agency which booked your tickets (a receipt may not be enough). 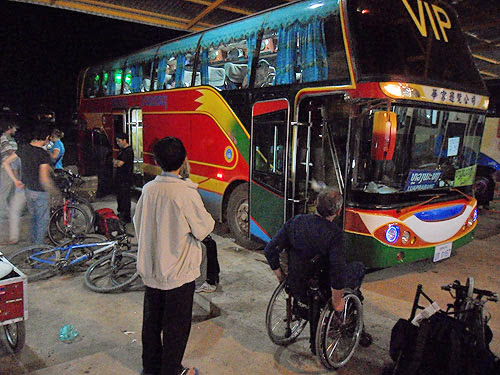 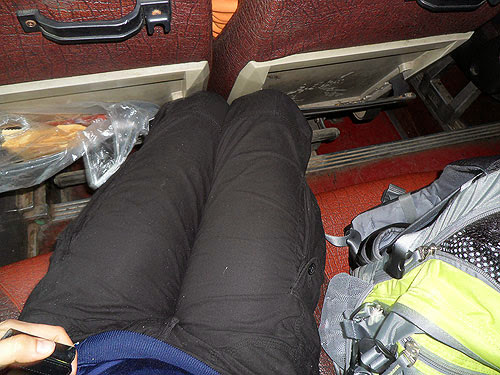 The Most Scenic Ride you Won’t Forget: Ferry boats on the Mekong!

You should take a river boat to at least one destination.

While the hard wooden seats won’t make it any easier on your butt than the songthaew, the beauty of the river life, village farms, water buffalo, fishermen and karst mountains shooting out of the water, will dazzle you. Sharing the boat with locals is adds to the flavor of the ride and it’s entertaining to see the cargo they transport. There aren’t any planned bathroom stops, but in worse case scenario, get the boatsman to stop on the side for you to go in the bushes.

Cost: ranges according to distance and whether you’re taking a public boat or private. My boat from Nong Khiaw to Muong Ngoi cost approx. $3 and took a little over an hour. 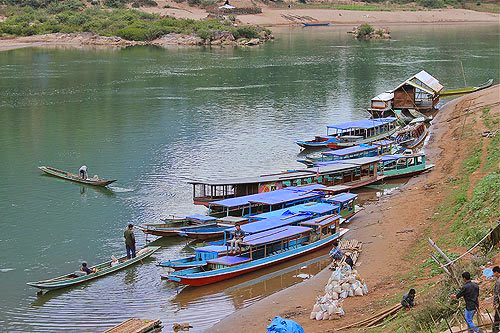 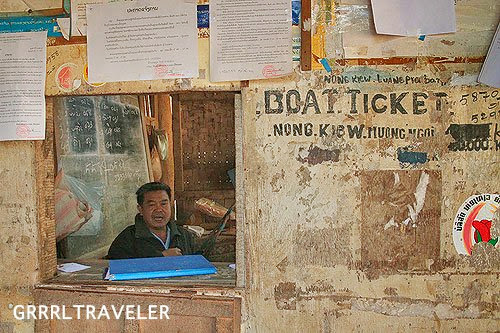 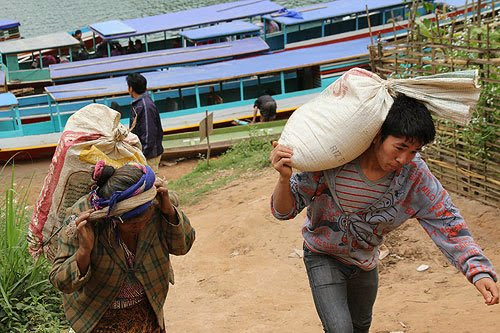 Locals arrive to their destination carrying their load.

Better than a mule: Jumbos & bicycles

Jumbos are three-wheeled tuk-tuks, serving up the cheapest and most convenient way to get around the city. Another option is renting a bicycle or motorbike. Bike rentals require a passport and can start from $6/day. 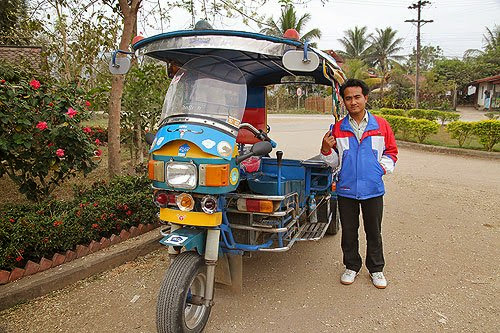 The Best Airlines to get to Laos:  Laos Airlines

Travel in or out of Laos, then check out Laos Airlines. I can’t recommend them more; they offer cheap deals on flights and even serve complimentary on-board meals and drinks! (You don’t hear of that with airlines these days) Laos Airlines offers the most basic and sweetest hospitality!

Note: I was not paid or given sponsorship to plug them in my blog.  😉 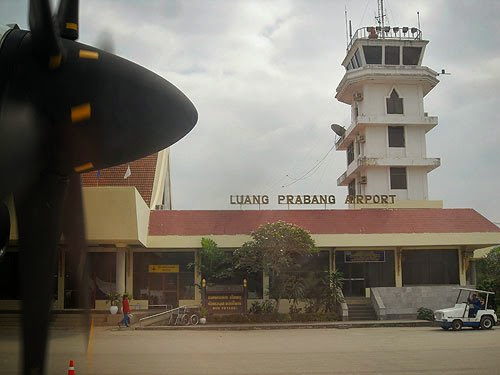 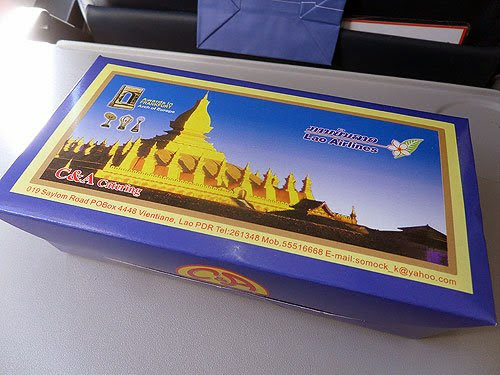 Is there anything I missed? What are some interesting ways or experiences you’ve had with getting around Laos? Indian Trains: How to Book a Foreign Tourist Quota Ticket A Complete Guide to Traveling India by Train (for Solo Travelers)