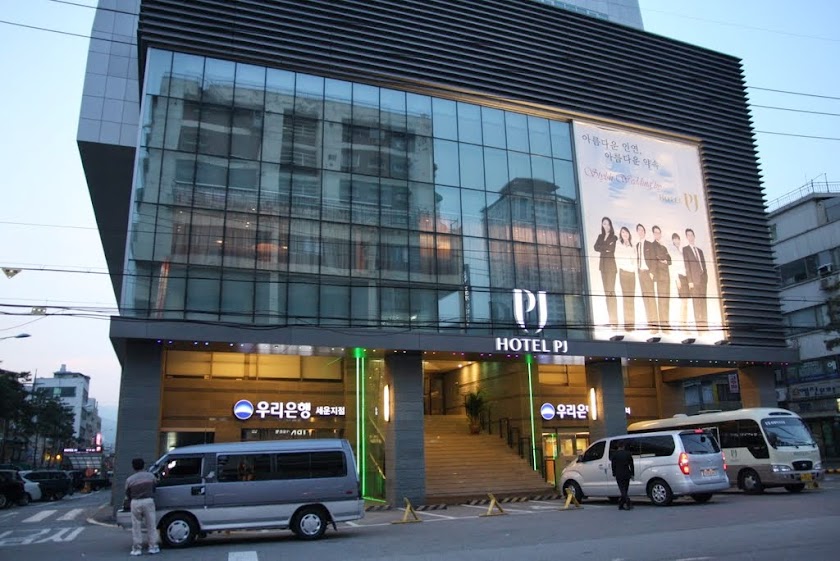 When you think of staying in an international city like Seoul, there are few hotels you think you’ll get for under $100/night and if you do, people might caution you to it being a Korean Love motel.

So when my sister found a deal on Orbitz and booked my family into a hotel, which didn’t have a website (only the Korea Google search pops it up), for 1/3 its listed website price, I had all the reason to be a little reluctant.  Worried, really. Afterall, why would it be so discounted if it were good? The good news is this– remarkable gems in cities like Seoul, doesn’t always have to come with remarkably high price tags and you don’t have to be a king in order to stay in a palace!

I cannot give this chic boutique hotel more praises for what it offered in princely palaces.  Stepping off the subway, Euljiro 3  station, the hotel is tricky to find. By the end of a 5 minute walk down a grungy side alley to get there, you might be wondering “What the hell kind of hotel did I book?”

But when you see the hotel, it shines like a blue jewel of innovative architecture and design.

The friendly bell boys waiting outside, sport well-cut suit uniforms and urban cowboy hats, which give the hotel a unique flavor of western comfort and youthful sophistication. In fact, when we arrived, they came out in the middle of the street to stop the traffic for us so we could cross!

The lobby is raised above street level– you’ll need to ascend the large stairway. What a way to make an entrance and exit!  After having performed a short Stairmaster climb, your luggage will be waiting for you at the top via a luggage conveyor belt! Yes, there was a conveyor belt to take your luggage up to the lobby. 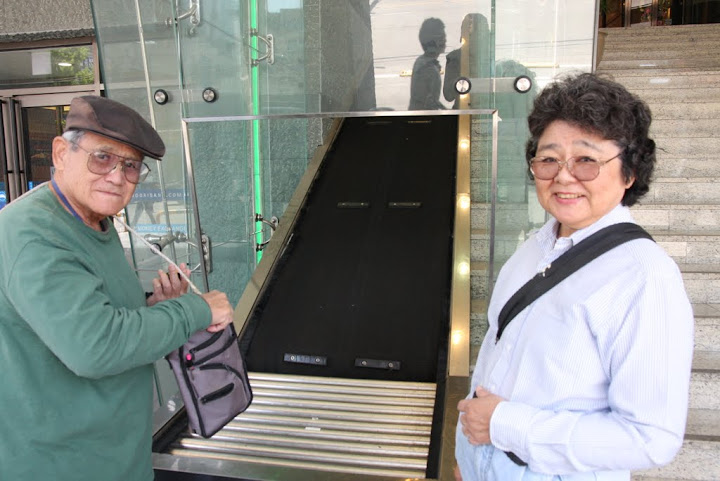 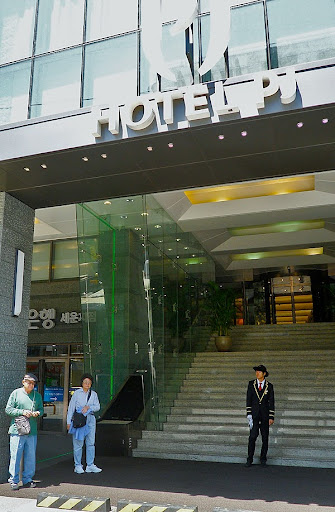 It has western conveniences and a bit of modern chic

Once inside, the lobby is tastefully simple and minimalistic. The staff there is friendly and speaks a basic English, enough to get you around town; and the hotel desk wrote in Korean for us, all the places we needed to have the cab drivers take us.

The rooms are perfectly outfitted with large screen computers and wide-screen HDTVs . If you want to conduct your work with friends,  there is a main computer lounge. 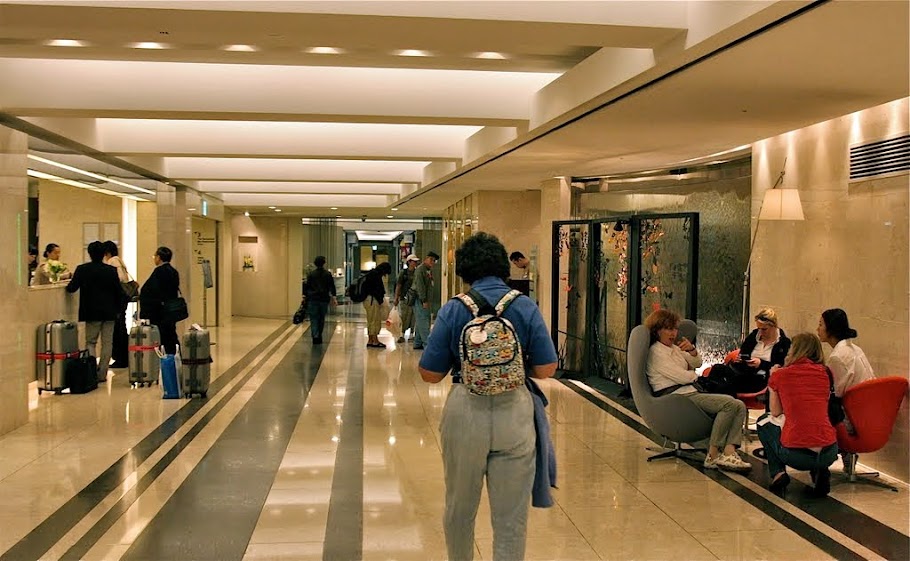 The hotel has western style bathrooms and state of the art toilet seat controls which aim to heat your cold tush or give you a little extra wash. The shower/bathtub even has a soap dispenser for soap and shampoo/conditioner (which totally makes up for the lame hotel soap and shampoo they give) 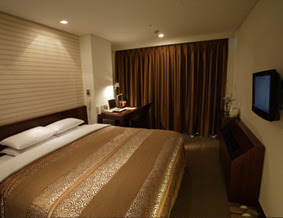 Picture of a similar room, from the PJHotel site (because I forgot to take one) 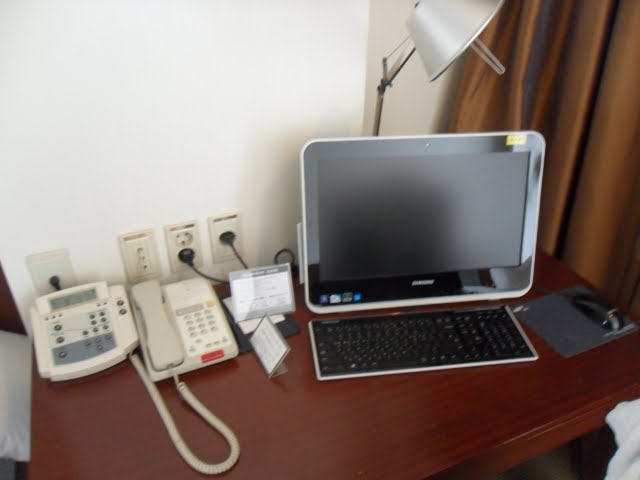 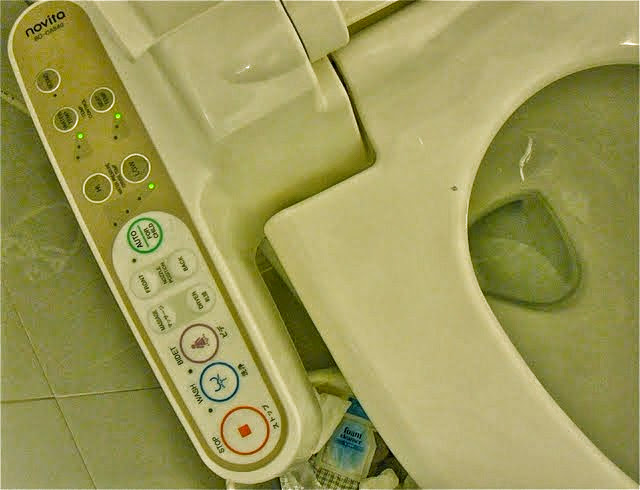 Our family took two twin rooms. By U.S. standards the rooms in this hotel can run a tad smaller. For a city like Seoul, real estate can feel limited. The rooms open to a small balcony, overlooking the crowded neighborhood of Myeongdong and Namsan Seoul Tower. It’s easy to feel like pretty rock star, the urban jungle of Seoul so close to your fingertips! 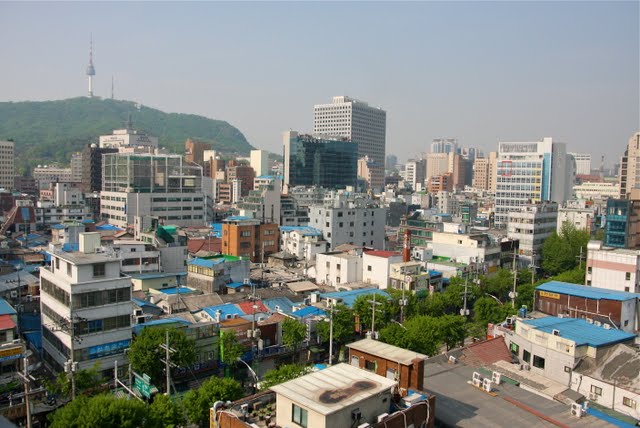 PJ Hotel offers a free shuttle bus from its hotel

It  runs a small bus route to main landmark points and Seoul station.  Airport shuttle drop-offs are within walking distance of the hotel (as are the  MTV and Nickelodeon offices  incidentally… *sigh* one of my old work spots).

But mostly, it was a great place for my family to stay

With my parents being older and my sisters in tow,  ease and convenience are really key elements.  Even though location-wise, the hotel wasn’t so easy to find and there aren’t many stores or restaurants in the area did actually pose slight problems. But the fact the staff was helpful and the rooms were classy and cool enough with modern conveniences, helped smooth over the small challenges location brought.

Unfortunately, the next hotel we stayed at in Daegu (Daegu Grand Hotel), was not only more expensive but didn’t carry as much grandeur.

Did we love spending our weekend in PJ Hotel? Hell yeah!

Would we go back again?

If I could get it at the price we got it at, I would.