The Challenges of Being a Vegetarian in Korea Having dinner with an old and dear college friend… & not knowing how to navigate my issues with non-vegetarian, mystery food. On the table: fish,  egg, silkworm larvae, snails, mystery sushi.

Updates: 1) Whether I got the Korean Crud or not, I don’t know but I did get a cold vs. a stomach virus and I think it had to do with 2) the onslaught of Yellow Dust season which i’ll be blogging soon, along with 3) the annual Cheongdo Bullfighting Festival and 4) buying a phone/plan when you don’t speak Korean.

So how hard is it for a fun-loving vegetarian travel gal to acclimate to Korea? I’ll tell you- friggin hard! …

Being a Chaeshick-chu (aka ‘Vegetarian’) in Korea

Chaeshickchu means vegetarian and I don’t want to be a whiny Chaeshickchu who complains about not being able to eat the food here. Korea does have food I can eat; my choices are just narrower and finding new veggie options to live my year by, when I have limited knowledge of the country foods, can feel rough. Well, more than rough…starving!

Korean food is often well-prepared, low on fat and a bit spicy, and it will make you lose your mood for cooking entirely, because Korean food is delicious! Many of its panchan (appetizer dishes) have generous quantities of red paste, pickled, spiced and garlic vegetables that will make your mouth squeal with joy… Food here is also cheap (sometimes cheaper than cooking). This is my vegetarian frustration as I find myself living via hunger, few veggie meal options and the knowledge that food here tastes really amazing.

Then there are the Fear Factor Korean foods (aka ‘scary mystery foods’) that you’ve never seen before, much less feel the inkling to try. Often these foods are a cultural delicacy.

My good friend Sean, a collaborative film partner from grad school lives in Seoul and after 7 years, we were finally meeting again.  I was starved- during EPIK orientation, I lived off of kimchi, rice and soups- so Sean wanted to treat me to a very good dinner (good inadvertently,  also means expensive— seriously, sometimes, I have the world’s rockin’est friends). Our dinner table had all the hidden mysteries of Korea that they don’t talk about in travel books- silkworm larvae, snails, mystery sushi,.. and me and my “hungry self” were the special guests. Help?

Technically and on very rare occasion do I allow myself seafood (mostly shellfish) and the occasional “traveler adventure food” (aka insects); just that much of an meat allowance saves me in countries like these. In a situation like this- sometimes, you have to bite the bullet, start with the least scariest option and focus on the dishes that fool people into thinking you’re eating when you’re really not! I concentrated on the fried fish and the baby snails (the silkworm larvae I had tried before and didn’t like). Next time I have a Korean friend take me to dinner, I’ll suggest pizza. 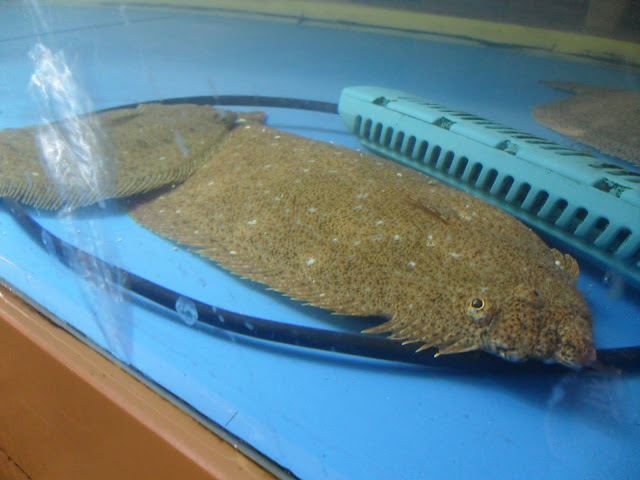 One of the mystery fishes that I later found was also part of my dinner table!
The one fish in the tank I told myself NEVER! 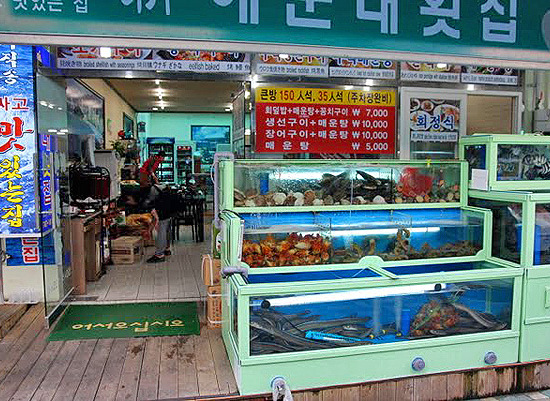 People all say that Korean food is “vegetable heavy”.

This is no myth… it IS vegetable heavy. It’s just unfortunate that most of these dishes have finely diced meat in them. Learning to say “I don’t eat meat”, “I’m Vegetarian”, “Without Meat”… isn’t enough. This only means you don’t eat RED meat.  Meanwhile, poultry, eggs, seafood, etc… are still open game to being tucked into your meal!  For instance, in my school, the cafeteria folk know that I’m vegetarian so they let me pile extra vegetables upon my tray in substitution for meat. Today, we had chicken rice soup and I declined this. The cafeteria cook saw this and confused as to why I didn’t take it, came to ask. One of the teachers had to explain that chicken was meat to me.

In general, unless you know your Korean vocabulary list of meats, you’ll find a challenge in ordering food. I’ve done everything from mimicking game show X’s to clucking like a chicken to arrive at the realization, whatever I’m doing ISN’T working! My mother – my spool of wisdom-  suggested saying “Vegetables Only“. Brilliant. I’ll try it, as at this point, I can’t think of any other phrase or charade to try. As you’ve probably guessed, vegetarian foods in Korea are pretty rare (although Seoul has a few more options).

The inability to read signs & menus

Everywhere you look, Korea is over-spilling with signage that’s lit up with enough wattage to make the Las Vegas Strip look sad.  These Koreans are serious about ad space competition, but you won’t find many signs or menus written in English. It’s written in Hangul (aka Korean characters). For the average vegetarian new to hangul- this spells ‘brain overload’.  Reading a menu takes time and there’s no guarantee you’ll even know what it means in the end.

Advice : If it doesn’t have a picture next to it, pass it by. 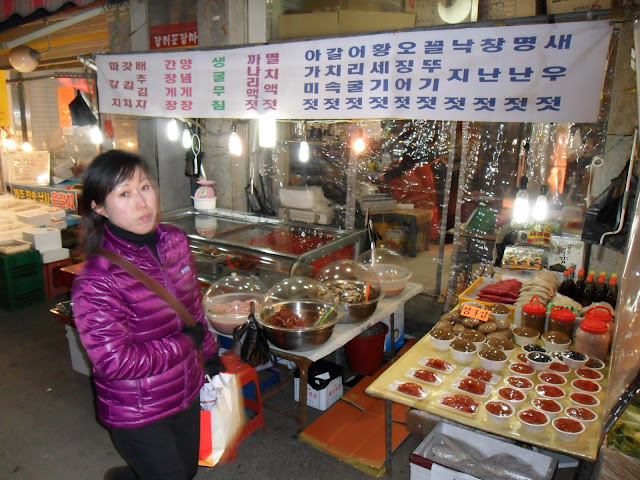 Korea (specifically, Daegu) does have restaurant chains such as Pizza Hut, Mac Donalds, Burger King, Outback Steakhouse, Bennigans, and a ton of Baskin Robbins. I’ve been stubbornly against resorting to any of these yet, but don’t think I haven’t been tempted. It’s just that many of them don’t have very good (or ‘at all’) veggie options either other than maybe, a salad.

Instead, I look to healthy fail safe foods such as yogurt, tofu, kimchi, rice, dried & salted seaweed (aka laver) and fruits.

On a good note, I found a vegetarian chain restaurant in Daegu, so I am a bit relieved.

Next article:  Being a Vegetarian (Part II): Weight-loss in Korea. 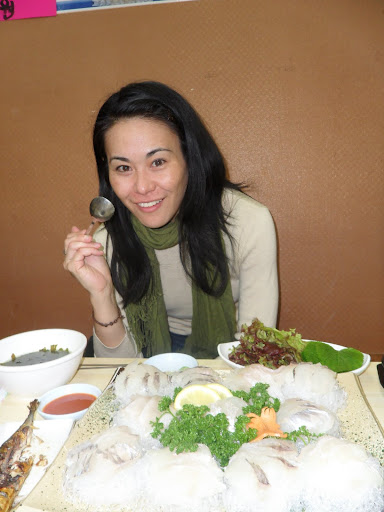