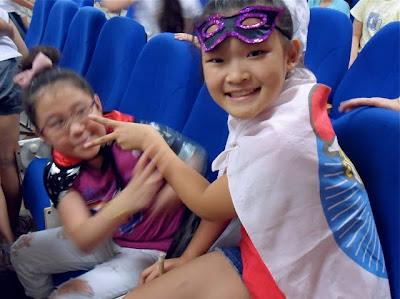 Ding! Ding! Last day at Joonang’s English Summer Camp and it has me wiped!

Perhaps I’m just pre-menopausal or in need of a better multivitamin; these past 4 days have been fun, but draining (I’m teaching two-hour long classes, remember?…).  This could also have to do with the summer heat though. It’s hot. Daegu hot…. which is close to New York City 90’s hot, but still incrementally better.  Don’t know what I would do without classroom AC! 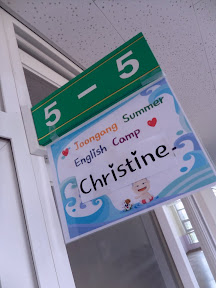 Today we NETs discovered the nicknames the students have for us, but its far from surprising. Just a little funny.

Nhim is Sandwich teacher, I’m Superhero teacher, Kyle is Golden Hair Boy & we don’t know what Chris is but it either has to do with what he’s taught or how he looks!

A part of me thinks that they probably don’t even know our names, especially as this school is mentioning my last name too.  But if I’ve to be called anything, I guess Superhero teacher is better than Monster teacher (the other half of my lesson)! 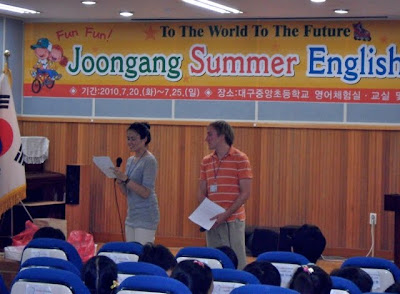 Fellow NET and veteran expat- Kyle- and I were MC’s for Golden Bell.

What is Golden Bell for Korean schools?

In Korean schools, Golden Bell is like a quiz game played on a larger scale; the entire student body plays. This demands some proficiency in English to get through, as the game is composed of riddles and trivia, spoken in English. Students are split into two groups– 3rd & 4th and 5th & 6th graders.

Everyone gets a white board paper, a dry erase marker and eraser.

The MC calls out a question and the students write their answer on their paper. When it’s time, the students raise their papers and if they are correct, they get to stay (if not, they leave… strangely, my mom- a retired school teacher- suggested a game like this for one of my classes a few weeks back). The game goes until there is a winner. 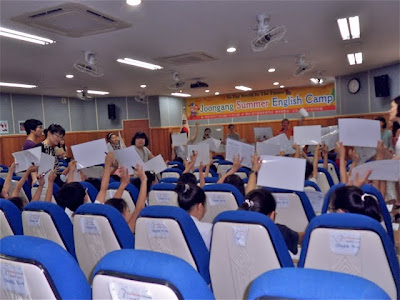 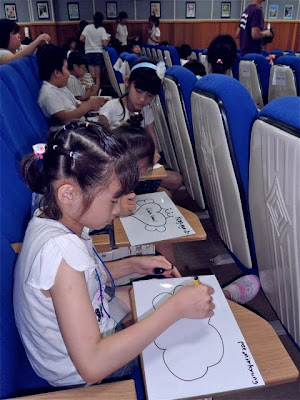 Some students like to decorate their boards and make them cute. 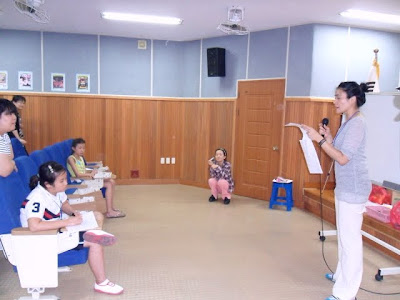 Down to the last two contestants for 5th & 6th… this girl in front of
me was so nervous, I thought she was gonna be sick! 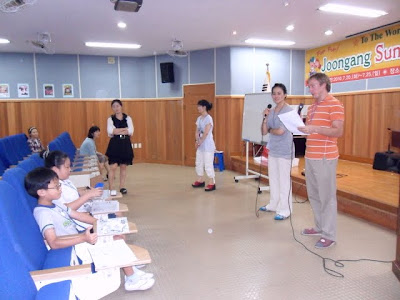 Kyle is down to his last two 3rd & 4th graders.

Here’s some of the fun riddles for my group and just so you know, my 5th & 6th graders didn’t make it past my first 6 questions. But you might be able to guess why…

5. Guess What?
I am in a city.
Many people use me when they cross the street.
I am here because a city has too many traffic.
There are many stores in me.
I am a road underground.
Answer: Subway
(** this killed off a good chunk of kids, but keep reading…)

15. We sailed out without a navigational chart.
We voyaged to the ocean without a destination.
We left our homeland not for fun but for the freedom.
We are unwelcomed guests to any country.
We lost our country to the Communists.
Answer: boat people

16. Ten plus ten is ten or me.
Ten minus ten is still ten for me.
My material is yarn.
You need me in cold seasons.
I keep your hands warm.
Answer: glove

Country & Geography section (most questions in this section are similar to the ones you see below)
31. Which is the youngest country in the world?
A.Czech     B. East Timor     C. West Timor
Answer: B

57. What is the biggest temple in the world?
A. Chionin Temple
B. Temple of the Emerald Buddha
C. Angkor Wat
Answer: C

English Summer Camp in Korea: From the Superhero Factory

The NET and KT team: a Batman and Robin dynamic duo or rivalry?

Until now, my class has had one rehearsal and today, some of the skits have changed!

Pre-performance jitters was killing off my male superheroes, turning them into super lame human beings. Now I know why teachers need a lot of energy! But working with a KT (Korean Teacher) requires energy  and patience, as well. Our class needed to rehearse more than once the day earlier so that I could tweak their performances earlier, but having a KT as your assistant director can be like shooting an arrow, which changes directions, shooting you in the foot.

You say, “We need to rehearse today“, so the KT speaks to the class.

Next thing you know, everyone is cleaning up, you’ve got 10 minutes to spare and no one explains to you what just happened. Are you being misinterpreted, over-ridden or blatantly ignored? Dunno.

It’s one of the frustrations every NET continually struggles with in the mysteries of the NET/KET workplace.

Here is our first rehearsal (the day prior)

1. Vocal projection and clarity
2. Telling but not showing (i.e. if you’re a superhero who shoots lasers, show it!)
3. Spacing
4. Play to the audience
5. Being in character (i.e. Superheroes don’t giggle)

With no time to polish things, I could only make minor tweaks. Do you choose to correct grammar or to correct performance techniques? I chose  latter. If the acting sucks, the audience won’t watch it and it’s more liable to hinder their confidence, if they’re teased for it.  Bad grammar skills on the other hand, is something you can always work around . 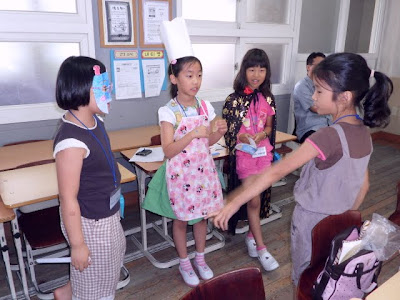 Did they listen? Yes and No. My girls tried and my boys- Ai, Calgon..! You’re probably thinking- Whoa, take it easy– they’re 3rd & 6th graders and this is only a summer camp talent show, Chris! Yeah, but have you ever been to a Summer Actor’s Camp for Kids? Kids are never too young to learn the correct way to communicate effectively and future actors can start at 3rd grade. Besides, some Korean teachers are like stage moms when it comes to class performances.  One even made a 15 minute traditional play with full costumes, script and ringside sign girl who would walk on the stage and show us what scene we were in! 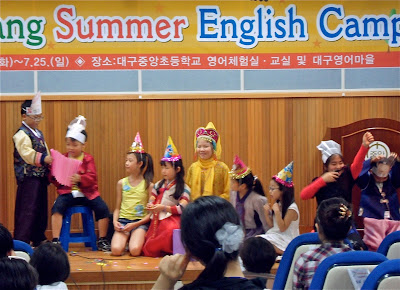 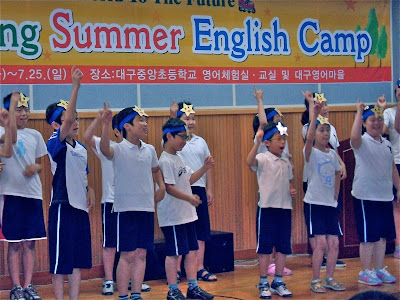 English Summer Camp in Korea: From the Superhero Factory… Showtime!

Just how did my little Korean Superheroes do in this English Summer Camp?

Well… they won 2nd place at the talent show, losing to the class whose teacher made the traditional play.  This surprised everyone, my students, even secretly, myself!

Our class didn’t wear matching outfits with white gloves or carry cheerleading pom-poms, while singing  cute songs. No. Our team skits weren’t polished or genius and stage fright immediately killed off cool shootout scenes, cool handmade masks and dying on stage. But, they were the only class whose performance was entirely self-directed (from scripts, characters and costumes), which showed work and creativity; not to mention, simply being a Superhero (and unique) in front of your Korean peers takes courage!

Until next week- signing off from the Superhero Factory! 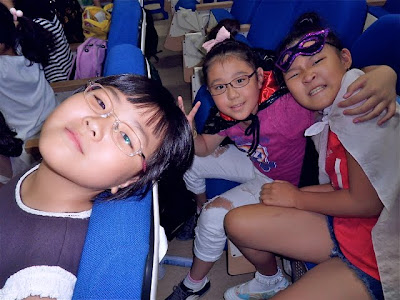 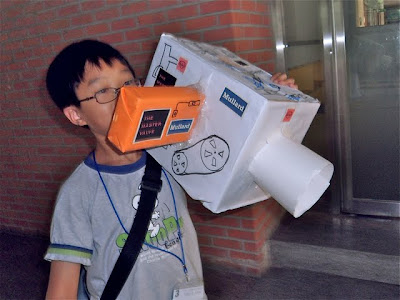 My proudest moment was teaching this little guy how to act like a real news cameraman. This is him carrying his camera as we’re rushing down (late) to the auditorium! He has the job down! 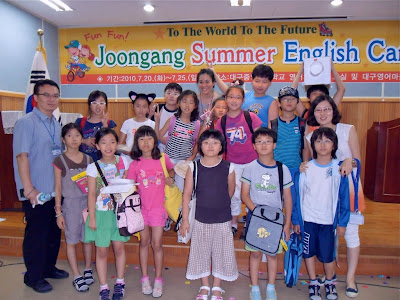 Special thanks to EPIKer Nhim who shot our performance for me

Previous Post
English Summer Camp in Korea: My Superhero Factory (Part I)
Next Post
5 Reasons to Join your Expat Community