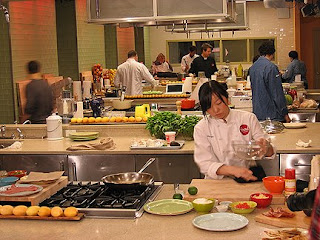 8A call time and I am over at Chelsea Marketplace at 9th Ave/16 Street to shoot a Toyota sponsored Recipe Makeover Shoot for  FoodNetwork.com. Our small crew of 3 camerapersons, AP, PA and my friend and Producer, Jim G. congregate below at one of the cafes, then head up to the Food Network Kitchens to setup lights, prep, meet our talent and shoot, as Jim calls it, “Food Porn”. The host for this show is Rob Bleifer, head executive chef at the FN Kitchens for over 8 (or was it 11?) years and a surprisingly very down-to-earth guy with a mellow Chicago feel about him. He is more than compliant in lifting his arms in scarecrow so that I can mic him up to my camera each time he does a wardrobe change.

Now I didn’t know this, but the FN Kitchens is not an actual sound stage, even though its got enough wattage and stage lights to function as one. It’s an actual fully-functional kitchen where all the FN chefs (and its celebrity chefs) come to practice, test and fine tune their recipes. Think of it like a mad scientist gastronomical lab! The kitchen has 6 work stations with a small separate room on the side for the “taste testers” who are the gastro-equivalent of “the Noses” in the perfume industry. The taste testers sample the foods that the chefs make and offer suggestions to improving the flavor of the dish. 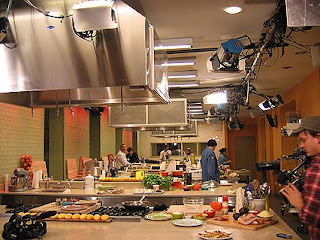 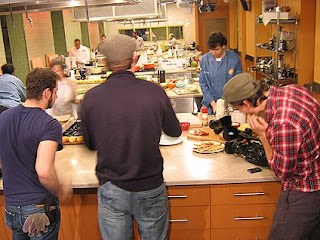 Smoke, mirrors and the people behind the food-
Most of the time, when I go out on shoots, I know i’m getting an up close working tour of what goes on behind the TV magic but there are still occasions where my backstage pass lends a surprising new understanding of alternate job industries, lifestyles and the inner mechanics of how different shows get put together. For instance- in shooting cooking shows, while the chef walks his audience through the How-To’s of a recipe, there are food preparators in the back working like busy mice, chopping, dicing, baking and creating ready-made portions of the dish so the chef can finish his recipe in the length of a show.

We shoot 3 recipe segments, have an hour lunch break and wrap in approximately 4 hours! (earlier than scheduled) Ok- so cut me a piece of that cake, Rob!