Who else can say they got a chance to walk barefoot over sacred rat pee and poop?

It’s customary to remove your shoes, when entering a temple in India and at the Karni Marta Rat Temple in Deshnok (a little outside the desert town of Bikaner), as uneasy as it was, I had no option but do so.  Karni Mata (‘mata’ aka mother) is a reincarnation of the Hindu goddess Durga, and she’s also known as the ‘Rat Goddess’. She is the overseeing deity of this temple, where you’ll witness millions of rats nest and occupy free reign. Some rats nestlein statues or the nooks of handrails, several scamper over your feet or congregate by milk bowls. They’re literally everywhere. 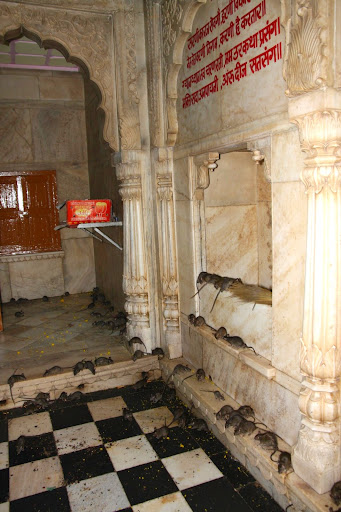 The rats are considered sacred.

Fortunately, the Indian “rat” is more like a cute “field mouse” than the giant sewer types you’ll see trolling around New York City .

But in fact, the rats that live here are cared for and do not come from the outside. Thus, they are considered clean and Karni Mata devotees take their worship seriously. Many pay homage to this temple and care for the rodents, feeding them food and sweet milk. 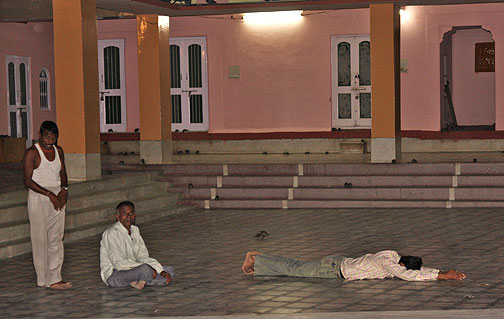 It is said if you see a white mouse, then it will bring good luck. Some of these ratshave red tikkas painted onto their forehead.

It’s nice to know that even Indians can be shocked by their own culture however.

The temple is also known to the population of Indian tourists who flock here for the spectacle. Pointing fingers, camera flashes go off, jaws agape in gasp… Mothers attempt to calm their frightened children, who give hide or cry at the sight of these scurrying rodents.

(Below) Indian tourists gawk and take photos of rats that drink from a bowl of milk. 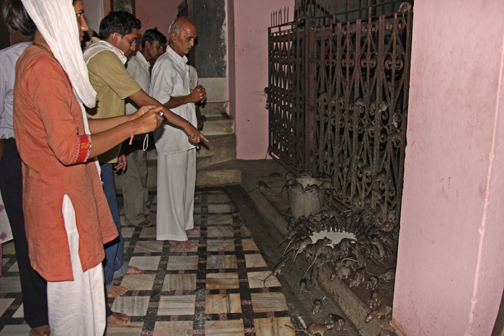 Would you walk in a temple of rats?