First of all, major shout out to GoOverseas.com who recently featured me as one of their top bloggers! They have me in the ranks of some kinda impressive bloggers so all I can say is Wow & Gomapsumnida! I’ve not had much time to promote my blog but I will do my best to keep all of you informed and hopefully, entertained! Also, I was recently interviewed by a journalist from Times of India for a past blog I wrote on Bollywood (I want to be a Bollywood Extra!) Being it was about India & Bollywood, I was pretty excited. There must be something in the air, but in any case, here’s hoping for more good stuff to come.

Monday morning, after teaching my 2nd period class, our school had a fire drill. My 4th grade co-teacher, Jee Yeong and myself (both new to teaching at this school) had no idea what the fire procedure was. No one came in to get us or notify us that a fire drill was even in effect. In all probability, a Korean fire drill could very well be to sit in the classroom and slowly burn…

Curiously, I saw an orange smoke outside my window and decided to follow the smell of sulfur.  Outside, you’d think we were a military school enacting war simulation.  Two of our science/tech assistants were walking through campus and strategically setting off orange smoke bombs. It’s as if the sound of a fire drill just isn’t enough to elicit alarm these days…

Didn’t you know that Korea had a monsoon season?

Well, now you do and I’ll tell ya- it was as much news to me as Yellow Dust & the Korean Crud was!  Yes, not only is summer upon us, so is monsoon season. What does that mean? I suppose that’s the when the rubber rain boots come out and you battle somewhere between rain and sweltering heat. So I hear… It’s still too early to say, but I’m still a little unconvinced.

Sometimes, I think Koreans exaggerate things a bit. Take for instance, the highly superstitious Korean fear of sleeping with your fan on– aka Fan Death (blogged by many fellow SK bloggers, such as Gina & Joel of One Year in Daegu …they have a fun blog on it!). The way Koreans react towards rain is another phenomenon. When it drizzles or even mists, out come the umbrellas and you’d be hard-put to find a Korean not under one. It’s like there’s a paranoia of getting wet similar to the wicked witch in The Wizard of Oz. For expats, this reaction is a bit odd. One would rather risk bearing some light drizzle  than to have to waste energy holding an umbrella for no clear reason. 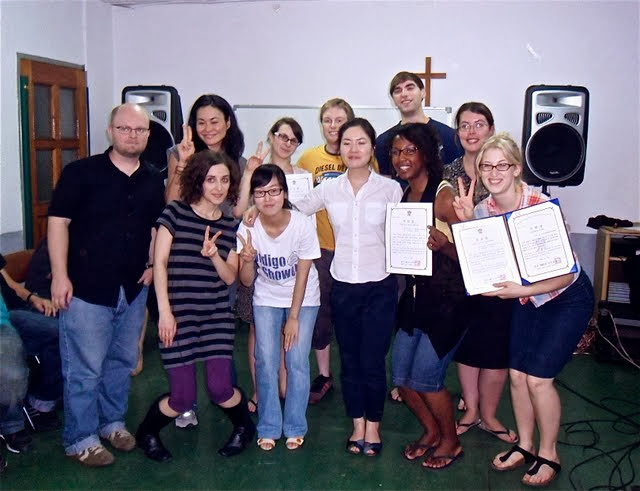 My Korean language  class at the Daegu YMCA are now over. Boo hoo- I’m going to miss that language class. It’s been my one saving grace in this lonely land.

Our graduation party was this past Tuesday and it was a party complete with pizza and refreshments, M.C., games and an honorary certificate! Hey, YMCA— pretty impressive! Not to mention, we also found out that our teachers are all volunteers! (no way!)

All in all, I got more out of it than I spent in 130,000W for that semester class; and it was nice to see my classmates, one last time as well as my  teacher Jae, who thinks I look like…

Kim, Yunjin of Lost (hmmm, dunno… to Koreans, every foreigner resembles some star that they are familiar with).

This means that now I’m back on my own.  Well, not entirely… The next semester will start next week and I’m hoping to still jump aboard!  I’ve found I’ve made some headway from my YMCA classes and it’s been ultra useful in getting me around Korea. Not to mention, I now understand my students a bit more. Yay! Before it was just me, listening to them say “Mollayo” (I don’t understand) when they didn’t understand instructions. In response, I would answer, What?, get some Korean utterance of confusion and “Mollayo” again. Stalemate.

My understanding of Korean gets us both a little farther and out of tricky situations, where they can pretend not to understand me! 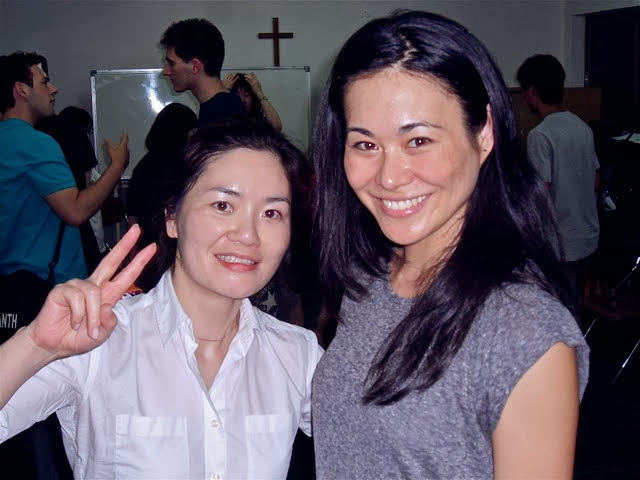 Me and my sweet teacher Jae, who taught me a lot of practical and useful stuff to get through this country!