Hong Kong is a country made up of several islands. One of Hong Kong’s must-see islands is Lantau Island, home of the Tian Tan Buddha (aka Big Buddha) and Tai-O Fishing Village.  To get there you need to take a romantic cable car ride.

As it happened, the one week I was in Hong Kong they had bad weather… a lot of rain, clouds and low visibility. Let’s just say, it gave my experiences a more romantic and mystical flavor.

At the entrance of the Nong Ping Cable Car terminal, an attendant in a green vest approached me a worthwhile all-day package deal for sightseeing the island.

I got the 360 degree Nong Ping circuit package. It included a cable car ride to Nong Ping Village, with coupons, a show at the Monkey Tale Theater, a boat excursion at the fishing village and bus transportation through the island and back to the station.  For a little extra, you can book a private cable car, a guided tour or if you’re daring, I recommend the crystal cabin car. Visibility wasn’t great that day, which deterred me from the latter.

Of the many of things to do and see on Lantau, the cable car ride was one of my favorite highlights. It was the best cable car ride I’ve been on, taking about a half hour and high over the river and mountains.

Now about the “romantic” part…

There are times as a solo traveler, you’ll find yourself amongst wooing couples, who will fill you with the inevitable urge to want to vomit in your mouth.

A word of caution…this is a romantic ride. It’s a perfect for “first date” couples. I had two dating couples in my car, who loved taking photos of themselves, nuzzling and regressing their speech to baby-talk. The rain and the thick rolling fog on this day, only enhanced the mood, lending to it a mysterious air as we rode into the fog and into the unknown.  All love syrup aside, I still recommend this ride.

A half hour later, I was at  Nong Ping Village, a constructed village of souvenir shops and restaurants. Okay, it looked a little fake. The village is a rest spot for tourists, who visit the Tian Tan Buddha and it’s a bit of a tourist trap. There’s a  Monkey Tale Theater my ticket gave me access  to, several souvenir shops, restaurants and if you spend over $150 HKD at one of the shops, you can get a wish card to add to the Bodhi Wishing Shrine.

The “wishing shrine” is said to grant the wishes written on the card. I didn’t spend anything to get a “wish card”, but I enjoyed reading the wishes of others.

The Tian Tan Buddha is a giant bronze Buddha that sits in a lotus flower atop Hong Kong’s second highest mountain peak. It was constructed in 1993 and stands 112 feet tall.  On a clear day, it is said to be seen all the way from Macau.

This day wasn’t that day.

When I arrived, the Buddha was visible. But five minutes into my climb, the fog swallowed up the humble giant, making the beacon of the “Middle Way” hard to see. Ironic.

Fortunately, I got photos beforehand and after. It’s hard to tell which I prefer…  The fog was thick, so everything had a wonderfully soft, mystical glow. At this point, I did not regret the weather one bit. Instead, it presented more ambiance. 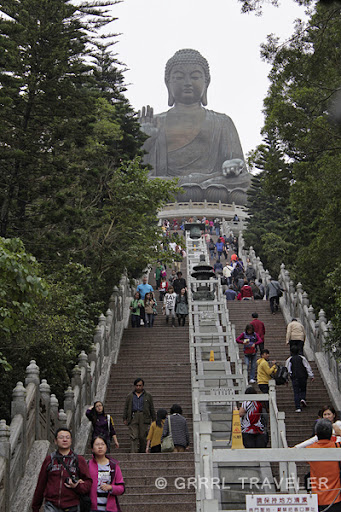 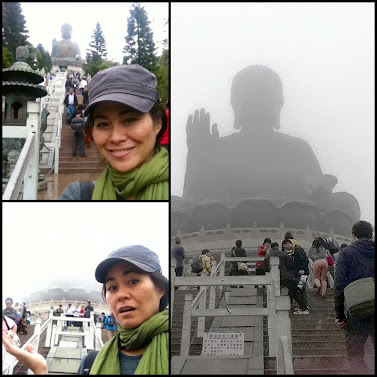 Not far from the Buddha there’s Po Lin Monastery and temple.

While I enjoy visiting temples, the main attraction of Po Lin Monaster was it’s vegetarian cafeteria. Outside the restaurant, there’s ticket booth where you buy your meal ticket.There’s also a snack shop outside the dining room. The shop sells snacks, such as noodles, fried spring rolls, dumplings, etc… The restaurant is open from 11:30 to 17:00.

A server seats you at a table and they bring out 4-5 courses (rice, soup, 2 vegetable dishes and deep fried spring rolls).

At $8 USD, it wasn’t cheap, or flavorful but it was filling. Pots and dishes big enough to be shared by two or more people arrived. For a single person like myself, it’s almost too much. The menu changes daily. The best dish was the spring rolls.

After visiting Nong Ping and the Buddha, it was time for my next excursion adventure on the island…. I was off to see Tai-O Fishing Village.

Information and Getting There:

Take the MTR from Hong Kong island, eastwards to Tung Chung station. When you exit the station, the Ngong Ping Cable Car terminal is not more than a block away, outside the pavillion.

Next up:  A walk around Lantau Island’s oldest fishing village  >>