[Video: shot from an Aiea rooftop looking out to the surrounding neighborhoods. In the very far distance is Honolulu and Pearl Harbor. Fireworks are at a mellow high on this side – not as crazy as the Kailua area.]

It’s wonderful being back in Hawaii for the Christmas and New Year holidays!

My mainland friends are like- “Oooh, you’re so lucky to be in Hawaii, when its so cold here…”  But it’s not about warm weather for me.

For me, coming home for the holidays IS mostly about ohana (‘family’) time and being able to celebrate my Mele Kalikimaka‘s and Hau’oli Makahiki Hou‘s in the unique cultural spirit which is Hawaii!

Afterall, when you’ve been raised in year-round 80 degree weather, you get kinda over it. You wish you for the opposite.

Sipping hot cocoa by a fireplace as we wear snuggly knit sweaters… doesn’t work in Hawaii, just as much as having a giant blow-up Snowman doll sitting on your front lawn.

Nevertheless, I do appreciate Hawaii’s “adaptation” of Christmas! As islanders we transform the holiday sentiments to fit our culture. 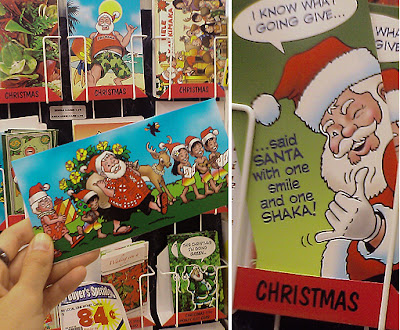 Local Kine Cards (click here to read about the makers):
Love them! It’s the best cards for local humor and culture since Pidgin to Da Max!


Obama and the ritual of the “Hawaii kid”

Last week on my way to work on a feature surf film (a mild detour from reality TV), popular local radio DJs,  Perry & Price, announced that Obama was leave the Islands after an 11 day vacation. I keep forgetting that our President has grass skirt roots and that by heart, he is a typical “Hawaii kid” who takes his family to eat shaved ice, goes body boarding in Waimanalo …and loves to spend the holidays in the Islands!

For “Hawaii kids” (a term given to natives who live in the mainland, but have existing family in the islands)- planning an annual homecoming around the holiday season is “THE Ritual”, as the holidays signal Hawaii’s biggest and most recognized family/cultural celebration.  Call it a tradition, ohana or a call back to native origin…  if you’re a “Hawaii kid” and it’s the holidays, you will pay WHATEVER the cost for a seat on a packed flight home to the islands, to be with family!

Blasting in the New Year with State-wide Fireworks

The other major draw to the islands during the holidays is this…  Every country has their major holidays and festival celebrations- i.e. Holi or Diwali (India), Chuseok (South Korea), Obon (Japan), Carnival (Brazil) or Mardi Gras (New Orleans). In the Aloha State, New Year’s Eve hits festival status, as statewide fireworks clamor throughout the islands like the 4th of July ripping on crack.

Even Obama knows- the New Year’s Eve fireworks celebration is an island-wide cultural tradition (I think that’s why he secretly stays until “after” New Year’s day)!   In Hawaii, playing fireworks on New Year’s eve is legal if you have a permit, and families can spend anywhere from $20 – $10,000+ on purchased fireworks. Crazy right? But we’re talking “island tradition”. Man, Woman and Child… every neighborhood throughout the state lights off anything from sparklers and poppers to illegal bottle rockets and arials. Kids- young and old- are seen lighting firecrackers and scampering to safe ground, while friends and families cheer and look on.

Around midnight, the fireworks are at its loudest and smokiest.  Four foot long (or longer) strings of red paper firecrackers are strung from fishing rods and lit to a loud streaming crackle during the countdown. The Hawaiian skies are lit up with dazzling arial displays and thunderous “booms & bangs” as if the state is undergoing its 3rd world war. While the noise and smoke may be bothersome to some, Its not difficult to realize New Year’s Eve in Hawaii is an ULTRA special time to its locals. Its crazy and brilliant but mostly, it unites the cultural heart of the islands through family, friends and the Aloha spirit. There’s nowhere else quite like it.

The best place to watch fireworks in Hawaii:

Kailua (it really goes off & Obama is there), Honolulu (runs a close second) or spots which overlook the island (but face Kailua & Honolulu).

Where to find Local Kine Cards: