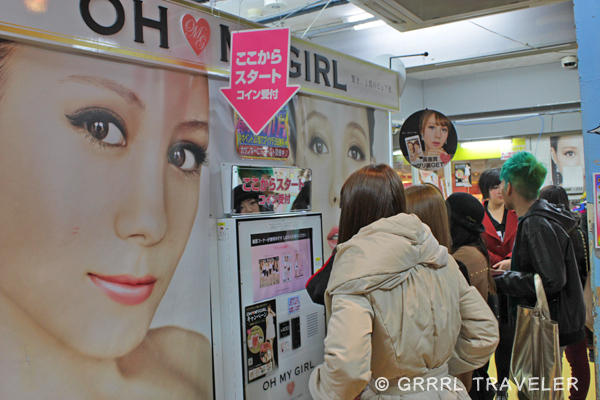 Ever wondered what you’d look like with anime baby doll eyes or if you had airbrushed and flawless cover girl skin?

The Mystique of Photo Makeover Booths in Asia

When I was living in Korea, I’d pass by joints crammed with photo booths, filled with young girls in their teens to twenties.  I couldn’t understand the attraction to those booths.

There had to be more to it than just girlfriends wanting friendship photos and couples wanting date night souvenirs. The crowds it drew made it seem like a carnival show, equivalent to popularity of fortune telling shops.   Why were so many women drawn to them? 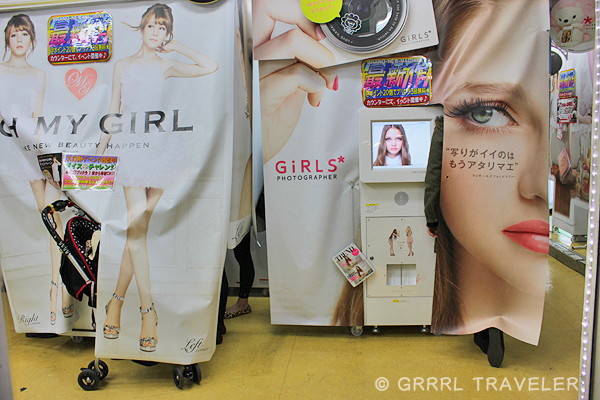 (photo above) I personally, like the baby carriage popping out of the booth. 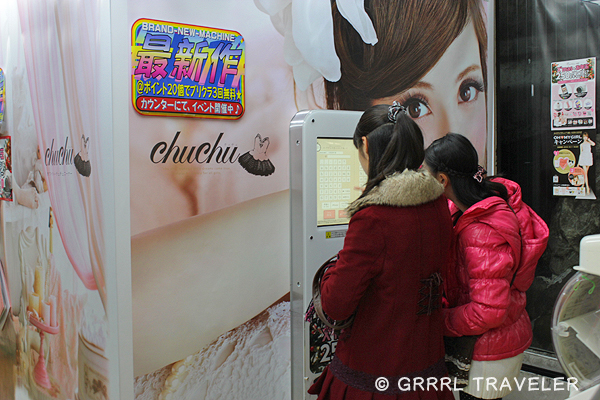 When I was in Tokyo, I met up with my girlfriend Yuko. We went to the hip and carnival-like district of Harajuku and she took me into one of them.

“Wanna try it? It’s very popular with the younger generation. You can take photos and manipulate them or draw on them, ” Yuko said to me. 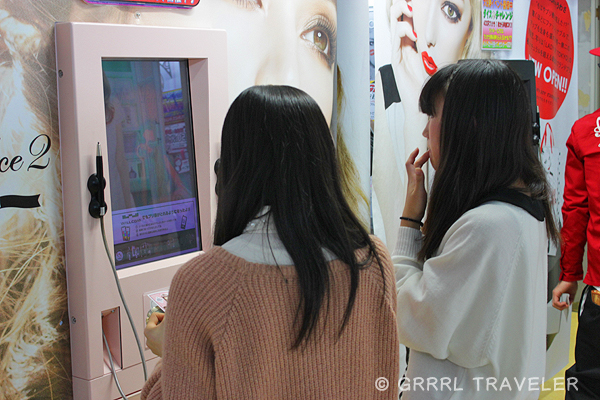 Honestly, the mystery of those Asian photo booths were building for some time.

Being solo, I tend to cast off activities that are for groups and couples. Afterall, it’s not like I can just charge in, take photos amidst gaping stares and tell myself I’m doing this for passport photos. There’s just some things which are more fun to do with others than by yourself.

So with excitement, I nodded agreement to Yuko’s proposal and we went into a shop filled with a cornucopia of booths. Girls skipped from stall to stall, disappearing behind curtains. Others weaving through the halls cooing and giggling with girlish delight. 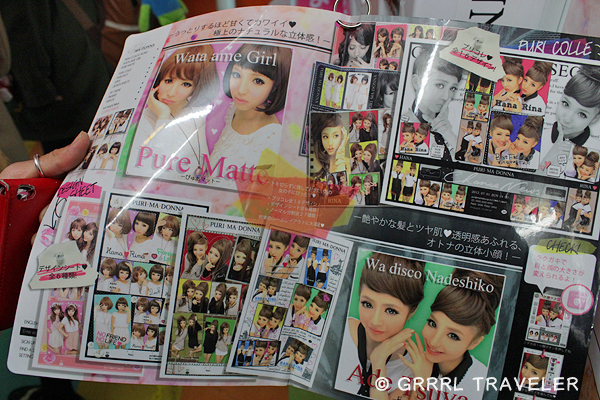 The end result of photo beauty makeover was predominantly the same… an airbrushed version of yourself.

I don’t know what it’s called in Japan, but in Korea, there’s a name for this particular style of look. It’s called “Ulzzang” or best face.  Being a subculture style similar to cosplay culture, the standout feature of Ulzzangs are the large doe-like eyes, similar to anime comic book characters. Other traits are fair skin, pointed facial features, a small nose and lips. Often this look is achieved through Photoshop or makeup, double eyelid tape, circular lenses and false lashes (read here for more).

The one we decided upon was called, Kawaii (aka “cute”) Face. A sample ad outside the booth, showed you the clear transformation that the photos would give you. In essence, they’d give your look one of a cute alien baby doll. 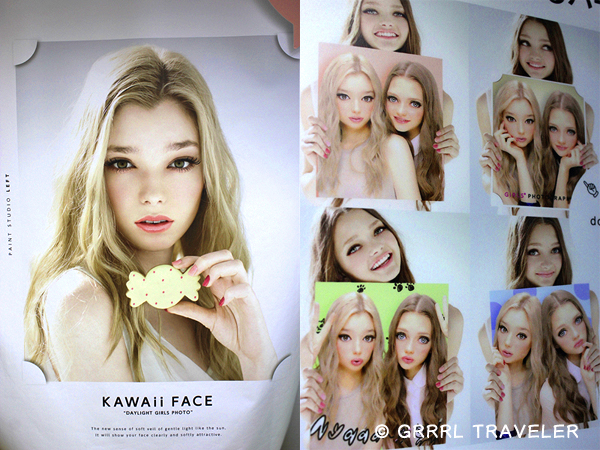 Going through a Cover girl transformation

We stepped in. The booth was large enough for a group to fit in. A touch screen monitor was in front of us. We inserted our money and started the program.

It showed us a magazine photo of two girls posing. 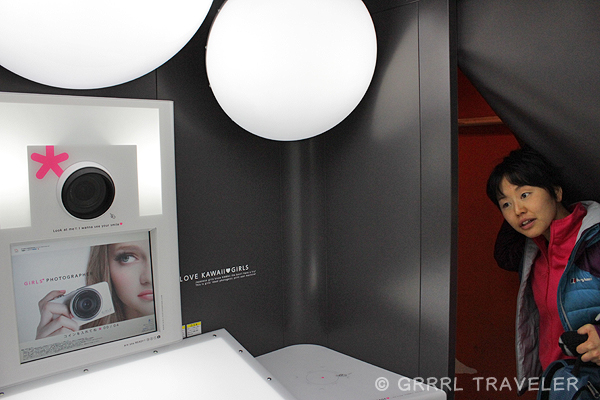 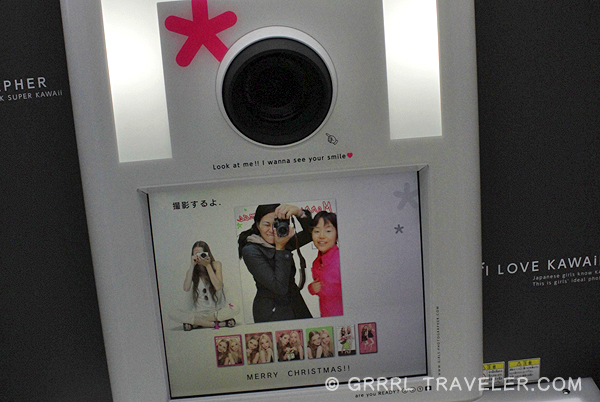 So like a faux cover girl photo shoot, that’s exactly what we did. We followed the pictures of poses in front of us.

Strike a pose… a flashbulb went off. Another pose… flash went off .

It was so much fun, that I actually didn’t want to stop.

When the ride was over, we exited the booth. Outside were two monitors side by side.
.

“Okay, here we can design our photos. If you want to draw pictures or write anything, you can do it here.

But first, we choose the look. I will do this because it’s in Japanese and we have a limited time on the computer”.

.
A drop-down menu allowed us to choose a range of styles:  eye types, fairness of skin …  Yuko knew what she was doing; she worked the touch pen scalpel very quickly. 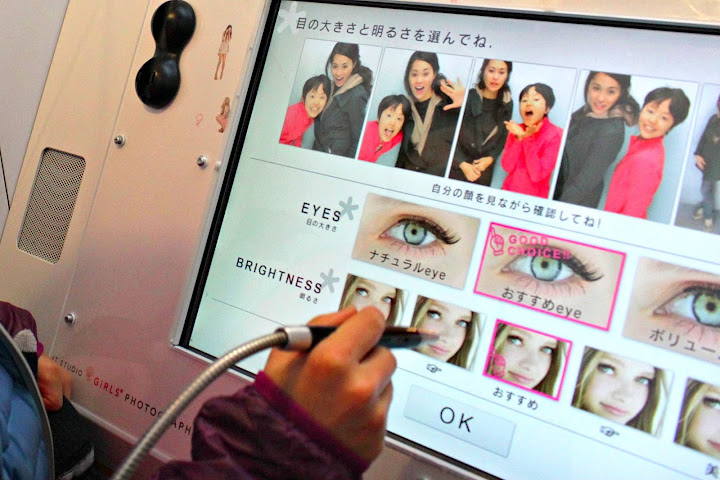 Then it was time for us to add individual touches on our photos.  Side by side, we started designing.  I was still stumbling, trying to figure out how to add or delete or what to design. It was like a timed game and a little stressful. You had to move quickly and do everything you wanted before your time expired.

When we were done, the pictures came out like magic. Voila. I can see the female attraction to these photo makeover booths.

It was like standing in front of one of those dressing room mirrors, which has a slimming effect. Whether I looked real or not, I could not take a bad picture!  (And I take a lot of bad pictures)

My God, my skin looked creamy, flawless and amazing. My eyes were a little “freaky alien”, my features looked sharper and I suddenly had makeup, where I never applied it.

Seeing how I could be instantaneously transformed was addicting.  A part of me was tempted to run back into that booth!

Was it my sense of narcissism? Vanity? …A way to see what I might look like, made-over with hyper-real plastic surgery? Or maybe it was a fascination with how I could be transformed into some fantasy ulzzang beauty?

Basically, it was all of the above…and it was wicked fun.  (To see more photos, click here) 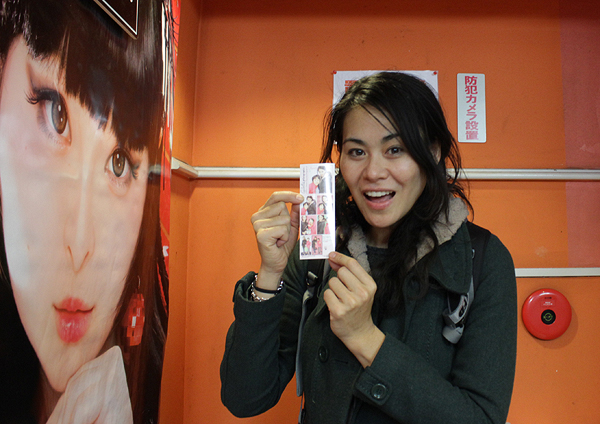 Next Up: An eye-opening step into Japan and Asian pop culture with Harajuku’s Cosplay fashion and Idol Stores.