Bewitched by the Seonyudo Islands 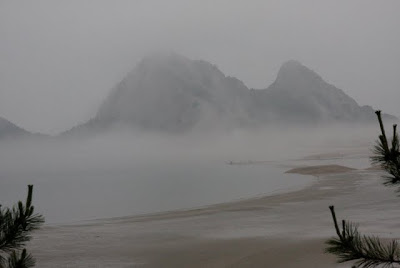 Just off of Gunsan (a port city in the Jeolla-buk region), you’ll find the Seonyudo Islands, a popular tourist spot and a cute chain of some 20 islands.   Its name means “islands so beautiful that God admires it“, and this in the summer’s morning mist at first glance, seems like it would be true.

After our first successful night at a Korean Love Motel in Gunsan, we were well-rested and off. Some confusion as to where we would find the correct bus stop to the ferry led us to a kind Korean lady, convinced we were heading in the same direction she was. In essence, we ended up taking the 1 hour “scenic route” to a ferry terminal, which turned out to be the wrong ferry terminal. Didn’t stop us though, and we ended up getting to the correct terminal to catch the next ferry. 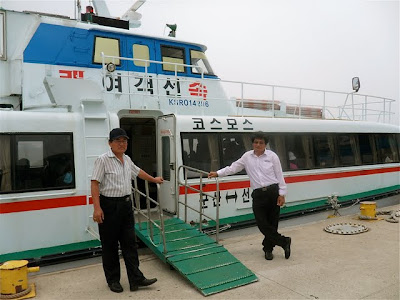 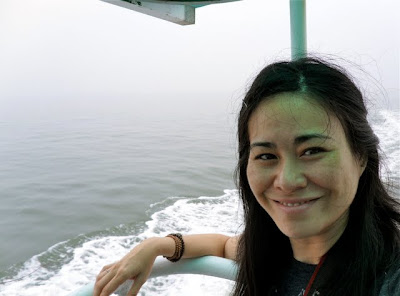 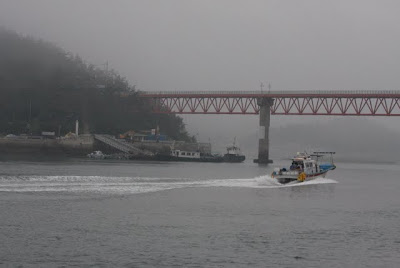 Table of Contents: Bewitched by the Seonyudo Islands

Arriving in the Seonyudo Islands

We hopped aboard the Gunsan Ferry and arrived in the Seonyudo Islands mid morning to witness the islands’ moody, tranquil and mystical aura. The main island of Jin-ri houses the main accommodations and provisions: the ferry port, transportation options and rentals (bike, sand dune, motorbike, group taxi, etc…), one small grocery store, some minbak guesthouses and a throng of local seafood restaurants.

The Seonyudo Islands are a chain of four main islands — Jinrido, Munyeodo, Jangjado and Daejangdo. The islands forge bike-able bridge paths connecting to each other and make exploration fun and easy.

It felt like we arrived during Seonyudo’s off peak season

Today, there’s a haunting beauty to the Seonyudo Islands as it’s veiled in morning sea mist… like seeing a pirate ghost ship looming on the horizon with grandeur and intimidation. In an instant, it’s enveloped in fog.  Viewing things in the mist, things appear bewitching and illusive. In the distance, charming fishing villages appeared like colorful and lively Swiss chalets dotting the landscape. Up close, were abandoned beach houses of fishing ghost villages.

Each island had a fishing village that turned out to be deserted or seemingly abandoned. Fishing ships during seasonal low tide, sat on the sand or in the mud like beached whales; while fishing nets left hanging, occasionally held dead sea carcasses. Was this a movie location facade or a romantic haven for dead sea life! 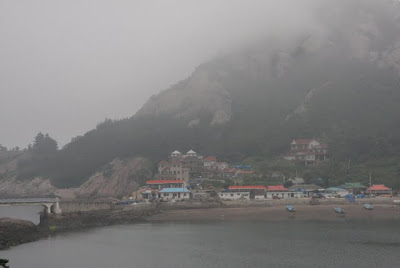 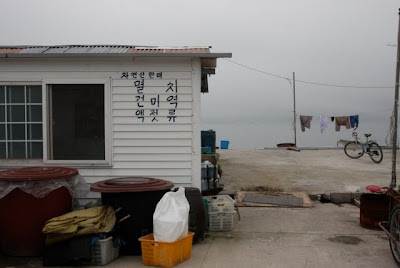 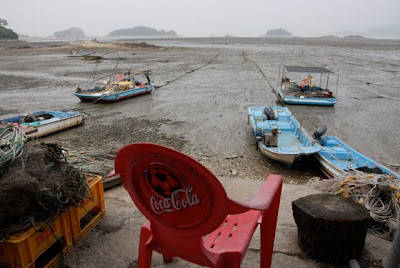 The beauty of the quiet Seonyudo

There is a lot of unique charm and beauty to these islands and its seclusion. The crab-like shells of its local inhabitants, occasionally shows more and you may get to witness it. I was excited to discover a fisherman net-making school.

Moss green rocks, an ajumma farming for sea snails, a cove that looks like it’s straight out of Pirates of the Carribean or Peter Pan and the ability to bike across a bridge over into another island, while approaching it from the angle of a helicopter tour! The islands were a perfect weekend holiday of leisure biking and sightseeing, if only just to inspire one’s curiousity!

Where to Stay on Seonyudo

It seemed that the island might still be preparing for the summer resort season to hit. Minbak (guesthouse) accommodations were thin and from the look of some of them, didn’t seem tempting during the season we visited it (late July), so we ended up rushing to catch the last ferry at 4:30P to squeeze in another city as a Sunday day trip.

However, if minbaks don’t suit you or you’re low on budget, you can pitch your tent on the beach or on a romantic sea cliff overlooking another island, where you can wake up and inhale a deep “Ahhh…” (though be aware– this is a romantic notion, until you see the type of ocean centipede-like roaches you see all around the island… dont’ say I didn’t warn you)

While I’d like to say I was a patron to the restaurants in support of the fishing villages there, I still haven’t found comfort and ease in ordering Korean food I don’t know. Thus, provisions seemed spare and cups of instant ramen was our lunch. 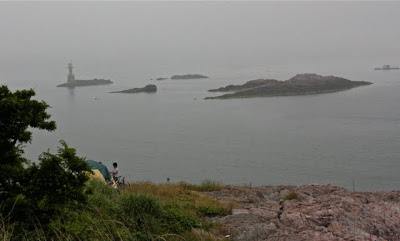 some visitors pitch a tent 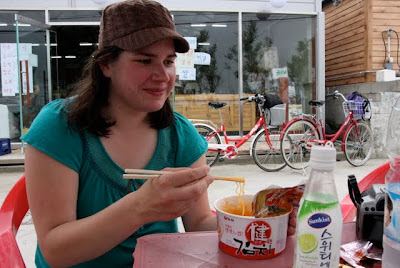 Margaret enjoys her bowl of ram

The islands are best traveled by bicycle, sand bikes, motorbike or you can hire one of the island taxis to get you around. I rented my bike for 10,000W for a 24hr period. No locks or chains necessary as the bikes are tagged and there’s a general feeling of Korean trust; though some of us, may need to learn how to use the kickstand properly (half the day, I was chained to my bike) 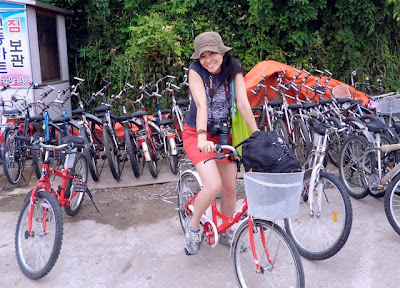 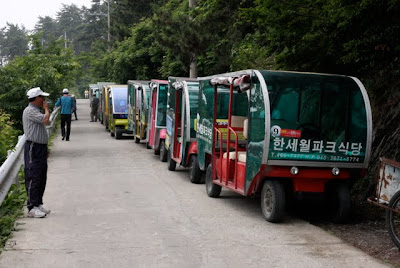 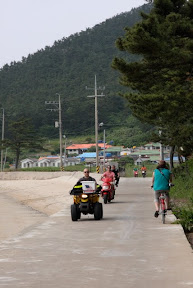 Getting to Seonyudo Islands from Gunsan

* From Gunsan Train Station or Gunsan Terminal take a number 7 bus and get off at Gunsan Ferry Terminal. The bus departs frequently (06:20-22:46) 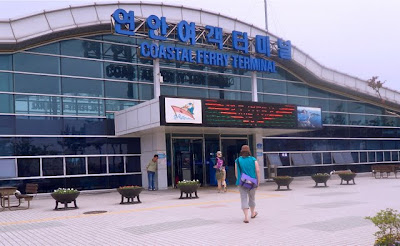 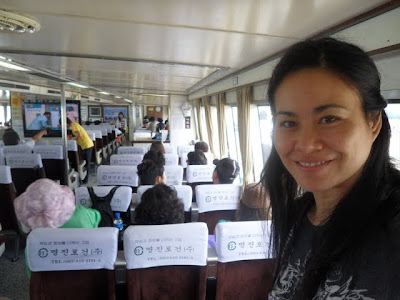