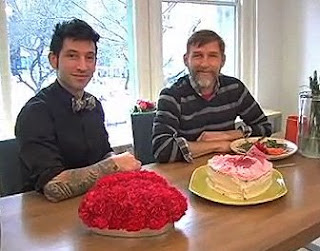 Today is a bit of juggle- I have 2 shoots back-to-back with different clients. Both are advocating either vegan or vegetarian lifestyles! First, is a DBTV shoot in downtown Manhattan for a Valentine Day Special with our host, Josh interviewing and doing crafts with designer-photographer & host of “House of Style”, Todd Oldham. Then I will cross town to Williamsburg, Brooklyn to shoot a photoshoot for a vegan shoe designer. There’s nothing more invigorating or ideal to me than working amongst creative people! Today promises to be a colorful day – i’m excited.

9:20A- All hails to the cab! When I arrive at DV Depot, I find there’s a holdup with our equipment.  Hrmph! I let them know that my cabbie is waiting for me downstairs and that my he will be upset. 10 minutes pass and he IS- he’s on a one-way street, there’s no parking and he is afraid of receiving a $150 fine.

10:45A- Arrive at Todd Oldham Studios and meet Jodi, our stylist and host/director, Josh outside! Whew! We walk through the doors and are immediately greeted by Ann, Todd’s very smart, cute and very photogenic Jack Russell terrier! Everyone and the staff is friendly in accomodating us in our shoot. Music is playing in the background and EVERYTHING from the floor patterns, cool ceiling and light designs, high school cafeteria lunch table, hanging artwork and  enviable library of art books ranging from 50’s illustrated cookbooks to photography, architecture and DIY crafts, etc… all practically cheers I INSPIRE- CREATE ME!!! Todd has designed the inside of his studio to visually and mentally stimulate creativity and its working… 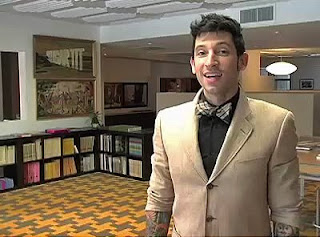 The studio room we shoot in, its pretty well lit but we’ve already rented a light kit, so I throw them up anyways, convinced that we will make the added expense work its while.  It’s a 2-camera shoot with one person operating everything… Me.  So, I frame up the shot for my phantom shooter and throw him on sticks so that my camera can roam. Unfortunately, later I realize I forgot to match eye levels on both cameras, but what can you do?  This was my first 1 camera operator-2 camera shoot before and for such a small production for what will be a short 15 min internet video for Josh’s vegan fashion blogsite, one has to make with little means.

We meet Todd – not only is he courteous and soft spoken, but the man has secretly found the fountain of youth (even if it is hidden behind the beard he’s currently sporting). He is glad to be a part of this project. He and Josh settle into their seats with their craft materials ready at bay and LIGHTS CAMERA ACTION! 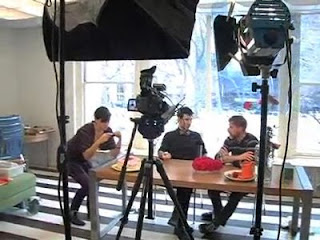 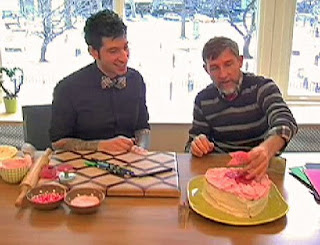 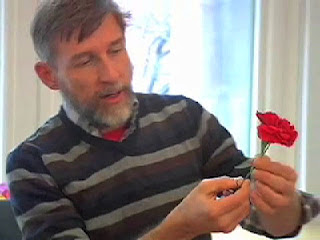 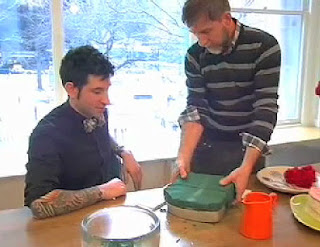 After we wrap, Todd invites us to stay for lunch and orders sandwiches from a nearby favorite of his, Craftwitch. He, us and the entire office staff gather together to have lunch on the office’s high school cafeteria lunch table. Todd is a genuinely a sweet and down-to-earth guy (and he’s sitting right across of me! There are few celebrities that hit my haa-ah-hallowed note and Todd would be one of them). Personally, I didn’t realize that since the 90’s, he’s turned from the high fashion circuit and worn so many Renaissance hats. He’s had his own DIY craft show “Handmade Modern“, is an amazing photographer with published books and an interior designer. And though he was the IT boy in fashion, he’s taken his designs to fit for the average man’s pocket by designing for the likes of Old Navy, Target and La-Z-Boy. A creative genius all the way – this man’s got talent and heart (& it aint just carnations or vegan icing!) 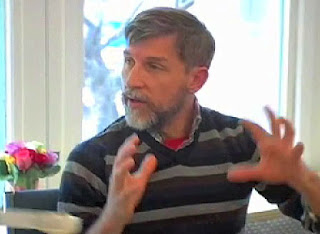 3P- I cab over to Brooklyn for my next shoot with Elizabeth, a designer of olsen Haus vegan shoes. Her photoshoot is for a look-book and she needs some documentation and interview-like commentary. I shoot it in the style of reality TV for the specific audience she must target it with- the footage will be edited down to a reel that she must send to a major network show that wants her to be a guest judge panelist on one of their design shows. Elizabeth’s creative integrity and passion is pure vegan- she has chosen all vegan models to sport her shoes which have a chic, urban-punk flavor. We start off with a baby girl toddler who, interestingly, is trained into being behaved via the music videos on her mother’s iPhone! Toddlers can be difficult talent to shoot or to keep still  but with that musical iPhone dangled over her head like an apple, the hypnotized toddler was almost as well-behaved as well,…Oldham’s dog! By around 5P, light began to fall and the shoot was wrapped.