… There must be a mistake, I thought.

I was at the front desk of Emotion Hotel (aka the trekking central for tour groups) enquiring why I’d have to spend  another night in my hotel. This didn’t sound right. I knew I signed up for a more intensive 3-day trek and one in which two days were  spent at a homestay in the mountains. I just trekked Cat-Cat Village, disappointed it was a stroll than a trek.

While I was enjoying Sapa, I was eager to get some exercise and experience the fresh valleys of Sapa and village life.

Sapa has a lot of trekking tours

With all the trekking groups consisting of friends and couples, I didn’t want to think I was being forgotten because I was a solo traveler. Afterall with all the noise and activity, solo travelers can appear to be invisible.

From Hanoi, it happened twice on the train to Sapa and at the Lao Cai train station and it was happening now.  I was single and  a floating casualty of solitude.  After ten minutes of sorting things with the trekking coordinator, I was assigned to a trekking group . Now, my new group was waiting on me to begin their journey. I was in a scramble.  Shoving my power cords and my newly laundered clothes from the hotel into my pack with no attempt to organize things, I flew through a mental checklist:  ...power cords, toothbrush, passport…  money…(gasp)  Money!

I hate last-minute scrambles. Panicked, I dumped the entire contents of my pack onto the hotel lobby floor!  It was at the very bottom of my pack. 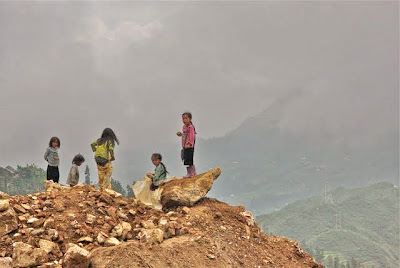 Taking a guided Sapa trekking tour of vs doing it independently

Some people like to trek Sapa on their own or even motorbike through the valley. It’s possible.

My trekking tour cost roughly $107 USD for five days/four nights, with reliable transportation throughout from Hanoi to Sapa and back. It included very nice hotel accommodations and this was my second trek with an English-speaking guide. I also had enough free time for sightseeing Sapa town on my own. If you ask me, it was cheaper to take the tour!

The trekking part of Sapa Valley starts a little ways outside of town.  Like Cat Cat Village, you must pay an entrance fee at the booth and for that you need to have acquired a permit you got in town.  No permit, no entrance.

Traveling Sapa can feel like a trekkers’ Disneyland.  Don’t expect to be the only one there. There’s a trekking tour in front of you and behind you and somehow, each group is equally spaced apart.  It’s still a worthwhile trek, offering a bit of a challenge and the mountains are the unforgettable Vietnamese version of the alps in the Sound of Music.

Kuh is sixteen and is one of the youngest ‘legal’ Hmong tour guides in Sapa.

My intimate trekking group consisted of a French couple and Kuh, a guide from the Black Hmong tribal group… and her entourage of an aunt, her mom and relatives.

At about four feet tall, Kuh was sixteen years old. She had a fluid command of English and this was her first summer job.  Having learned English from tourists and at school,  she was now, three months into summer and already her family’s major breadwinner.  This isn’t unnatural for girls in her tribe, though. Hmong girls can start working and selling crafts from the early age of five years old!

But we were off, walking outside the town limits.  We made a bathroom stop (at a sketchy rest stop) just before entering the valley. Once we entered, there’d be no bathroom.

Kuh is sixteen years old, but doesn’t feel she’s ready to marry yet. Not like her friends anyways. She’s more independent than others and wants to continue working. Working as a guide is a lucrative career for her and her family.  It affords her schooling and her family’s well-being.

In Hmong culture, fourteen years old is the ripe age to get married, though and girls can start as early as ten years old. By the age of twenty, many have already established family of at least two children.  For some, the marriage is by choice; for others, marriage is arranged by family.

If you’re still single by the age of twenty years old, you’re a spinster!

Kuh explained that she once had a boyfriend. They were both the same age and really liked each other. But a year ago, his family arranged his marriage to a girl, three years his senior (nineteen-years-old). He had no choice but concede to his family’s wishes, despite being unhappy with this arrangement.

He and his wife just had a baby this past spring.

What can you say to a sixteen-year old with that kind of love story?… 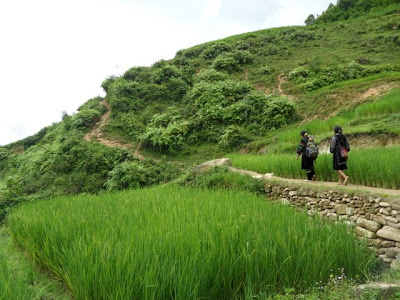 Prepared to get dirty trekking Sapa

The day was hot and some of the land was still wet from the rains. Making our way out-of-town, we were gathering a small entourage of Hmong along the way. Engrossed in my conversation with Kuh, I accidentally leaped directly in the middle of a huge pile of fresh water buffalo poop! Nice. There went the right shoe… soiled.  This got giggles and laughter among the Hmong women.

An hour later, my left shoe joined my right one, when I accidentally stepped into a swampy patch of mud.  The mud’s suction was thick and I required help getting out.

Perhaps this wasn’t my day… 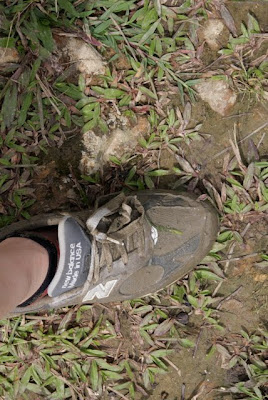 Trekking can be unregulated and a little dangerous; it’s probably a little why I love it.

The mountain terrain challenged us with steep rocky inclines, uneven slopes, slippery mud patches and uneven gravel. We even had to tackle  narrow trails on cliffs, where false footing might lead to a dangerously steep drop. There’s no guard rail for this kind of trip. You’re on your own.

I totally ate it crossing a rocky slope at one point but I wasn’t the only one. A Frenchman in our group also took a spills on the land-sliding gravel.

Bringing good hiking shoes during monsoon season is strongly advised, Kuh mentioned.  That advice however, is only for tourists.

Hmong natives have trekking down to an art. For them, it’s like a day at a shopping mall. As we were sweating and panting, Kuh and her friends were SMS texting, talking on their mobile phones, sashaying along narrow gorges, holding parasols and laughing. They did  this in footwear, that looked like plastic waffle-looking bath sandals or rubber rain boots!

It’s awe-inspiring and yet weird, when idyllic storybook clichés cross right in front of you.

Villages nestled in a quiet huddle, surrounded by terracing rice fields. Little boys riding on water buffaloes, a mother duck leads ducklings along a stream and horses grazing high in the mountains against a gorgeous backdrop of a majestic valley vista.

At some point, you think– No way, does this happen in life!  In Sapa valley, those idyllic scene are there to defy modern skepticism.’