We flew from one stall to another.  Our gastronomic Turkish guide, Ms Taciser would greet the vendors and instantly reach into the food to grab samples for us to try.  The freedom to nibble without fear of beingapproached for sales was such a relief.

Let’s get this straight, my Turkish Flavours food tour was not a photography tour of food. As much as I was rushing to keep up with video and photography, while extending a free hand to eat, this was a serious foodie’s tour of Turkish food with a packed itinerary of tasting places to stop at.   I had to pick and choose my battles between shooting with one hand or eating. Folks, go on an empty stomach.

Why take a food tour in Istanbul?

Turkish food is something I knew little about.

Knowing I was going to be in Turkey for a couple of weeks was mildly distressing as I didn’t know how accessible vegetarian food was going to be and as this was a last-minute trip, I didn’t do research beforehand.

What I discovered upon arrival was that being a coastal country, Turkish food is big on farming, livestock and seafood. Vegetarian dishes are available, but mostly only as mezze, a type appetizer.  In Istanbul, mezzes can range between four to eight Euro per dish and ordering a couple of mezzes is what you might need for a meal. Vegetarianism is not a great diet for a hungry budget traveler.  So I needed to know more.

I wanted to understand the flavors of Turkey, the cooking and food influences and to know what my food options were… if there were any!  A food or cooking tour  was one of the best way to get a well-rounded experience of a Turkish dining table.

A roadmap to Turkish Flavours

Eminonu is a good crossroads for the traditional Istanbulian plate and palate.  In the neighborhood you’ll find Istanbul landmarks such as the Spice Bazaar, its surrounding traditional market and Galata Bridge, where fishermen await tugs on their line, while seafood restaurants serve their catch down below. It is here at Eminonu that you can also catch ferry boats, across to Kadikoy,  the Asian side of Istanbul or just to tour down the river. 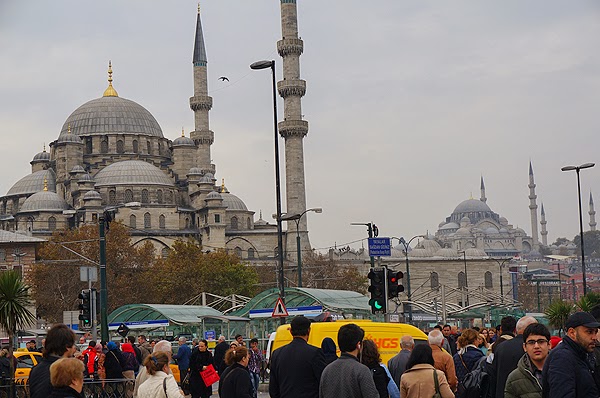 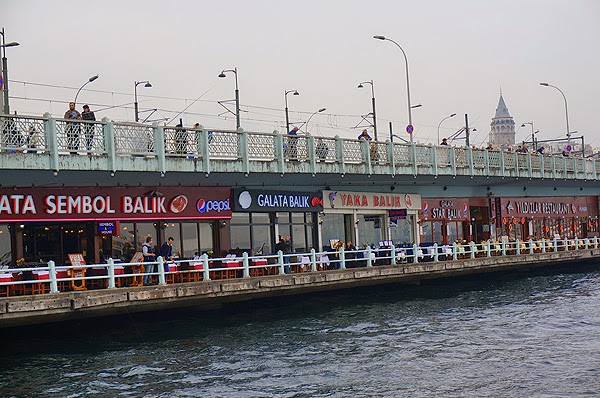 What are common to Turkish tables?

Walk down a busy street, as shops open, you’ll see what the modern day Istanbulian local is attracted to for fast-food morning breakfast….  breads with cheeses and jams.  Maybe you’ll spot a bread vendor, pushing his wagon of simit or bakery breads through neighborhood streets.  At one or two Turkish liras, it’s the equivalent of grabbing a bagel from a New York breakfast truck.

The first leg of our walking food tour took us on the outside of the Spice Bazaar to learn about food faire through the neighboring shops. We went down a row of shops, ranging from cheeses (mozzarella, goat cheese, sheep milk cheese…) to olives, dried nuts to dried fruits.  Meanwhile, Ms. Taciser’s hand dug into sacks only to sprinkle samples into ours, as she spoke about the influences these foods had in Turkish meals. 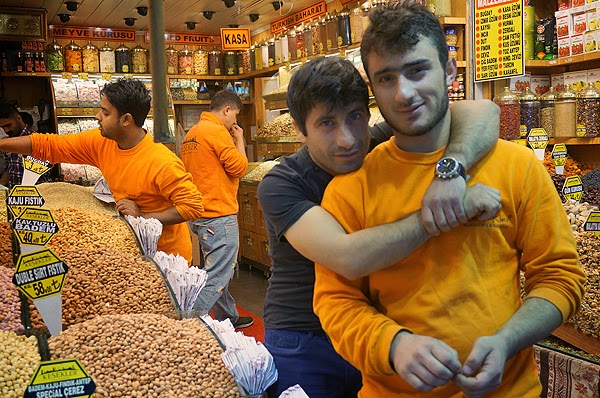 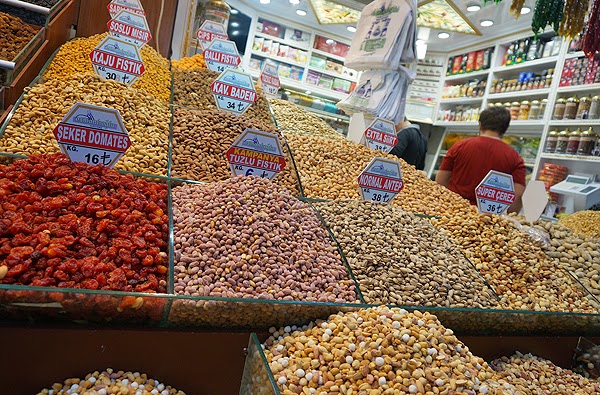 Sharing a border and a sea with Greece, many foods seem to be close relatives of the Greeks.

But as a large farming country, the Turks grow a lot of the food they eat.  You’ll notice a large assortment of dried fruits, nuts, grains and homemade preserves in markets and on tables (I found this common in the breakfast buffets at my hotels too). 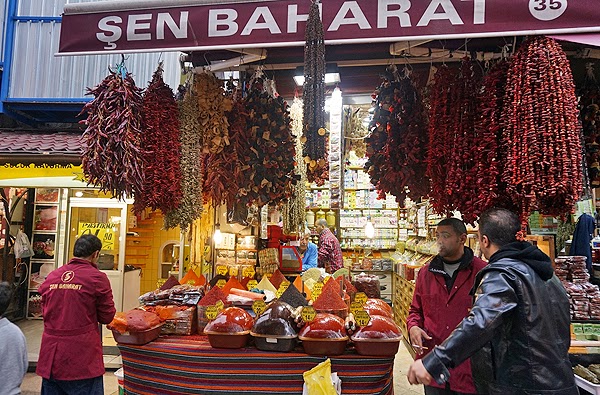 Turks have a sweet tooth. A very, very sweet-sweet tooth.  You’ll find a lot of their desserts, like Baklava (a fluffy crusted desert with nuts)  dripping in honey.  But the Turks  love creating their own jams and syrups and honey straight from the honeycomb (yes, they sell honeycombs!).  In fact, our tour even took us to a very posh honeycomb shop, which curates and sells honeycombs of varying grades and regions!

I guess that’s why I love Turkey.

Do Turks prefer coffee or tea?

Trivia: Did you know that although Turkish coffee is the country’s headline drink, it’s actually the least drunk next to tea or chai?  Bet you weren’t expecting that.

Tea is the most commonly served for hospitality and inviting relaxation.

Meanwhile, Turkish coffee is something the country famous for, due to their unique technique in brewing. The coffee is served thick, dark, a tad bitter and in a tiny espresso cup. It’s often during times of ceremonies and celebration.

A special attribute about Turkish coffee is milk and/or sugar is ordered with your coffee (not after ) so it can be brewed together.  This has to do with the fact that the sediment must have time to fall to the bottom so you don’t accidentally drink the coffee grounds.  Thus, if you want your coffee sweetened or with cream, you’d want to state that to your server, well in advance!

After you’ve drunk the coffee, you can flip it over onto you coffee plate and have the plate and the inside of your coffee cup read either by a fortune teller. Don’t have aTurkish fortune teller nearby? Friends can do the readings for each other too, by reading what images they see in the grounds. 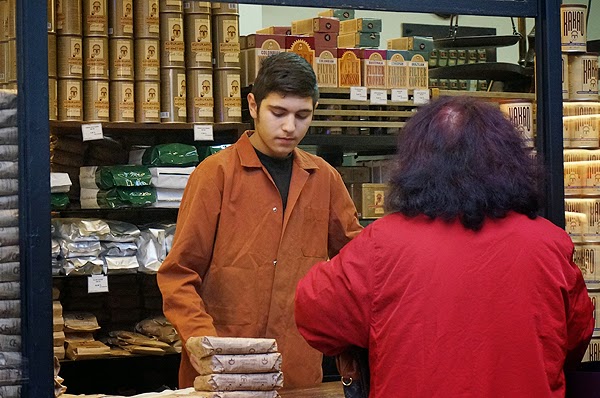 We quickly made our way to Tatakale Street, an old street, where you can find anything you’ll need in a Turkish kitchen.  Want a wooden paddle to cook your stone oven pizza?  How about a pot to brew Turkish coffee?

“It’s like pizza! “I exclaimed, after taking a bite and marveling at the familiarity of its thin crust and toppings.

“No, it’s flatbread”, I was suddenly corrected by the baker.

“No, it’s pide. It’s like flatbread,” he responded, seriously as if I wasn’t “getting it”.

Okay, okay…  I was not going to win this tennis match. The Turks are proud of their pides, so don’t let them hear you call it pizza.   The crust is thin and light and you’ll find it topped with all types of goodness from cheese, herbs, tomatoes and meats.

In my past post about Favorite Greek Foods, I called this flatbread a pide, due to the fact, I felt like I was told this by my food guide there. When I was in Turkey, I realized pide is a Turkish term.

Earlier in the week, I noticed a couple of clam vendors on Galata Bridge carrying a box of closed-shell clams.  As a tourist seeing this for the first time, what would you make of it?  I couldn’t imagine why people might buy them individually or even a few and I certainly wasn’t about to buy a closed shell clam as a snack.  But I was soooo curious in the way tourists are when they don’t understand what they’re seeing .

During my food tour,  my clam mystery was revealed. The closed-shell clams are actually stuffed with a type of rice pilaf with herbs and spices. It was gastro-orgasmic.

The say clams are an affrodesiac. Maybe they should throw in Turkish “stuffed” ones too.

Cumin, pepper, zahter, sumac, parsley .. are just some of popular flavours of a Turkish kitchen.

Unfortunately, a stroll through Istanbul’s Spice Bazaar can feel so overwhelming, that you might not want to take that time to learn about the subtleties of a Turkish kitchen. Inside, vendors happily woo you in through small talk, offering you samples of food and sweets…. it’s like a Venus Fly Trap. Being vegetarian and an American tourist, I shy from this approach. Its easier for me avoid sampling anything in order to circumvent the aggressive sales pitches.  But I felt protected entering the Spice Bazaar under the premise of a food tour. 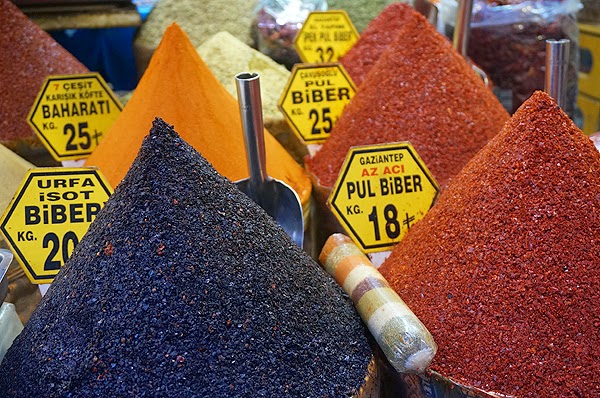 Ms T navigated us through the crowds to  a stall called Ucuzcular. Ucuzcular built its proud and fine reputation on developing their own spices from traditional recipes and quality ingredients.

There, we were given wooden scoops and a card with a list of 13 spices and its uses.  One by one, we sampled each spice and rated them, as if each had its own pedigree and culinary charm.  Smoky, salty, earthy, lemony or curry-ish… Yup…yup… no… maybe….  The spices were a complex blend of herbs, which you might use with salads,  breads, chips, BBQ, dolma, bulgur, lamb, meatballs, soups, chicken or fish.

Sampling a variety of spices to note the differences and whether I liked them (or not) had all the wonderful similarities of a wine tasting class.

Kadikoy: The Asian side of Istanbul

Across the river in Kadikoy ( the Asian side of Istanbul) and just a five minute walk from the ferry station, is a restaurant called Ciya (Caferaga Mh, Guneslibahce Sk. No: 43A,  Kadikoy, Istanbul). That we took a ferry to get there impressed me all the more. It felt like we were stepping outside the traditional comfort zone and into another neighborhood and one across the river at that!

Ciya was one of the last highlights of the tour and one that is popular with travelers taking the tour (I was told this by another traveler, who recommended this tour to me).

The special note of this restaurant stop is that Chef Musa Dagdeviren creates his menu from lost and forgotten recipes of historical times.  The menu is a mixture of complex to traditional tastes, a type of reconstructive fusion of traditional foods.

We all filed into the restaurant and had mezzes (aka appetizers) unrolled before us. The samplings were several, richly spiced and hearty enough to be a meal.  There were vegetable and bulgur mezzes, some meat ones for meat lovers, and tiny samples of different flavored wine and raki (Turkish anise-flavored alchohol).

Overall, I felt I had tasted a comprehensive range from smoky to sweet, musky and peppery to milky.  My Turkish Flavours walking food tour was certainly the best way for a vegetarian traveler like myself, to experience the gastronomic colours of Turkey without hitting a wrong note.

Note:  This tour was sponsored by Turkish Flavours, but as always, keeping it real.  My opinions are always my own.  Also, my memory card failed that same evening after my food tour.  Many of the photos here are  combination of a re-creation I shot the very next day and photographs belonging to Ming He.  Photographs are not to be used without permission by Ming He or GRRRLTRAVELER, respectively.