Summer warms up and with that a handful of things follow:
– the heat (Daegu is known to have the hottest weather in all of Korea– not looking forward to this!)
– mosquitoes (I’ve heard that at some point, I’ll need to invest in a mosquito net)
– Summer English Camp at my school and one other (and the last-minute notice I will undoubtedly be given to plan and give a 3-day lesson plan for both)
– planning my summer trip to Vietnam in August!

Houston, we have hummus!
While a large chunk of Korea was rooting on their team in the Argentina match, I was busy celebrating the fact I found a hummus sandwich shop in the maze of Daegu’s Bandwoldang! Even better– its next door to a low fat yogurt shop! Obviously, these are two foods that are not synonymous with Korea and they are things I’ve craved. Until now, they have been either difficult to find and or nearly non-existent!  Unfortunately, distracted by my experience of 7th heaven I forgot to pay attention where this shop was located! 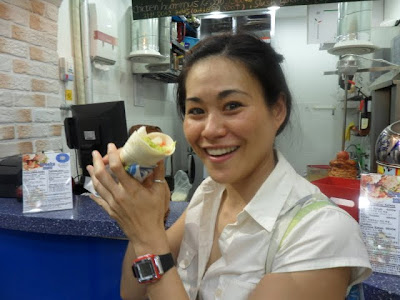 Korea’s World Cup fans and the Accidental Tourist
Today, many of 3rd grade students were up at the crack before dawn (3AM) to watch one of Korea’s World Cup games. Yes, parents actually let kids that young get up to watch the game!…  Koreans tend to be pretty patriotic and excited about the 2010 World Cup games, even though their team the Red Devils (aka The Reds) doesn’t have a very impressive ranking.

The 2010 World Cup games may be the current big thing here, but alternately, you wouldn’t get that impression when you look into my classrooms.  I’ve seen a few students in Red Devil t-shirts, some Korea logo face tattoos and one cheering stick. My students’ fanaticisms are pretty well-hidden and it would be hard for me to get the current news through my classrooms.

But sometimes, fate lands me as an accidental tourist. I was in Bandwoldang having a humus sandwich (above) with a friend last week on the night of the Korea vs Argentina game.  Every establishment seemed to have a TV playing the game, while red paraphernalia shirts, Red Devil headband horns, noise makers and faces of star players marked its celebrating sea of fan clientele. Popular viewing spots like bars and restaurants posted “full house” or “sold out” signs at the door, due to the game. Shop owners and sales people in their stores were cuddled around their tiny TV phones (you could see the antennas sticking up). Meanwhile on the streets, a few establishments ran their TV for an outdoor standing crowd.

When in Rome, why not do as the Romans do?

And a partridge in a pear tree…

One GO KOREA fan scarf,
a pair of blinking light Red Devil horns
…. and all I am is an accidental tourist!

2 plastic blow-up balloon sticks,
One GO KOREA fan scarf,
a pair of blinking light Red Devil horns
… and all I am is an accidental tourist!


Well, I couldn’t very well go home after my spirited freebies, so as an accidental tourist, I banged on my blow-up balloon sticks and shouted some Korean chants! 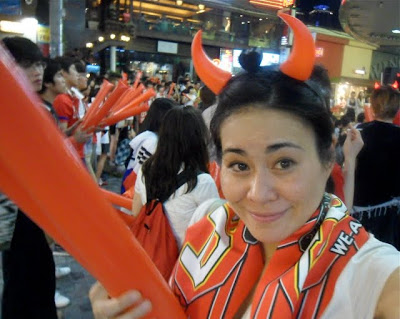 Farm Tour with EPIK
…Then again, not all my tourism is accidental. EPIKs Daegu City Farm Tour two weeks ago was a nice cultural introduction to Daegu and it was nice to meet some EPIKErs previous to us. As usual, EPIK treated us with the usual red carpet welcome. We got an experiential tour of a farm, where we got to weave an egg basket, watch the pounding of mochi (duk) and pick a basket of organic tomatoes (this was my favorite part, vegetarian that I am!) .  Then it was off to Herb Hills, an amusement and herb theme park, to join a soap making workshop and explore park rides, gardens, arts and crafts workshops and ‘live’ petting zoo where you could ride a horse or touch animals such as a monkey, sheep, etc… I got to pet a boa constrictor which was kinda freaky but also incredibly soft. Woo hoo! Lastly, we were bussed to Yangnyeongsi Herb Medicine Museum where we got to learn a little about the concepts behind herbal healing and health. Below are some pics from our tour.

Previous Post
Sex and the “Special” Korean: Top 5 Obstacles to Keep Koreans from having Sex
Next Post
Being a Vegetarian in Korea: The Costco Honeymoon begins… (Part III) 14 Must Try Vegetarian Dishes around the World