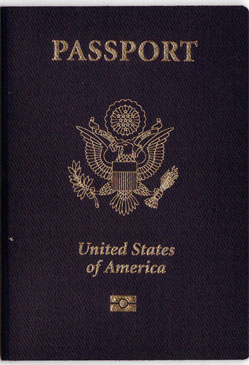 So my renewed passport cost $75.

It arrived last week and the color of my cheeks are changing back to rosy- Guatemala, here I come!

This summer I’ve felt a little glum from the combo of the recession’s impact on my work influx and the summer swamp heat in NYC. Not fun.  New York City with its looming skyscrapers and tread-milling can feel like a prison at times for a closet gypsy like me and the only thing I ever desire doing is to jailbreak and take a trip abroad. 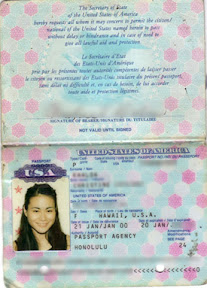 RIP to my old Passport: The two holes on the bottom page of my passport (the inside cover of the booklet) means that this old passport is retired.

How long does it take passport renewals to process?

The government website states that it takes 4-6 weeks to process your passport renewal. That means it’s locked away for that long. Inevitably, it’s when you don’t have your passport that all the flight prices begin to drop, ads for last minute travel  come out !

Fortunately, my passport arrived safely via mail just a little after two weeks!

The U.S. government passport department is not cruel afterall… just in writing.

Design-wise, I feel like it went from “official” looking to chunky and cheesy .   I want my official documents to look official–  not some attempt at “beautiful” and I don’t want a picture of Americana filling the space of EACH PAGE of my passport. All I want to see is that gorgeously inked validation stamp of the country i’m visiting. 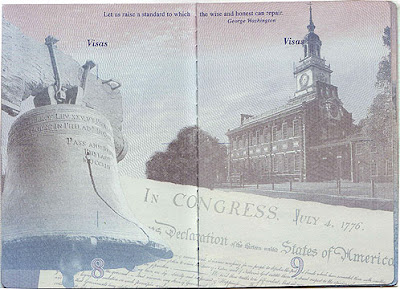 Inside the new passport: each page has a different Americana design

Sometimes the line at immigration is so long, that the attendants’ stamp has run dry of ink and you can barely it out on your passport….which sucks.  You flew the whole day, paid wad  of money and all you have is a barely visible hieroglyphic to show for your labors.  With the new US passport design, you may not notice the stamps at all… 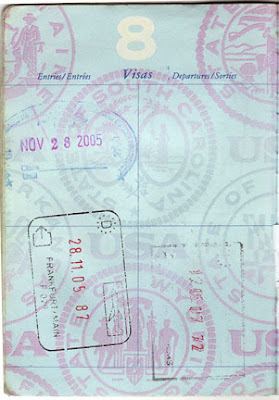 
Another thing I don’t like is the passport picture is now adhered to one of the sheets of passport paper instead of fixed to the inside cover of the passport booklet and protected by a thick plastic coating (in this way, the old version just seemed more  reliably solid, durable and less susceptible to accidental page tearing). 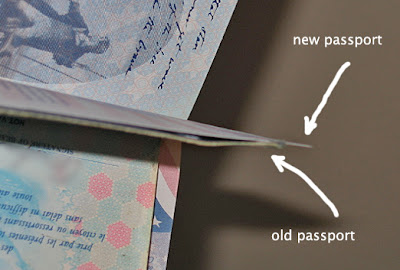 Lastly, I took a really lame picture this time. …And I did it twice!

Call me vain, but if your passport photo is bad, you’re going to have to hold onto  a picture of yourself for the next 10 years.

Where to go for a passport photo?

I decided the post office was the nearest for me. The postal worker behind the counter doesn’t care, is not a photographer and usually just wants to get the photo over with.  The guy I got was old, tired and photography 101 and careful composition was not part of his makeup.  When he showed me the picture he’d taken of me on his camera preview,  it had really large grids over the crucial features of my face so it was hard to gauge.  But when he printed it… yech.

When I pointed out to him that a 2″ by 2″passport photo should be filled with my face vs the  1/3 inch air  he took over my head, he shrugged his shoulders with a smile, told me I could retake for another $15 and began to ring me up.

I then remembered CVS Pharmacy does passport photos for half the cost ($5.99 after website printout coupon).

The girl behind the photo counter was having a really bad day due to a complaining customer in front of me….who incidentally, also cut in front of me to do it.  Grrrrreat.  When it came to my turn,  I joked with the girl to loosen her mood …But I wish someone joked with me before I took my picture. The picture still wasn’t as great as my first passport. But heck, I was tired of finding new places and wasn’t about to run home to reprint a coupon.

This is my new “Proud to be an American”  passport.  I will be throwing a passport party and all of you passport carriers are invited!  Requirements: you must dress as your “dream” country and you must not have a better looking passport picture than mine! 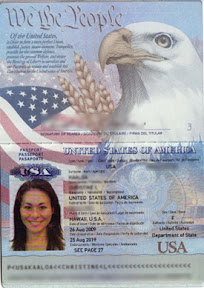 Previous Post
How to sightsee in your own city
Next Post
New York Fashion Week ’09: GREEN fashion 8 Reasons to book a tour vs D.I.Y. travel