Time to grab your Japanese fans and break out your kimonos and tabis from under the mothballs to join the celebration of bon dance festivals in Hawaii.

This month kicks off bon season in Hawaii but the first bon dance of the year, really took place in June on the grounds of Hawaii Plantation Village.

Everyone who attended got the opportunity to participate in the light-hearted fun of festival dancing- newbie and not. Being a local of Hawaii and half Japanese, I’ve been raised with an awareness of bon dance celebrations. But this was my first time attending one.

I met Ken, a retired naval ship repairman and volunteer guide at the Village. He was a passionate historian with an encyclopedic knowledge of Hawaii’s cultural history. Here’s a brief history to take with you on your first bon dance. 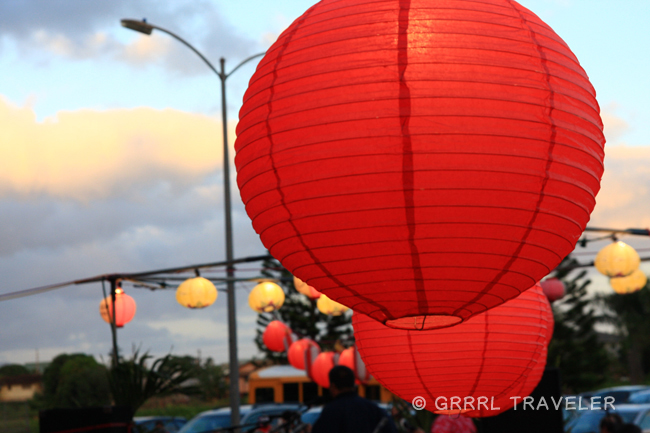 Bon Odori (aka Bon Dance) is an Japanese Buddhist folk dance festival and memorial held during Obon season (mid July-August) to honor the spirits of one’s ancestors. The name and inspiration of Bon Odori actually originates from *surprised hand-to-mouth* India’s Mahayana Buddhist sutra- the Ullambana Sutra– a story of a monk who dances for joy upon freeing his mother and ancestors from their past life karmas and sufferings.

Traditionally in Japan, bon dances were celebrated and performed by the entire community of a village or region. Each would have their own style of song and dance and utilize different kinds of fans, towels and wooden clappers. The songs and dances could depict a variety of things and sometimes specific to village life like a specialization such as farming (i.e. hoeing gestures). A raised stage for the musicians would sit in the middle of the village center, as the local villagers danced a giant circle around it.

The tradition of bon dancing migrated overseas to Hawaii during plantation times through immigrant plantation workers from Japan and since, its been adopted and adapted to fit into the cultural festivals and traditions of Hawaii.

Today in Hawaii, various local Japanese Buddhist shrines and bon dance groups continue to celebrate this festival tradition.  The dances are performed to many bon songs, but it occasionally embraces contemporary “adaptations” such as Pokemon or the Electric Slide. The spirit of bon dancing is welcoming to everyone and the gestures tend to be repetitive and easy to pick up.

If you’re the least bit curious and tempted to join in the contagious dance fun- no shame, just go for it and jump right in with that da’ kine spirit, brah!