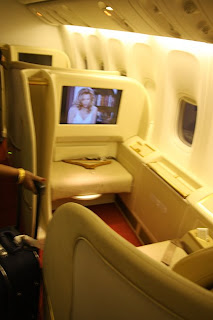 They say the differences between the rich and poor is extreme.
My friend, Sandeep is picking me up from one of the markets i’m at to go to dinner before catching my flight. Today, he is not driving his car because he has his driver! We take dinner at a restaurant in his neighborhood and drive by his 3 story house…no, mansion! He comes from the sector where growing up w/ servants, a cook and a driver is normal. As he says “Everyone has them- cooks and drivers and such… This is normal, right?” Well, maybe drivers are common in India (due to the wealth of taxis & rickshaws ) but this extended privilege of servants is normal only to my friends from the Phillipines who have been raised with servants who dress them and brush their hair!

I enlighten Sandeep to this and to my American shock only to later realize, we’re probably not far different in sheltered upbringing! Yesterday he was joking with me that his mother was freaking out because there were no servants, no cook (as it was Dussehra Festival– a holiday!) and they were left to fend for themselves. Ultimately, I wish I had gotten to see THIS face of India more to gain a bit of a balanced perspective of varying lifestyles. Somehow, this face seems to be more elusive, tucked away and less prominent than the face of poverty. We were supposed to drop by his home so I could see his home and meet his parents but getting out of dinner late, we had no time to spare in getting me to the airport! This time, instead of Sandeep at the wheel, it was his driver and we both, sat in the back seat. Even though I often have town car drivers for work, it feels strange to know this faceless man (I only see the back of his head) at the wheel is being paid by Sandeep’s family to drive Sandeep’s car for him while we sit in the back seat. It’s very chauffeur in the actual sense of the word.

(and before my mom says anything to this- yes, i’ve had chauffeurs all my life and they go by the name of Mom & Dad. I am just as spoiled as Sandeep, which is why we must get along well.)

Air India is my SPA ! Spacious legroom, 2 full Indian meals and free around the clock Bollywood films! Occasionally, there will be an announcement for a head’s up as one of the stewards goes down the aisles shooting 2 cans of air deodorizer so that all smells fresh. 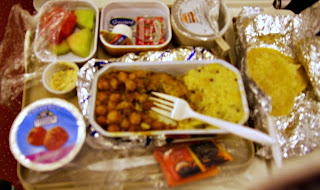 When I leave Delhi, it is 1A in the morning- I have a whole row to myself. Its a 15hr flight but it will pass very quickly for me. Looking out the window, to catch a last glimpse of Delhi lights, ironically, I only see my own reflection in the darkness…. That of me scouring/cleaning my face with facial pad which is quickly turning brown

…the easiest color to be when you’re in India!

Complete Guide to Transportation in India