Namaste Delhi! I can tell you’re gonna give me culture shock. 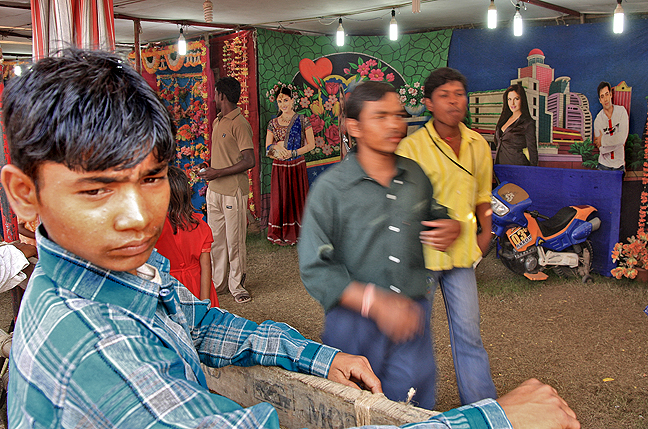 Carnival in India (notice Bollywood stars in the background)

I met up with my friend, Margaret and her friend, Dan, at JFK airport, where we excitedly boarded the plane together.

The Indian spice and Bollywood dreams filled the air the moment I boarded my Air India flight. Women in saris gracefully greeted us at the door. Male flight attendants walked down the aisles holding two aerosol deodorant spray cans, shooting them in the air. On our seats, a small plastic gift ziplock of earplugs, eye-blinds, socks and breath-freshener. Before me, my TV set monitor with an endless variety of film channels, filled with Hollywood and Bollywood films (read what my top 13 favorite Bollywood films are) (Om Shanti Om, Life in a Metro, Welcome, etc…)! 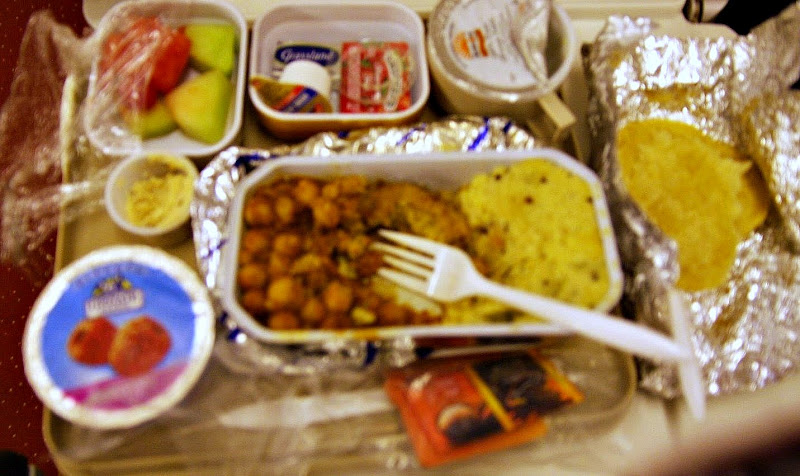 Namaste, Delhi! I can see you’re going to give me culture shock.

Delhi has got so many things going on at once. It’s hard to choose what my eyes want to see.

The drive in from the airport took us through congested roadways occupied by cars, pollution, auto-rickshaw taxis, cows and pedestrians. It’s all chaotic. On the side of the road, you see squatters (people are just hanging out) and food sellers selling carts of snacks, fruits and chai.

Paharghanj leaves, um…. a lot to be desired.

The area our hotel is in, Paharghanj. It’s noted as a “backpacker area” because it’s got a wealth of budget hotels. But its at a bit like Fez in that its somewhat backwards in time, crowded and poor.

Rickshaws, auto-rickshaws, motorcycles and pedestrians all compete on the same small dirt streets.

Noise pollution. Delhi has it bad.  A lot of high-pitched honking and beeping!

My first impression of the neighborhood as we entered it, was like dread punching me in the gut.

I felt like a wimp. Like a light-weight knocked over by a heavy-weight country. I knew India would be like nothing I’ve known. I was right.

Driving there, I saw:

•  Street food vendors string along the streets making it feel,  like a wide outdoor market.

•  The unpleasant odor of dust and urine tinges many of the alleys.

•  An over-population of homeless dogs, like staring Indian men, they’re bony and hunger (ironically, you don’t see many women at all)

•  Hotels choked into one block

•  Internet and “STD shops”.
( STD shops are shops, where you can make phone calls at cheap rates, not contract diseases)

… It all regurgitates a childhood memory of staying at a shabby San Francisco hotel in downtown Chinatown in the 80’s, where our family couldn’t even drink the tap water. Basic and run-down; it was the kind of ‘clean’, where you still don’t want to lounge on everything, without examining it first.

Some memories leave an indelible stain during youth. But newer ones inevitably arrive to claim the prize.

What is Indian efficiency?

India can make you laugh initially.

It appears backwards, but it’s ripe with hard-working value and labor.

It’s got many service hands to one job and that helps ensure efficiency. But sometimes, not.  In our hotel, one service hand washes the window and he’s got five guys watching him.

Sometimes, I think there’s just too many people. But at least India finds a way to employ them.

The Grand Godwin Hotel in Paharganj

Our hotel is small comfort to the shock of  Paharganj or even the Indian bathrooms, for that matter.   At $25/night our hotel is decent, but not as nice as the name sounds.

Still, all seemed clean. Everyone’s silk liners went out over the beds, nevertheless.

I have a roommate. Regina is actually from Hawaii and she’s Margaret’s friend. It’s the first time I’m meeting her. She has friends in Delhi and plans to hop on and off our itinerary. Regina generously picked up Vodaphone SIM cards for her, myself and Margaret (costing us 250Rs or $6).

There’s a lot involved in getting a SIM card, so it’s amazing she got so many. 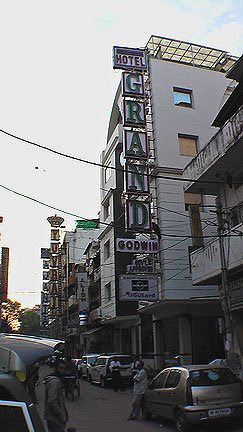 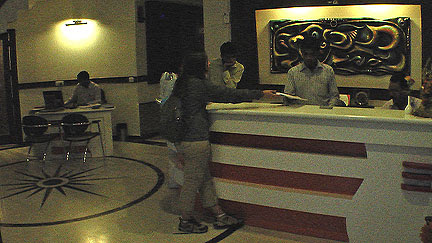 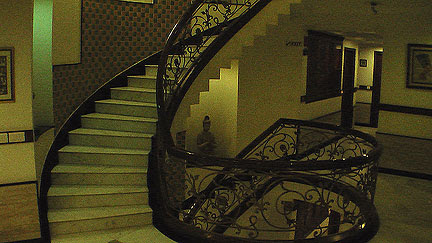 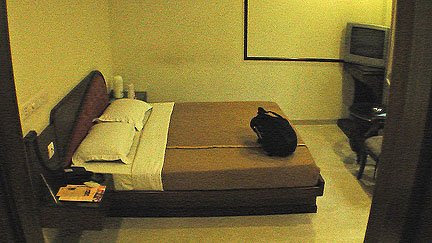 Thankfully in hotels, there are sometimes, western toilets.

However, there’s no separation between shower, sink or toilet. It’s just one room and one drain. All splashes go to the same place.

Also, there’s a large bucket with a small bucket inside it next to the shower.

You do the math. 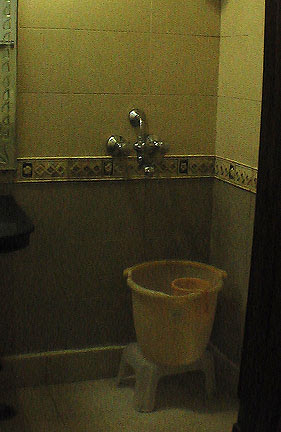 Tonight we will go into C.P. or Connaught Place for dinner. Then we’ll get our cards “topped-off”.

The rate here, is one ruppee a minute for a local call… which is like a one cent per minute.

“Top-off:” It means paying to put minutes onto your SIM card so you can make calls.

The over-population of men in India

I had a brisk walk through Paharganj at night and it turned from a stroll into a light jog.

If you’re female, walking around alone through Paharganj at night is like wolfing your food down at a restaurant. Even though I wanted to see and explore things longer, to do so amidst the dark stares of men made me nervous.

They say, for every twenty Indian men, there is one woman.

There are lots of men and not the Bollywood-hottie types I’ve been used to watching on TV, but those of a slightly darker shade, which blends into the night. They stalk you with their eyes and their stares are unashamed. Sometimes, they smile in a way you think you know what they’re thinking.

It’s creepy because it’s foreign. Something I’m not used to. For me, it’s culture shock.

I don’t know what they’re thinking. As a tourist, I don’t know if I’m doing something culturally wrong.

I see very few women on the streets and that makes me nervous.

In India, women and their work lives don’t have much visibility here. So it seems. Out on the streets, the marketplace shoppers, shop owners, waiters,.. are all men.

At my hotel, everyone from the cook to the maids and receptionists  … men. 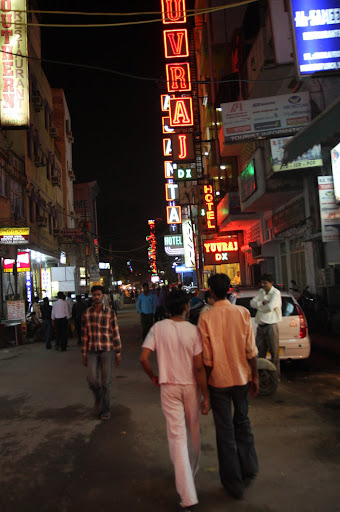 Night time in the streets of Paharganj What do STD shops in India sell?