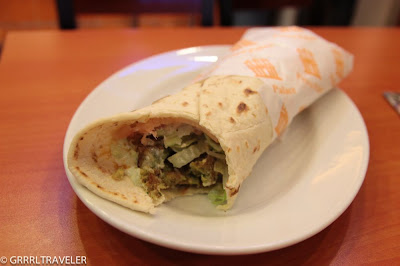 This post is for my expat homies in South Korea. I haven’t given you much love these days, but rest assured you’re still on my mind …

Some things are meant to be. Like second chances. They come around, staring you in the eye, even when you don’t know they’re there.

On my last food walkabout in Seoul, I reviewed a restaurant– Petra Palace (read my review)– that crafted falafels amongst other mediterranean dishes. My experience was not… so great– the owner was less than friendly and the falafels lacked character, flavor and spice. When I take a bite of a falafel, I feel like I’m inhaling the Middle East; my tastebuds on the other hand, still felt they were in Korea.

So the next time I hit Seoul, my quest was on again– find decent falafel sandwiches, the way I remember them! I strolled down Itaewon’s main street. Of all the middle eastern signs, there had to be a falafel somewhere — the whiff of roasting shwarmas was heavy perfume. But the handful of Middle Eastern joints I visited stocked only shwarma sandwiches… no falafels.

(Really? How can you have shwarmas but no falafels?)

I passed a cafe ; my eye caught on their outdoor poster menu.  Lo-and -behold, one of the dishes it advertised was “Falafel”. 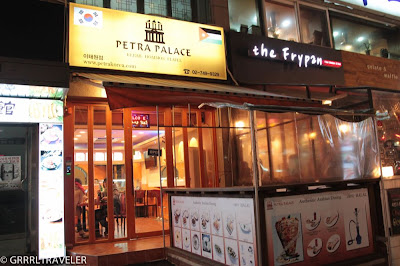 This couldn’t be. Not this easy. It was only a stone’s throw from the metro station!

I went in and sure enough. Falafel sandwiches for under $5. 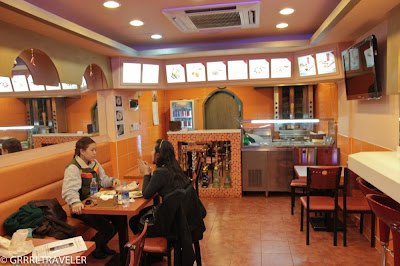 Heaven at last!  The sign on the cafe read Petra Palace, the fast food sister cafe of the same hillside restaurant that my friend, Soo Ha and I visited last December! Okay, so maybe some places deserve a second chance… or their siblings are better.

Did I inhale the musky spice of Jordan in every bite. Not exactly, but I was midway and I finally scored my falalfel sandwich!