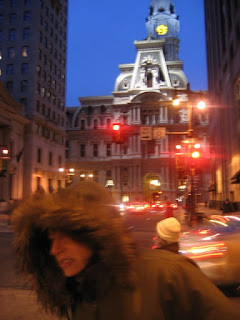 It’s about an hour and 45 min drive from my apartment in New York City to “Philly”. Our shoot is in the South Street district, the southern part of Phildelphia in a neighborhood characterized by a lot of 3-story residential apt buildings streets and cute nookish bars and restaurants.. Cozy and quaint, the neighborhoods in this area seem reminiscent of college towns or the West Village in NYC.  Our shoot location is a 5 min drive from our Marriott Courtyard hotel in the City Center (aka “downtown”) district which rings of Liberty Bell architecture and Americana statues.  The downtown “nut” streets like Walnut and Chestnut have a string of fusion restaurants ranging anywhere from creative, healthy, popular and fast food. There is everything from vegetarian wrap and smoothie joints, to contemporary Thai, Philly steakhouses and Dunkin Donuts. I am not without my vegetarian food options here ( if you can find street parking and can manage ultra tight east coast parallel parking!).

I am on a shoot for a MTV True Life Presents show about women and their breasts. The girl we’re shooting here is a Go-Go dancer so the peek into her life supplements for my lack of sightseeing Philadelphia proper. Sometimes, working as a camera person can be glamorous work with travel perks and sometimes, its WORK where my touristing turns solely into sightseeing into other peoples’ private lives. This shoot is the latter and while my crazy boot camp shoot schedule has currently disappointed my expectations to actually sightsee/experience Philadelphia, there is still the “privilege” of gaining access into  windows I would not normally think to scrutinize.

Instead of the city, I see the strip behind the tease of the scantily clad, boogie-body bean-pole girls with boobs (those girls that women love to hate at nightclubs, basically). False eyelashes, wigs, sequins bustiers, g-strings and high cut boots. I am exposed to “chicken cutlets” ( a new “regional” term for me in Go-go/breast land…for “falsies” that are to pad bras in order to make breasts look fuller. Chicken cutlets are in reference to the look of the falsies… it looks like the size and shape of chicken cutlets apparently). Unlike strippers who sell the idea of “SEX” entertainment, go-go girls don’t go that way. Instead, they sell the idea of “SEXY” upon high platforms overlooking the crowd with the props of a pole, cage or mirror selling the guise of mystery, illusion and aliasing of “sexy”. They are there to decorate the clubs with live entertainment and they stand on-stage to engage the energy and action of the club… and to be adored.

We get into Philadelphia about 12P, break for dinner at 5P and wrapped shooting at our last location, the Roxxy nightclub at 3A! It’s a literally, “NON-stop shooting” work day that feels almost LETHAL to shooters and the rigors of the cameraman’s body. It’s not about speed but durability and endurance in holding the camera steady for an hour+ straight and still be able to pull out a professional smile for the producer you’re with. We’ve shot anywhere from 6-8 long scenes on our girl on this first day and by the time I get back to my small luxury hotel room (my only haven of restorative consolation), I feel like a broken-down doll with plastic limbs, attached ONLY so that I can feel their ache.

The second day is spent going to stripper clothes stores on South Street (a popular strip of stores-bars-restaurants) and taking a quick break at a yogurt shop while the girls go out for pizza. Then its back to the apartment indoors for more wardrobe scenes and wrap-up interviews. We finally wrap at 9P and emerge from the apartment to find that it’s snowed and now there is freshly fallen snow over our rental car and the streets. We take a quick trip to Marathon Grill for a dinner takeout and beat it back to a snowing NYC. 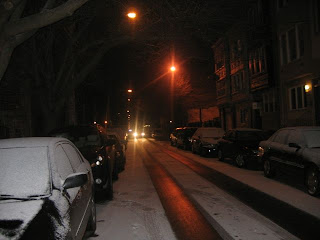 Philadelphia. Go-Go…I’ll have to wait for the True Life episode to air to see where Philadelphia went.