Madurai Travel Guide: Best things to Do in Madurai 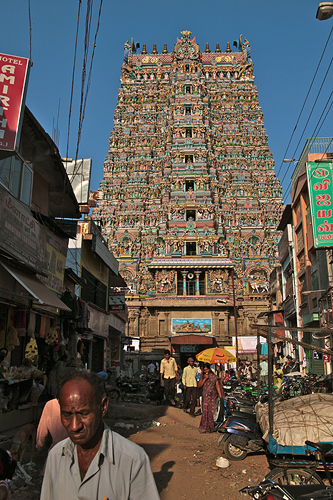 Is Madurai just another Indian town?

With India, you don’t always know what to expect.

It’s like the way Los Angeles used to be in the 80’s and 90’s before L.A. Country took to white-washing it to erase signs of poverty. I’d drive down the street and each block would change from ghetto to posh and back to ghetto again, like Christmas twinkle lights! Tattered old nondescript industrial buildings and rugged houses were torn up and  replaced with newly strip malls, trendy restaurants and hip boutiques.

India’s like that at times. When India’s good, it’s okay, but where poverty is visible, it’ll kick you in the gut and you’ll double over.

I’ve heard that Kerala holds a lot of capital, spreading out cleaner streets, orderly traffic, colorful and elegant mansions. I noticed less signs of poverty in places like Cochi, Alleypey and Trivandrum. In fact, en route to Kanyakumari, I even saw stores selling washing machines (whereas, a good chunk of India washes clothes by dhobi hand and in a river). I even traveled on a nice city bus with A.C. and a TV monitor playing Hindi film music videos. So traveling through South India… I was starting to gain a little hope.

What’s so unique about Madurai:

As the third largest city in the south Indian state of Tamil Nadu, Madurai is a city known as one of the oldest and the historical home of Tamil poets. As a main city, it’s a major transportation hub for trains, planes and buses, so the station bus station that I rolled into was huge.

The old city section is small and can easily be transversed in a day. It’s a pretty simple city with an abundance of textile shops and tailor shops, should you want something made. Most budget hotels and restaurants are located on West Perumal Maistry Road (parallel to the train station). 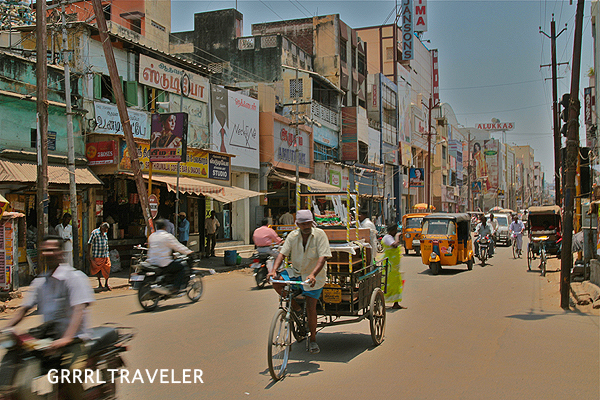 The city dwellers seem a curious bunch. It seems a wild mixture of resident locals, Indian pilgrims and occasional touts.  As the Meenakshi Amman Temple has a magnificent and architecturally ornate exterior to see, while also being a prime pilgrimage spot, the city does see a large boom of Indian tourism. So this can attract a mixed bag of folk. In a way, this is reflected in some of the ornate and color traditional costumes. 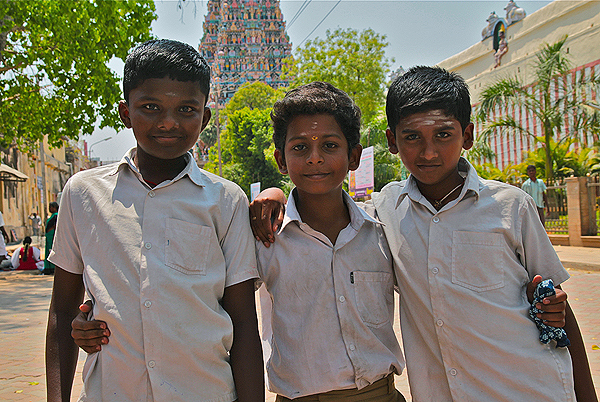 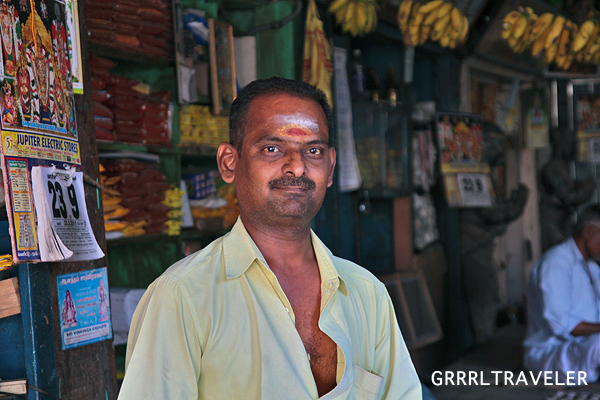 Banana seller in temple (Bananas for the elephant, maybe?) 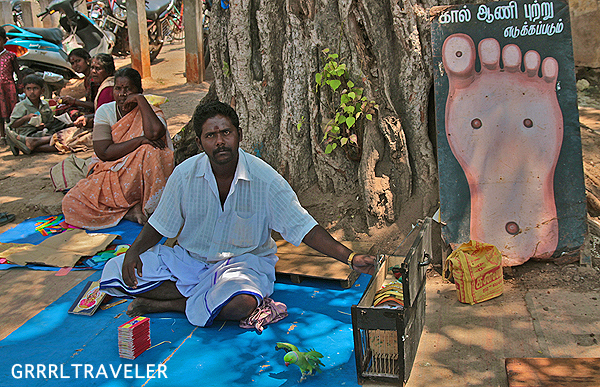 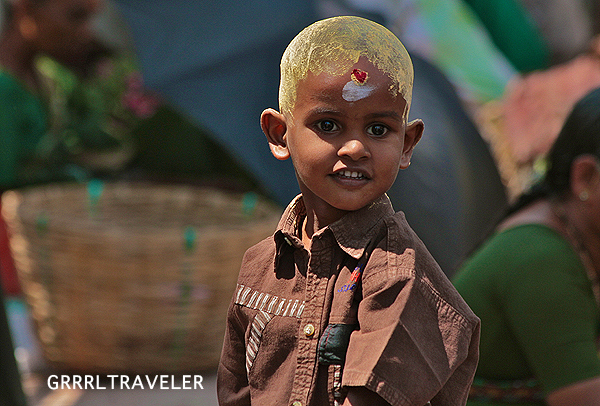 boy   at the temple 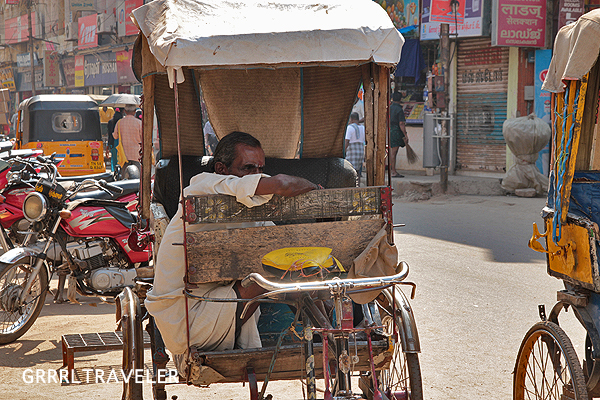 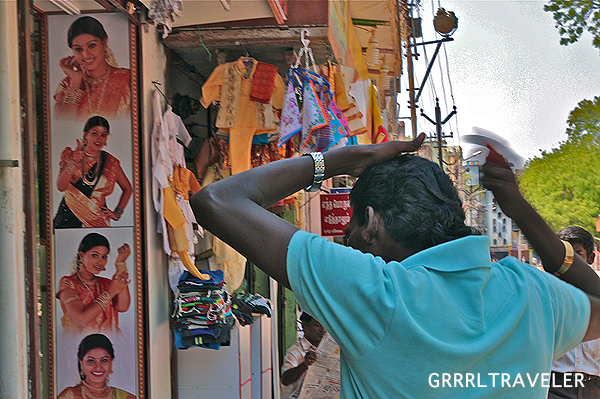 Man styles his hair in the streets 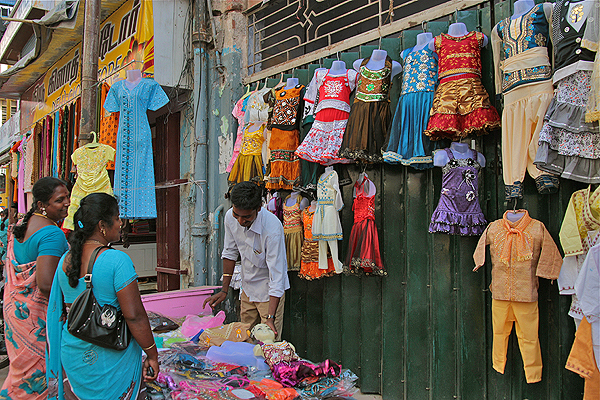 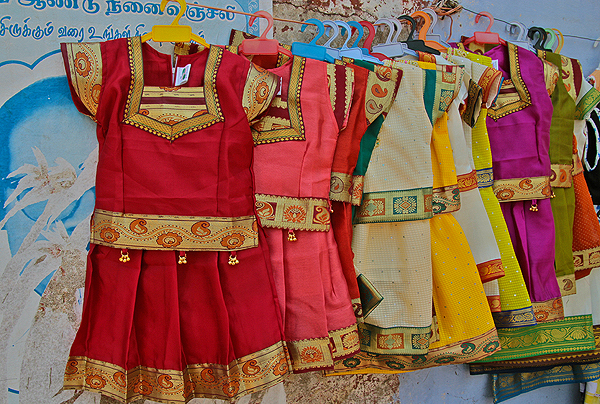 Best Things to Do in Madurai

The Meenakshi Amman Temple is the main and most beautiful site to see in Madurai. The architecture is the shining star of South Indian temples. Dedicated to the goddess Meenakshi, a three breasted, fish-eyed goddess (also known as Paravati, the consort of Shiva), the temple has 12 gopurams (i.e. gateways) and many rituals and festivals occur on a regular basis. While it’s size is impressive, it’s multicolored relief sculpture artwork of gods and goddesses is absolutely stunning. Not to mention, it’s said there are some 30,000 sculptures in the temple and it employs some 50 priests. This temple the one jewel travelers go to Madurai to see.

Inside the temple you can receive blessings from the temple elephant.

Neighboring textile shops around the temple offer a visit to their rooftop to see into the walled pavilion of the temple. They claim to have the best view of the rituals going on inside. Caution to travelers: It’s possible this could be a scam or a way to get you to look at and buy goods in the store. 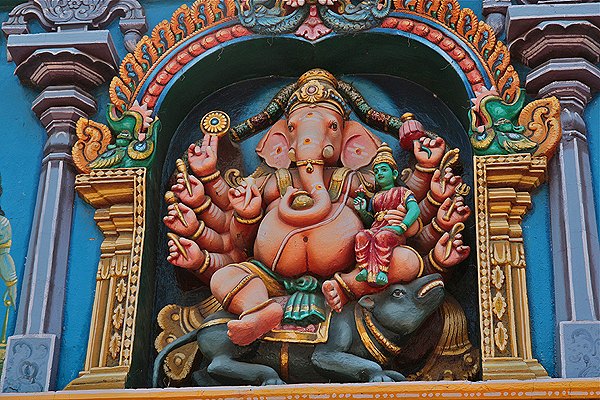 Ganesh in the South is very colorful 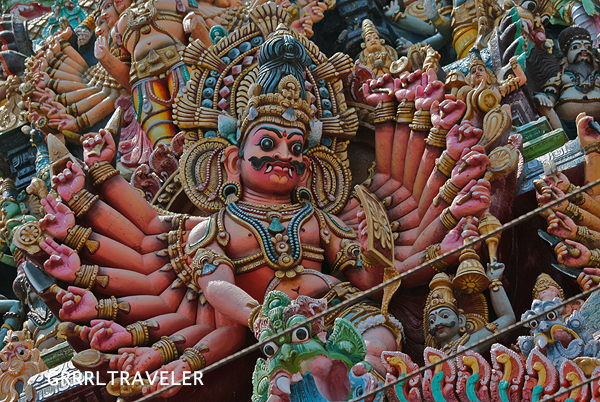 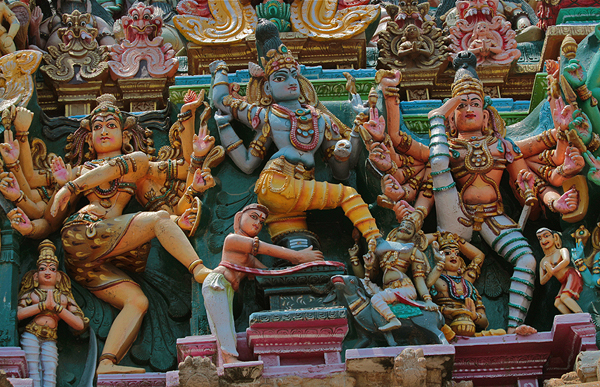 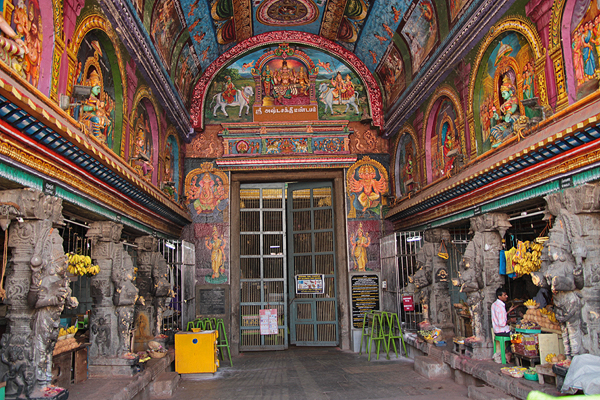 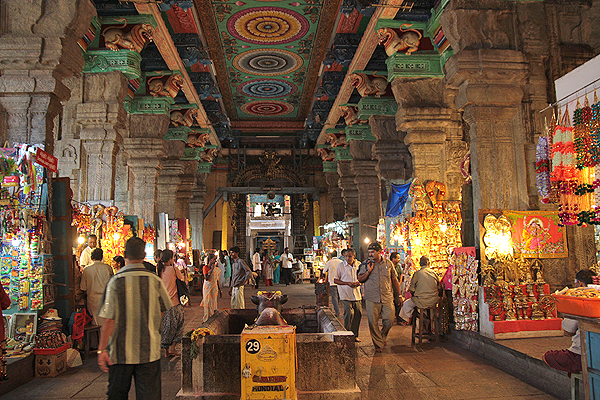 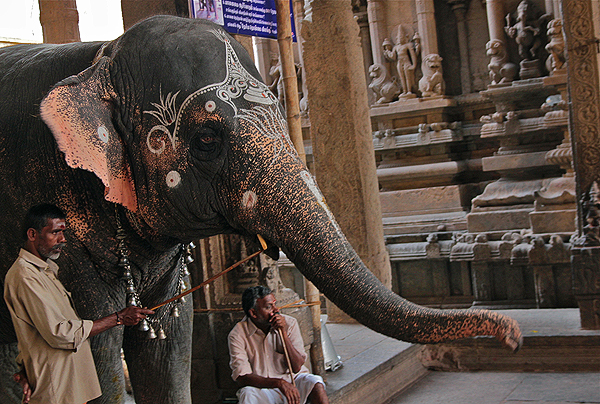 2. Getting clothes made and tailored for you

On the eastern side of Meenakshi Amman Temple, you’ll find Puthu Mandapam, a pillared hall with rows of tailors, busy at work sewing or selling fabrics in their stalls. Show them a photo of what you want and they may be able to whip up a copy of it. If you’re not into shopping, it’s still an interesting sight to see. 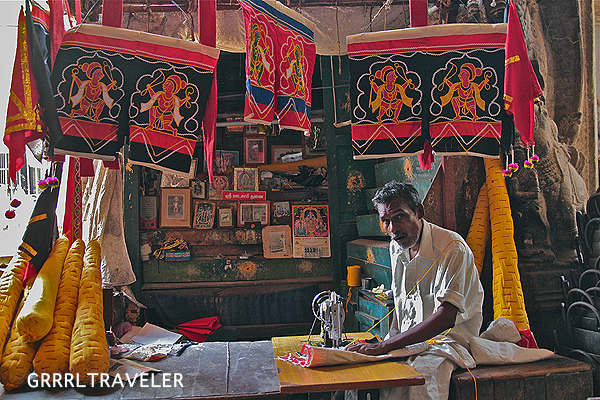 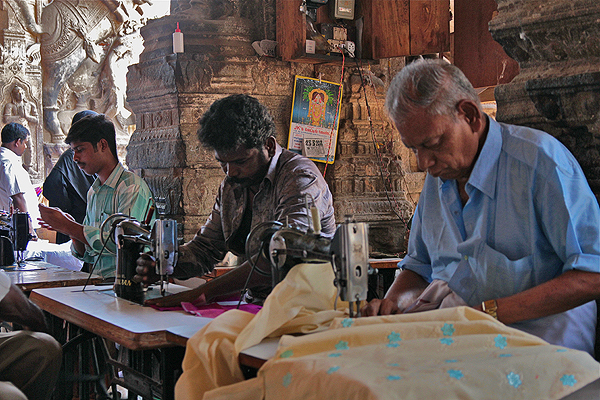 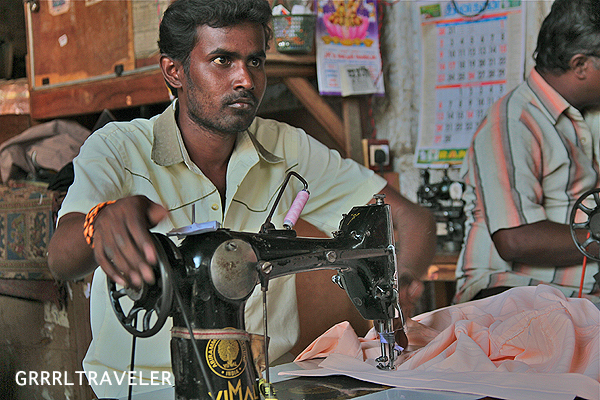 Most tailors (and workers in India) are men 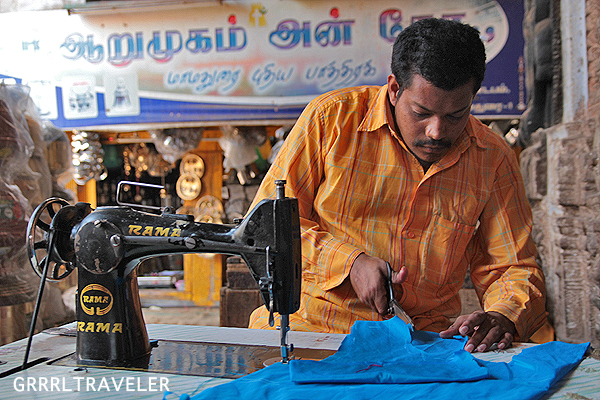 What and Where to Eat in Madurai

The traditional South Indian dosa is typically served on a banana leaf. These typically run a few ruppee but are under a dollar and is fit for a meal.

Travel Foodie tip: Try eating with your hands. While you may feel squeamish to feel your food squish between your fingers, I’ll say there’s an extra flavor to the sweat off your palm. For some reason, food tastes just a little better when you’ve fingered it.

My recommendations of things to try are similar to my post about Kanyakumari.

The restaurant is basic but clean, prices are good and their menu of South Indian dishes and sweets are bountiful. What are your best things to do in Madurai?

Previous Post
Returning from a Gap Year: 9 Tips to Starting Over
Next Post
How to mail things home from Korea