The god Shiva is known as the destroyer and transformer. In Sanskrit, he’s known as ‘the auspicious one‘, destroying evil, ignorance, and death. He also maintains the cycle of life because his destruction of evil, clears the path for renewal and growth. Many Shiva devotees makepilgrimages to the Ganges River to bury their dead as Shiva is said to absolve sins of this lifetime.

Another form Shiva takes, is occassionally,  Nataraj, the dancer who creates and destroys the universe in his step. Other times, he’s seen as sitting/standing in meditation with a trident or crescent moon. Another version of him is represented in lingams (photo below).

A ‘City of Temples’ and Hindu worship

Temples in this city range from large to small, community to household and Shiva lingams (ovular rock eggs held by a shallow rock bowl/plate) make common public altarpieces where one can pray.

Aside from larger-known temples (ie Vishwanath, Shiva, Durga, etc… ) there are thousands of temples, home and public altars within the small radius of each neighborhood. 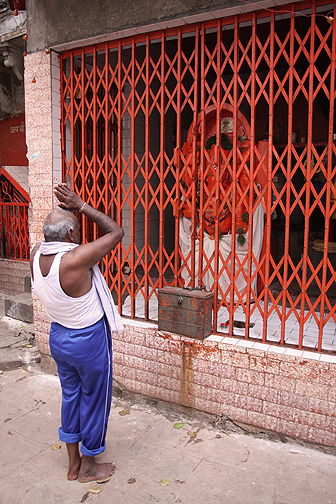 If you’re still not sure if you like, love or hate Varanasi, then try this…

My boat cruise down the Ganges at 6 AM felt beautifully special …and not, with reason that at least a 100 of other tourist boats were out on the waters racing to make the length of the Ganges before sunrise!

By boat is the only way to see the overall bathing ghat life, morning sun salutations, chanting, meditations, yoga postures and people washing their clothes on Ganges. Man, woman and child are there- a dip in the Ganga water is holy and purifying, so many lather up and take a baths in it too! Most are so devout and absorbed in their water ritual, they are nonchalant about the 100+ tourists boats observing and photographing their every move.

Over a hundred ghats line the river bank and some are more prominent than others like Dasaswamedh Ghat (the main/central ghat), Manikarnika Ghat, Harischandra Ghat, Kabir Ghat and Assi Ghat. At one ghat you may see a teacher chanting over a loudspeaker microphone, another you’ll find many saddhus (holy men), yet another is mostly women. Each follower seems to have their favorite. 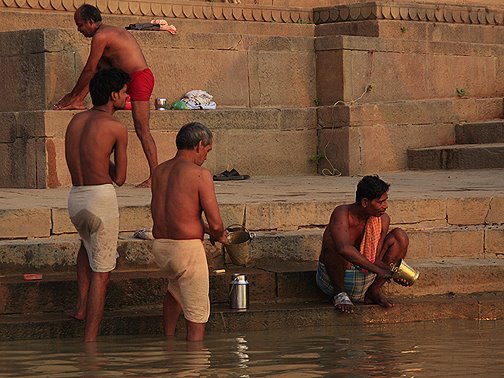 My boat driver, Ajay, was a bit on the rolly-polly side and slow, stuffing his mouth with betel nut occasionally so that his explanations took on a new hybrid accent of “Indian-betel nut” garble. A bit frustrating.

After taking me slowly up and down the river, he  took me to the old burning ghat where he insisted I take the walking tour. It all smelled like a scam to me. Every “guide” in Varanasi wants to take you there and I suppose it’s cause they get a cut off of how much you end up “donating”.  Still, I played along…

The burning ghat burns around the clock and mountains of chopped wood ensure the flame never goes out. Family members bring their departed loved ones for cremation. Their ashes, thrown into the Ganges, to release the soul of the departed from its reincarnation cycle.

The burning ghat has one rule: NO children, expectant mothers, sadhus or lepers.

The reason for this rule: many see children as pure souls and expectant mothers are their carriers. A sadhu will have achieved enlightenment, soul state by the end of his lives and lepers simply pose the threat of disease. Instead, these exceptions will get a water burial in the Ganges via weights tied to the body (I try not to think of how many sunken corpses must be at the bottom of the Ganges)

“I want to see one of those dead bodies floating in the Ganges! ” said Margaret, when we were planning our India trip.

Now that Margaret wasn’t here and I was in Varanasi, about to get my opportunity. I wasn’t sure I wanted it.

When I stepped off my boat onto the muddy ash-stained soot, Bam!   The dead were wrapped in white, sari-like fabric and lined along the water’s edge, awaiting their turn at the fire.  I passed a body being burned on the pyres.  I could make out part of its face.

I felt guilty. To be there gawking as a tourist felt sacrilegious. Sensationalist. Exploitive. Although witnessing dead bodies being cremated wasn’t as grotesque as I thought it’d be. Quite the opposite. The homage and respect Hindus pay towards the dead felt beautiful while the exploitation of it left me with an ugly feeling.

A man came out and led me around- keep in mind, there’s actually not much to see- that funerial pyre of the old burning ghat is it.  The non descript Indian man took me behind a building to show me where they house the lumber or wood to feed the fires. Families bringing deceased loved ones must pay for the wood- he told me 1 kilo of wood cost 150 Rs.   Then he led me into the building across the funerial pyre for an overhead view of the ghat but led me into a room in the building instead. The building looked vacant, with no real shutters to hold anything in… it looked like a deserted building which was set for demolition and yet, it has been there for a long time. He led me to an old lady sitting in the open room and she held out her hand, saying I should donate to help families afford wood. How much can I donate? At that point it solidified I was getting the shake-down in private.  This was where the scam culminated.Whether it was a threat or not, I wasn’t about to assess the matter, being a solo female. I wasn’t about to struggle and luckily, I didn’t bring much money with me- I pulled out a small 100 note I keep accessible to show people how little I carry. I gave it to them and walked back to the boat where I eyed my boat driver meanly.

Oddly, locals are fascinated and privy to that scam. Undoubtedly, the kickback commission is lucrative. Children who are trying to get you to hire them as guides and boat drivers too, will try to lead you there, asking if you want to go. They all know how the scam goes and if they find out that you went there, they’ll ask you how much you’ve donated.

Best Things to Do in Varanasi (Experiential Video) Varanasi Travel Guide : Best Things to Do in Varanasi