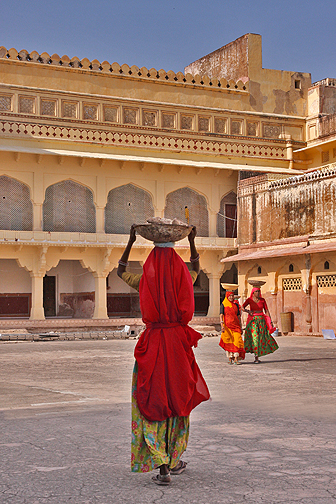 What is there to see in Jaipur’s Pink City?

In Jaipur, “the Pink City”, is the once capital of Rajasthan and home of maharajas and Rajput Royals.  It got its nickname due to its coral sand architecture. Today, elephants are more of the preoccupation for me.

Our sightseeing itinerary took us to all the well-oiled tourist joints. Can you blow through Jaipur in a day?

Top 5 things to do in Jaipur

We hiked up to the Red Fort, then visited the Hawa Mahal (aka “Palace of the Winds”), which stood a block long and covers part of the City Palace, but is almost literally a like a movie set facade. There’s no real back to the front.  After doing the historical tour of Jaipur, we were whisked to the beautiful Lake Palace (the one lake in Jaipur), where we took an elephant ride. 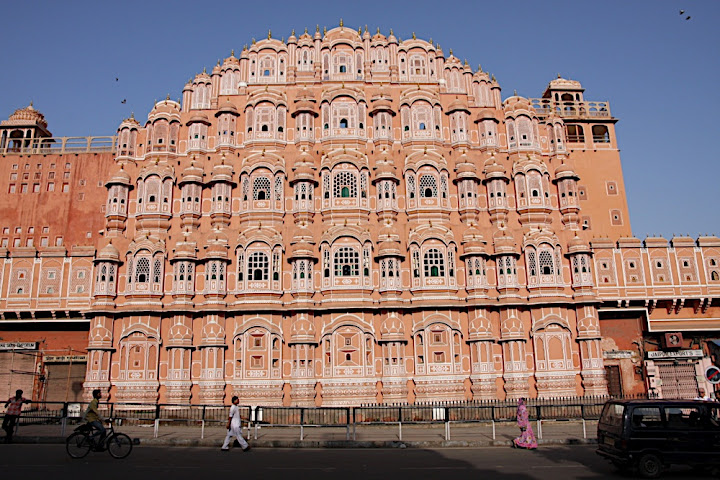 A slideshow of our sightseeing photos:

2. Should you ride elephants in Jaipur?

Elephants were once considered the vehicle of maharajas and Rajput royalty. Today, royals own cars, so these giant and gentle creatures are used mostly for tourism.  You’ll see them about when you visit the Red Fort.

I always feel a little ‘iffy’ about animal rides. I know that they’re used as tourist attractions; they’re a way to make money. Not all keepers treat their animals well; likewise, camels are also used for tourism and to do hard labor of pulling carts for farmers and workers.

I was a bit reluctant to hop aboard this baby elephant. They’re quiet but social beings and sometimes, like to be little tricksters. My baby elephant was being playful with me, so I eventually hopped aboard. But the truth is, it still didn’t feel good to ride it. The keeper kept his baby at the side of the road, so the elephants walked on a concrete road. I’m not sure if I’d want to do this again.

Note: As of 2010, I stopped participating in animal tourism, which I consider a cruelty and exploitation of animals who cannot choose for themselves. I learned elephant riding is one of the cruelest forms of animal tourism as elephants are broken and babies are made to work alongside mothers because they don’t want to be separated. 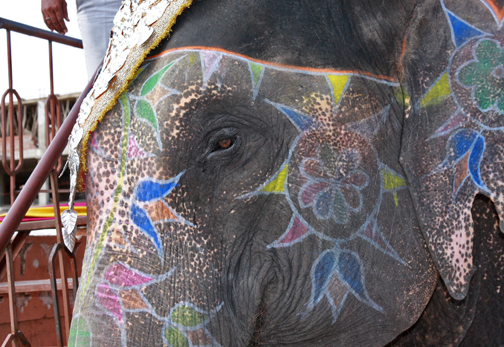 None of us wanted to go to commission stores for shopping. But our driver Kul, said that he had to take us. We didn’t need to buy anything but nonetheless, he had to take us to these stores or they would complain to his boss that we never arrived. That’s how it goes.

So we went, we looked through clothes factories and saris and when we got to the jewelry store, we shopped a little. Damn. We ended up visiting a jeweler, who is also a “palm reader. ” He read each of our palms and then prescribed a piece of jewelry to buy to bring us good luck! Okay, I’m a sucker for witch doctors and tarot card readers, so I ended up buying myself necklace and Margaret, a birthday bracelet, that I could have bought at home for the same price! Were they authentic gemstones? 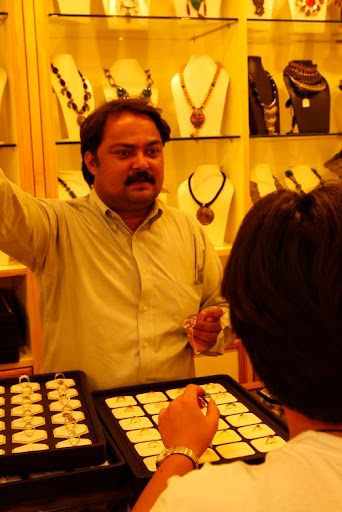 Finally, we got to explore the bazaar markets and nestle into some normal shopping. The local markets are tucked in the alleyways and are rife with  interesting local livelihood. From men peeing at open air wall urinals to local juicers squeezing sugar water from sugar cane, money change dealers with mats laid out and men surrounding them, to confectioners squeezing out jalebis (aka syrupy sweet pretzels) into the deep fryer.

Jaipur like much of the India I’ve been seeing so far, is populated with men and it’s men who are its visible workers. It’s hard not to feel intimidated when you’re stared at, which is a common with Indian folk. Staring.

Before leaving Jaipur in the storm which we arrived, we went to the famous Raj Mandir Cinema. The cinema is the pride of Jaipur as it’s interior design is more opulent and impressive than most. Built in 1976, the Raj Mandir is like a well-preserved opera hall with plush red velvet chairs and various levels for audiences to sit in to watch the movie.

Our driver went to get tickets but generally, there’s both, ticket lines for both, Men and Women. Many queues are sex-segregated in India probably due to conservatism and the fact, women can easily be subject to sexual harassment. Due to the fact there’s several levels in the cinema hall, the admission seats are probably charged accordingly.

The movie we saw was “Singh is King”, one of my favorite jhodi couples,  Akshay Kumar and Katrina Kaif. A Bollywood fan, I saw this movie twice in the States as soon as it came out, but this is my first time watching it without subtitles. I decoding foreign films aren’t too difficult if you’re focusing on the actor’s expressions and the scenes taking place. Afterall, good acting should cross language barriers and Bollywood films come loaded with lots of song and dance numbers. Still, without subtitles, it takes patience and active interest or your audience will fall asleep.

I had seen the movie and knew what was going on, so I did a voiceover for Dan, who was trying his best to stay awake.  Surprisingly, I remembered the dialogue so could translate it pretty smoothly to the end. Not sure if Dan stayed with me for that long…

Driving down a dark Indian Highway at night

Bikaner is about a 5-6 hour drive from Jaipur. Why Bikaner? Well, we’re not attending one of it’s famous camel festivals, but we’re bedding down in this city, because it’s near Deshnok, a small village town which houses the Rat Temple… and we had to see the Rat Temple.

We were trying to get to Deshnok and beat nightfall, but it was quickly falling over us.

Indian highways are dark with little to no light. You’re pretty much reliant on car headlights. Wanna know something more shocking?  Indian village folk still travel at night and by foot. Yes, they walk on the side of the highways, to get home.

They walk. In the dark. Without flashlights.

I know eyes adjust to darkness but the darkness on the highways, my eyes weren’t able to adjust to.

Thus, when you’re driving at night, you have to be careful. Cars can pretty much take people out if they don’t have car lights. You won’t see the pedestrians until you get up close. Kinda eerie.

Next stop, Karni Mata Rat Temple in Deshnok >>  then to  Jaisalmer >>