How to catch a country bus in Nepal | Dakshinkali Temple

There’s an air of festivity to the country roadside. It is the first day of Dusshain (or Durga Puja) .

Many are making pilgrimages to Dakshinkali Temple, a temple tucked in the countryside of Kathmandu Valley. It is said the temple holds regular animal sacrifices each Tuesday and holidays. Today, in lieu of Dusshain, the temple is said to be “flowing with the blood”.  Family-packed motorcycles, passenger-crowded trucks and festively-flagged country buses, decorate the Taudaha country road. like sparkling Christmas lights.

Getting to Dakshinkali Temple from Chobhar Village

Getting to Dakshinkali Temple from Chobhar Village, I have to take the country bus! I’m excited.  The fronts of the country buses in Nepal are painted in festive design. When over-crowded, there are passengers spilling out from the sides and riding on rooftop.

How to decipher buses in Nepal

There are 3 main types of buses in Nepal :

Country bus (village to village):   These look like regular school buses- short or long- but with festive décor, especially on the inside.

Long distance (city to city): They can look like your standard Greyhound or a regular city bus. How to catch a bus in Nepal

Sometimes, I forget to ask important questions when I travel …like “How do I catch the bus?“

I reached the bottom of the hill of Chobhar village (a ten minute walk downhill) and looked for telltale signs of a bus stop. There were none. Standing on Ring Road, I watched as several cars and motorbikes packed with families, rolled down the hill on their way to Dakshinkali Temple.  But where the hell was the bus stop? I stood next to a roadside shack, selling ice cream.  Two nearby cows reclined up against motorcycles and a couple of sari-clad women hung out in a squat, waiting to see what I would do… I stood and waited up to an hour baffled as to why buses were driving past me, but not stopping.

When the only boy waiting for the bus alongside me, boarded a passing bus using a  “run and hop” method, I started to feel uneasy. Catching a country bus wasn’t a passive sport!

Fortunately, I met Sanjju, a 5 foot tall Nepalese biker. He lived in Santa Barbara but was now, flying down the road doing “dare-devil wheelies”, training to represent Nepal in a big bike race. While waiting for his entourage of friends to catch up, he disclosed the local secret to hailing a bus.

After some time chatting with Sanju, I hailed and boarded my bus! Over-crowded with passengers, I had to hold onto the side rail to keep from spilling out! 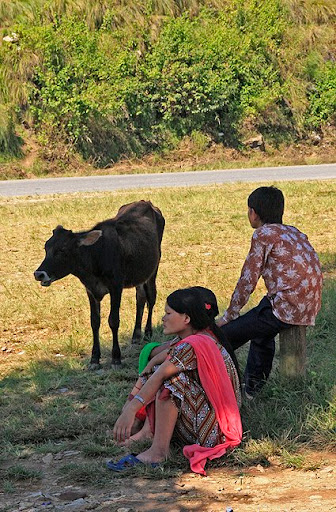 Inside a country bus in Nepal

All the festive decoration you see on the outside front of the buses, continues inside the bus too and is accompanied with Bollywood music blaring from loudspeakers!  I call this the “Nepalese Singing Bus” and at the cost of 25Rs (a little under a 25 cents USD), I don’t know why I didn’t try this sooner. The driver section of the cab is decorated with garlands and hanging cha-chas, which jiggle a dance to the bumps of Bolly-roading. Additional cushion seats and an open view of the road are available in the front cab with the driver too.

Whip around to the back and you’ll see a sea of beautiful brown faces clothed in an array of colorful saris, bangled hands and fez-like cloth hats staring wide-eyed back at you.  It’s both, a beautiful and curious sight for a foreign traveler like me to see.

How tall is the average Nepalese?

As a 5’8″ Asian-Pacific Islander, I feel giantess!  I  cannot stand to full height while riding in a Nepalese bus and thus, … I cannot blend. Instead, I stand hunched over, and come to discover the entire bus has their attention fixed upon me for viewing entertainment.

Seating in the Nepalese bus

Locals transport many things on the bus from food and produce, even occasionally livestock. Either they will store it at the back of the bus or on the rooftop! How they get them in, on or out during peak crowd conditions, I’ve no idea.  A bus attendant wades through the bus collecting fare.

The Nepalese are friendly and accommodating people.  Standing out as “obviously awkward”, with my neck craning to keep my head from hitting the roof, people were thoughtful to offer me seats. The first seat offered had baby vomit on it, so I declined and opted to stand. Next, I was offered an arm rest to sit on. I was grateful, but still hunched, because I wanted to look outside the window, where a funeral procession, carrying a body wrapped in white cloth, crossed the road. My third seat was at the back of the bus on a heap of grain-filled bags.

Things travelers should know about etiquette in Nepal

NO eating with your left hand,

NO sharing food/drink which has touched your lips (to share drinks, you would “pour” the water into your mouth vs sipping),

NO blowing your nose while eating, etc…,

I was a bit surprised that sitting on someone else’s grain bag was not considered offensive.

Nepalese people are friendly and kind

It was on the heap of grains that two young girls, Latika and Reiju (approx 11yrs) adopted me. At first they whispered to each other, pointing and giggling at me, while looking at my New Balance shoes. They were trying to decipher my country. Finally, Reiju leaned over to ask me where I was from. The girls (along with their mothers and Latika’s little sisters) were going to Dakshinkali Temple for Durga Puja. When we arrived at the temple, they pulled me along to follow their family puja. Each girl gifted a part of her own puja to teach me the experience.

Latika placed a red tikka on my forehead, gifting me her garland rope tie. Little sister #1 placed her garland tie around my neck & little sister #2 fed me a piece of her food prassad (aka homemade sweet blessed by the priest for taking puja). Reiju gave me her red garland tie as well.
Such was my initiation into puja, into their family-friendship and them, into my heart. I in turn, entertained the girls, letting them take pictures with my camera. Latika and Reiju went crazy taking pictures of us, me, flowers, their mothers… and more flowers…. At one point the girls all started picking flowers and giving them to me. This day was to be one of fondest and most defining memories of Nepal!  Those little girls became sisters to me. 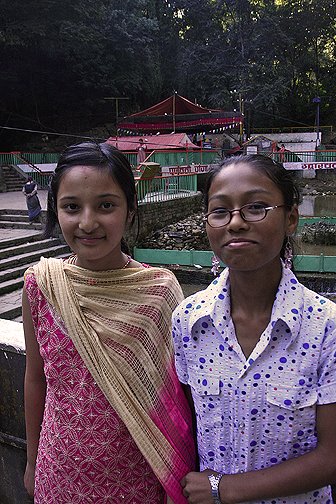 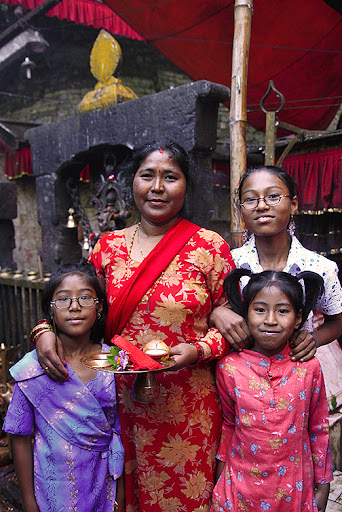 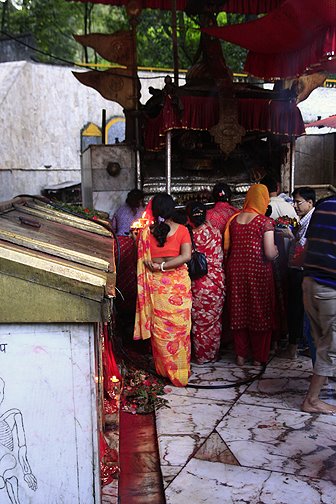 the blood of sacrificial goats is the red you see… 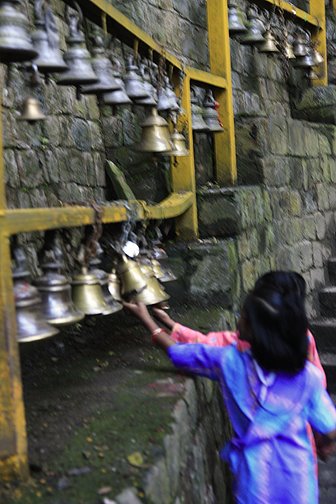 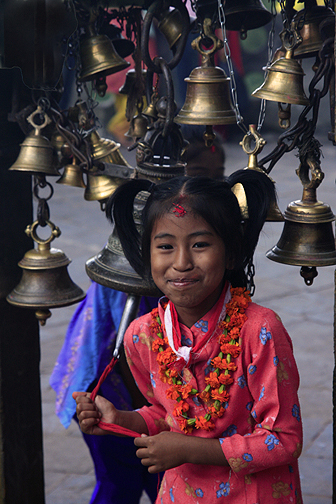 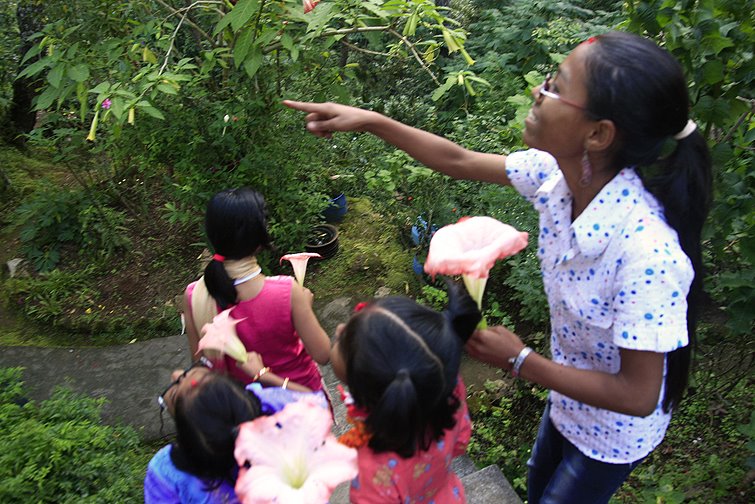 Should you accept street food from locals?

Traveling in countries where the water is considered unsafe, I try to adhere to strict “Safe Food Rules” as if it were an ass-tight religion. But there is no easy way to steer clear of food if it’s offered to you out of friendship. Some people have no problem maintaining strict NOs in their food standards, despite risking hurt feelings.  I consider those people rude.

When my little friends, offered me a portion of their own prasad from their hands, I took it. When they wanted me to try a berry their mom had given them and pushed it past my pursed lips… I chewed. When they begged me to take chai and roti (aka bread) with them from a  street shack (BTW- much to my dismay, their mom paid for us all, despite my offering), etc… I ate.

When you have four young and beautifully eager pair of eyes awaiting your response, What can you do?… You silently pray “God Bless Germs”, open your mouth and insert sickness.

If sickness comes in any form, this would be the loveliest. My rule of thumb is however, if a Nepalese mother would let her child eat these things, then it’s fine.

In Nepal, be home before dark

Everyone tells me that as a single woman traveling the countryside,  its not safe to travel at night and to be home before dark. Once night falls, it gets dark and there are no street lights to light streets. The economy in Nepal rumors to be in bad shape and there have been cases of foreigners and women being robbed, even kidnapped. But this isn’t the only reason.

To be specific, this means you have to find your invisible village bus stop in the dark!

Getting to Dakshinkali temple felt easy, but returning was my first lesson in true travel panic.  I left Dakshinkali under the wing of my new friends and their mothers on the last bus out, it was still daylight. Sunset came and went. When night fell, it was very very verydark. Pitch black to be specific. Thus, I had four obstacles:

#1: I forgot to count how many stops would lead me back to my village.

#2: Even if the bus found my stop, there was still a 10 minute obstacle course up a winding hillside road to the village and my resort stay.

#3: Translations to English were weak. Somewhere along the lines I was charged 125 Rs bus fare, due to a situation of “communication failure” (or tourist extortion).

#4:  Panic was setting in. Man, woman or child- NO ONE on that bus thought it was safe for me to get off of the bus alone to find my way in the dark. Finally, I had a communication breakthrough- the fare collector affirmed a Chobhar stop!

Always carry a flashlight when you’re in Nepal

When the bus left me at my stop, all the light had left with it. The night sky and the stars were a brief consolation (If you can see the stars then all is not completely dark & stars don’t move, so you can navigate by them…that’s what the Ho’okulea did). Fortunately, the hillside wasn’t as deserted as I’d thought- occasionally, a car or motorcycle would drive by and shed light to the path ahead. Another handy tool was my free keychain mini flashlight that I remembered I brought for such emergencies (never discount free- it can sometimes save you). Scared shitless and briskly hoofing it up that hill, i made it back to my hotel and into the safety of a concerned resort manager and an electric lamp with 1/2hr of light left to it. how to Catch a bus Nepal In and Around Kathmandu, Nepal, SOLO TRAVEL, Yoga & Spirituality