Getting to Seoul from Daegu & Incheon International Airport 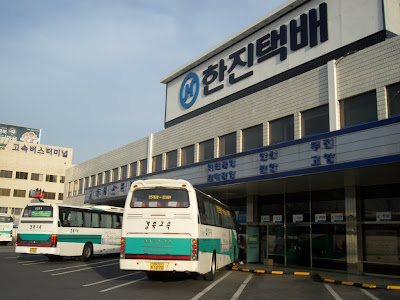 Getting from Seoul to Daegu is what every new Daegu expat (and traveler of Korea) wants to know.  Landlocked between mountains, I’ve found there’s only so many things to do in Daegu. As an EPIK English teacher living in Daegu, a mere two to four hours away,  a weekend in Seoul is a lovely Korea vacation in itself.

Table of Contents: Getting to Seoul from Daegu & Incheon International Airport

Taking the Express Bus in Korea

The Korea express bus (aka kosok/gosok boseu ) is a comfortable and cost-efficient way to travel long-distance in Korea. Express buses are reliable, cheap and fast. Korea express buses are run by private companies so some may be a little nicer than others, but in the end, it’s all still good.  Bus companies servicing Daegu will be either Kumho, Dongyang, Jungang, Choneil, or Samhwa.

There are two types of express buses in Korea

There are two types of express buses in Korea:  regular express bus and deluxe express bus. The latter is a small upgrade like cloth seats, shared satellite TV or DVD and slightly more spacious seats. The cost difference is roughly around 5,000 won (approx $4 -$5).

Remember, Gangnam Style? The inside of that bus was the inside of a deluxe express bus. Midway, it makes a rest stop at a rest station, where you can get out, stretch your legs, use the restroom and buy snacks. There are no bathrooms on the bus, so if you have a small bladder, you may want to rethink this choice.

The seating won’t be as spacious as a train, but this difference isn’t by much. But there is a next pouch in front of you for you to store things small things and sometimes, a drink holder. There is luggage storage available overhead for small items like brief case or day pack and the underneath cab of the bus is for large luggage.

Buses in Korea are punctual. They leave exactly on the minute. I appreciate this, but not when i’m running late. 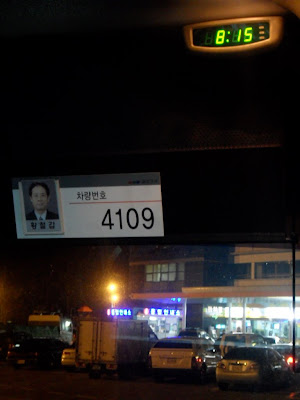 Taking the express bus in Korea: Bus drivers are punctual

Taking the Express Bus to Seoul from Daegu (the cheap option)

I  often book my bus ticket the day of travel. If the bus is full, I catch the next bus. So if I’m concerned with time or if it’s a holiday,  I try my best to buy my bus tickets in advance. If you’re traveling during a holiday, seats will be sold out early; definitely make reservations early.

There is no on-board bathroom in the bus but the bus driver will make one rest stop 1/3 way from Seoul.

This is the cheapest way to get to Seoul and equally as comfortable as the train. It also takes the same amount of time as the Mungunghwa (slow train) but not as fast as the KTX. Where is the Daegu Express Bus Terminal ?

This one took me a while to figure out – there are four major bus stations in Daegu and they all serve different regions of Korea. The south bus station serves south of Daegu, north bus services the north of Daegu and … you get the picture. For Seoul or Busan, you’ll need the  Daegu Express Bus Terminal and it is located across the street from Dongdaegu metro station (the same station for the KTX train). Do not get the bus terminal confused with the smaller bus station next door to the metro station– this is for smaller long-distance towns. How to book your express bus to Seoul

Kobus.co.kr is the main online site for making reservations online. At the time of writing, you needed a Korean credit card in order to make any online purchases from Korean companies. If you cannot book your ticket, you need to go down to Daegu Express Bus Terminal in person to buy the ticket yourself.

Korean transportation sites aren’t easy for foreigners or tourists. They’re made for Koreans and often they list stations by region. Most foreigners don’t know the Korea regions unless they have a map. So instead, the keywords are:

Dongdaegu (that is Daegu or the main terminal station)

[feature-box] Travel Essentials: Get your 4G SIM Card  for Korea  or here(KR Airport Pick Up) [/feature-box] The bus enters into (Seoul’s) Express Bus Terminal which is the larger and busier station. This terminal has its own Express Bus Terminal subway stop (Line 7, Brown Line) which is approx. a 5-8 minute walk downstairs to the subway. I enter this terminal more often and I like that it has a large underground mall. I don’t like it because it is very big and between the large underground mall and station, I’m hitting traffic and running a long way dodging traffic to make it back to my bus on time.

Dong Seoul station (East or Gangbyeon) is a smaller station located on the eastern side of Seoul and is adjacent to Gangbyeon Subway Station,  a 5 minute walk. You’ll need to ask for directions to re-orient yourself. 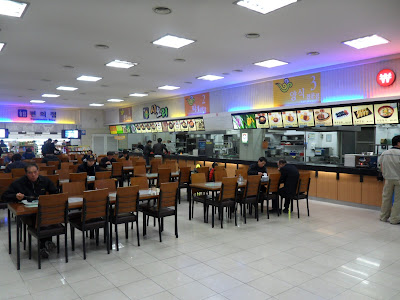 Getting from Daegu to Seoul by Train

Taking the train Mungunghwa to KTX will cost you anywhere from 20,000W to 50,000W one way.  There are two train stations in Daegu– Daegu and Dong Daegu. All trains come into Daegu and Dong Daegu Stations.

Mungunghwa train to Seoul (the cheapest and slowest train)

The cheapest train tickets cost 16,000W for standing room on the Mungunghwa train,  a four hour ride! The cheaper and slower Mungunghwa does not ensure speed over the bus. In fact, its slower and more expensive, but it has a toilet on-board.

Getting from Daegu to Seoul by KTX train will take approximately 2 hours. If you’re traveling with a group, then buy a set of four tickets and you will get a  50% discount. It is actually cheaper than buying three single tickets.  Seats are comfortable and you will depart from Dongdaegu Station to arrive directly into Seoul Station.  Korail website: http://www.korail.com/ (English site avail)

Note: Unless you have a Korea credit card, you will not be able to make reservations but must go the station in person. 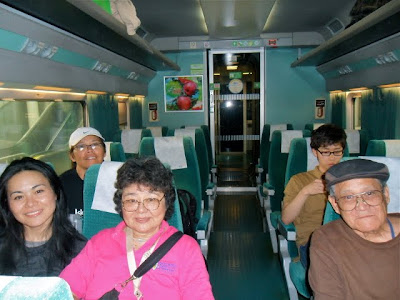 Me and my family on the train to/from Seoul.

Seoul Station is large. There are storage lockers from carry on to full luggage size. Seoul Station looks like a luxury mall and has some stores in it too (i.e. Lotte Mart, Smoothie King, etc…)

Both stations have their own subway stop and offer lockers to store luggage in, but it doesn’t always guarantee an empty locker. There are other passengers who have the same idea as you. When you arrive, look for a locker with a key hanging from it. If there are no visible keys and they are all taken, that signals that lockers are full. In Seoul, your secondary bet is to go downstairs to the subway lockers of which there are a few.  Koreans like to use the lockers, not only to store bags and luggage but to drop off things for others to pickup. 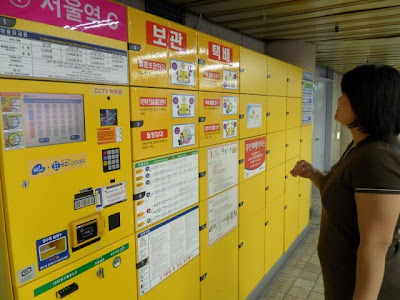 Seoul Station’s locker system is a bit tricky and confusing. The computer screen is all in
Korean and certain lockers alternate as drop-off/delivery services! 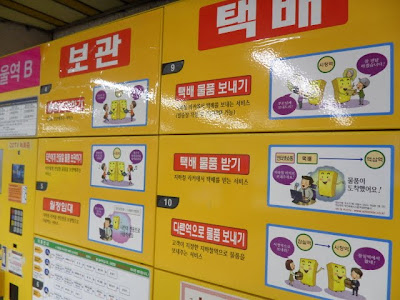 …which is good to know there’s that kind of service available in a subway station!

Getting To Incheon International Airport

Need a lift from Seoul? Buy advance tickets for the airport limousine bus for various pickups in Seoul. You can take the airport limousine bus to most cities main cities in Korea.

If you need to get to the airport, you can easily connect to the AREX airport train from Seoul Station. AREX stops at both, Gimpo Airport (domestic airport) and Incheon International Airport . AREX hours: 5:23am (first train) to 10:48pm (last train). Duration: 43 min ride . Buy your one-way AREX ticket in advance here. 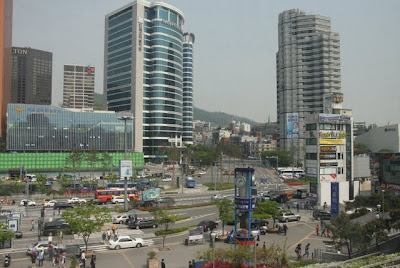 The street in front of Seoul Station- equally impressive.

Getting to Seoul from Daegu… how do you do it?

Life in Korea: getting around rural Korea by bus


Life in Korea: taking a train to all parts Korea