You might think that taking a cooking class is something at the top of every solo female traveler’s checklist of things to do. Lacking domestic skills that is something I never thought of.

But arriving at the Dalai Lama’s neighborhood of McLeod Ganj and seeing sign after sign advertising Tibetan food, it brought back vivid memories of the one dish, which had given me my first experience in tastebud-orgasms.

In short, momos are dumplings. Although they originated from China, they’re commonplace to Tibetan and Nepalese communities. They can come steamed, fried or cooked in soup, with fillings of meat, potato, vegetable or dessert.

My first memory of falling in love with momos was in the  Nepalese countryside, where every bite blossomed with succulent flavor. It was that taste which inspired me to make my own Frankenstein version in the hope of reconstructing that first bite.  Flash forward to two years later in India’s Indo-Tibetan region, where Tibetan food reigns supreme and momos are a popular dish.

Taking a cooking class in Dharamsala with Lhamo’s Kitchen

I’d seen papers plastered up on notice boards advertising Lhamo’s Kitchen. It was offering cooking classes on a variety of traditional Tibetan dishes such as soups, breads and … momos. A cooking class was something I’ve never taken abroad and my tastebuds were reminiscing. I decided I’d finally  learn how to make momos… the proper way.

Signing up for the class was easy ( at the time of attendance, it was only 200 rupees!). I followed directions to the kitchen and found a sign-up board outside the door. I penned my name and showed up at the time shown. Voila!   Instant cooking class!

When I arrived to class, I met Lhamo and some other curious foodie travelers.

Lhamo is a chef who, at the early age of 16, fled his homeland of Tibet along with many others. Without his family, he left in a group of 20 to seek freedom and safety ; now, he resides in the central part of McLeodganj and teaches traditional Tibetan cuisine. His mother was a chef in Llhasa and she is his inspiration for teaching.

He runs his classes from his one-room home, where everything is prepped for learning. A true chef, everything is clean, organized, precise. Each student receives a copy of the recipe and it’s a very hands-on learning environment, where you practice everything from mixing, kneading and rolling dough and learning how to fold and seal the dumplings.

Lhamo takes pride in his craft of teacher and chef and it shows. His English is good and he is a thorough teacher, ensure you follow his steps and truly learn what is involved in each process.

We learned three types of momo fillings: spinach, vegetable and dessert. Being a vegetarian, the non-meat agenda was perfect for me!

The hardest part of momo-making is the wrapping and sealing of a momo. There are different styles and shapes to Tibetan momos; we learned two.  Lhamo showed us how to hold the dough and to pinch it.

A pinch can seal in perfection, health, beauty and one’s pride in their craft. Who wants to eat an ugly momo, even if the taste is all the same?

Making a beautiful dumpling for me, felt like attempting a nice-looking Korean syeongpyeon (which I learned in Korea)… a bit of a challenge. It’s something which can symbolically, as many Asian traditions joke, result in ugly babies and  lesser fortunes if one doesn’t make them aesthetically pleasing!

Asian cultures sure know how to put on the pressure. 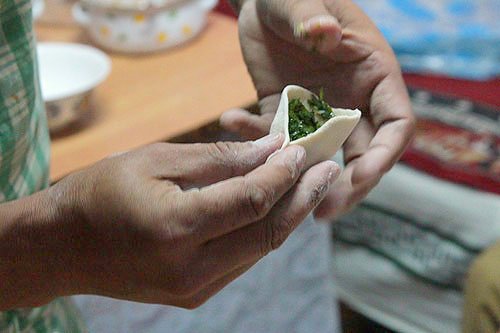 …Well, it’s a good thing I don’t have children. My momos turned out a little on the deformed-looking side!

The momos go into the steamer and after the steaming is complete, it’s the time we’re all waiting for…  But before putting fork to mouth, Lhamo teaches us one last finishing trick — to make a small side salad and dipping sauce for the momos!

Located in central McLeodganj, off of Bhagsunath Road, the classes run on a weekly basis. Each class focuses on a different dish, so it’s best to ask for the schedule. You’ll see flyers posted around town advertising Llhamo’s Kitchen as well as Mr Sangye’s Kitchen. Both are recommended by Lonely Planet. Flyers will give you instructions on how to get there. A sign-up board is outside the house. Cost is budget-economy: at the time of attendance, it was only 200 rupees.