My October kicked off with the Annual Andong Maskdance Festival and friends, Gina & Joel of A Year in Daegu.

Festivals in Korea can come in all shapes and sizes and yet, they can get into the habit of feeling eerily the same. Inflated tents sell the standard Korean culture festival foods like pajeon (my favorite- it’s a Korean flour pancake) and vendor knick-knacks in sunglasses, hardware, kitchen cutlery. Some tents sport carnival games or an arts and crafts section for kids.  This festival, being one of Korea’s better-known festivals, launched our hopes higher.

The crowd attendance was huge. Festival grounds were colored with outdoor mask sculptures, impressive, giant-sized blow-up dolls and some Korean folk war re-enactment being performed on the outdoor main stage.

But after 45 minutes of wandering around fair grounds as Gina & Joel searched for traditional Korean masks to buy as souvenirs, we grew, well… bored.  Although there were mask floats and activities,  there was only one booth selling actual masks! Where was this carnival’s star attraction in the souvenir section?

Where was the mask dancing …and where were all the booths selling traditional Korean masks? 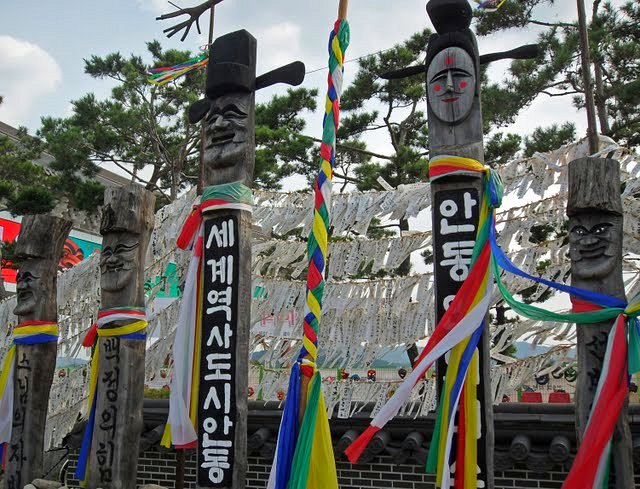 To be fair, we attended the mask festival on close to the last day. There were more mask dance programs at different parts of the city of Andong and some in more historical areas. One dance I wanted to see was a shaman dance. The festival grounds were the festival’s final culmination.

What’s behind a Mask?

Coming from a dance performance background, I was curious to see a bit of traditional Korean theater and mask fun in forms reminiscent of Commedia Dell Arte, Greek or Noh. Theater is a great signifier of a culture, often portraying traditional beliefs, values, societal status and myths of a culture.  Cool, right?

Mask performances aren’t as easy to pull off as one thinks. In mask performances, a mask can embody any archetype: deity, ghosts, gods, monks, outcasts and mortals. When wearing a mask, character expressions can feel harder to convey as a mask’s expression is static. A performer therefore, must rely on their body animation, gestures and vocal pitch to communicate their archetype’s ever-changing emotions and thoughts. An eclectic and modern fusion, touching on the idea of masks… sorta.

But under the main performance tent, the schedule of shows felt random at best. The thematic thread wasn’t clear.

A  long Thai martial arts show and an equally long Ajosshi ballet performance, choreographed to a French jazz/ballet theme. ..This latter show was a bit strange for the venue; but as it was produced by a Korean-based dance troupe, the cross-cultural hybrid produced a bizarre perspective I appreciated. Finally, the golden moment I had been waiting for…

A shade more simple and folksy but absolutely reflective of mask traditions, the next act was a story about a girl, her mother and a cow. The performers executed a wide range emotions and expressions for their characters flawlessly and it produced a delightful look into Korean folklore. This was the last day of the 10-day Andong Maskdance Festival and I had seen only a small sample of what it offered. Perhaps I’d missed the actual brochure highlights of the festival. I’ll never know. As a tourist or traveler, sometimes an event only has one shot to make an impression.

I think A Year In Daegu’s review sums up my feelings best when she says:

“In the end, I’m sure any country would have it’s hits and misses with cultural performances and festivals, but you gotta give it to Korea, they really do try.”

Take the Dongdaegu express bus terminal (* Note: this is not the main express bus terminal which exists directly outside and across Dongdaegu subway station. This is a smaller station around the far right-hand (if you’ve just exited the subway and are facing the bus terminal) corner of the main terminal. This terminal goes to smaller cities and towns. Check the Kobus website for schedule . Duration: 1hr 40min  Bus hours: 6:40A-8:50P; every 20-40 min
Cost: 7700 W