A Guide to Hot Air Ballooning in Cappadocia Due to Cappadocia’s alien landscape being a joint creation between man and nature, there’s a lot of unique attributes to it that you just will not find anywhere else. 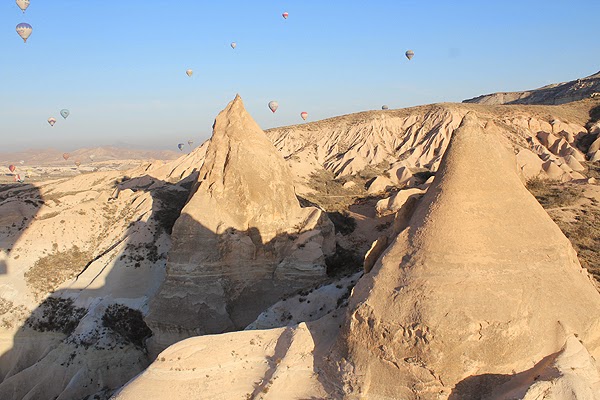 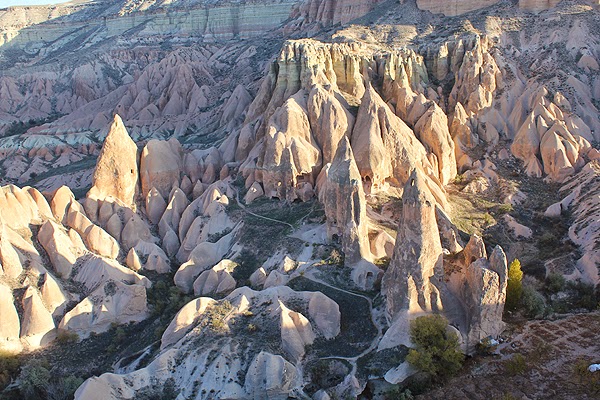 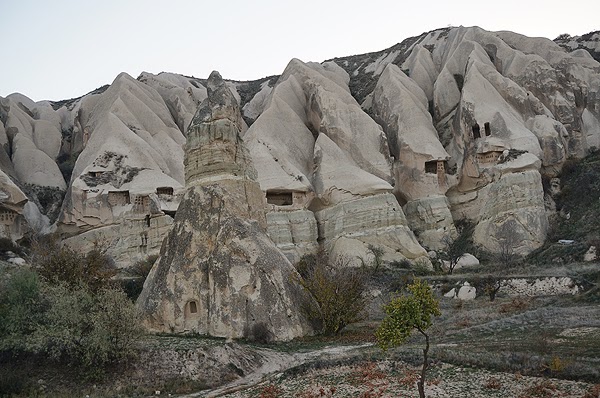 Table of Contents: A Guide to Hot Air Ballooning in Cappadocia

How much does hot air ballooning cost in Cappadocia?

Hot air ballooning costs in Cappadocia range from $100-$300 per flight, sometimes even more if the operator is merging it with a day tour.  The ride can last anywhere up to 1.5 hours.

How to find the best Hot Air Balloon Tour in Cappadocia?

But Cappadocia has at least 25 balloon operators (Check out Cappadocia balloon tours here ). How do you choose?

Read: Things you need to know about traveling Cappadocia 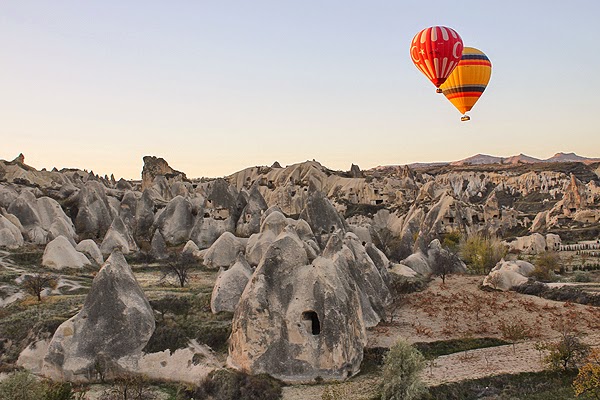 When shopping for a good tour, I trudge through a wealth of resources~ travel bloggers’ recommendations, my Cappadocia travel guidebook, TripAdvisor reviews,... When I finally find an operator that seems good,  I check their website, and yes, even their social media accounts. I’m a tour stalker.

Cappadocia Voyager Balloons has a lot of favorable online reviews and they even have YouTube videos. The owner, M.Halis Aydogen Instagrams his flights regularly and has a larger following than me (ouch)!

My decision was obvious.

Why not? Experience a two day Cappadocia tour with a hot air balloon from Istanbul 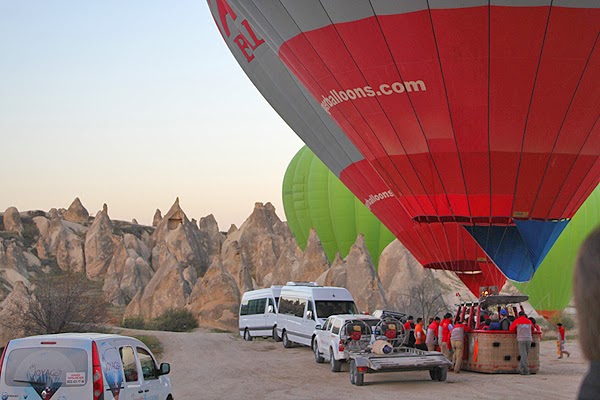 From start to finish, Cappadocia Voyager Balloons was a very professional, respectable and personable tour outfit, gearing to put the customer’s experience and above all… safety, first.

If a  photograph speaks a thousand words, then a video speaks a novel. For insight about what to expect of a hot air balloon ride, see the Cappadocian terrain from different angles and get more tips on how to find the right hot air balloon pilot operator, watch the video!

In addition to the video, here are other ideas that you might find interesting…

If I had only had one balloon ride to take in this lifetime and I valued my life, hot air ballooning in Turkey would be it. Surprised, was my reaction to the discover that U.S. requirements to becoming a certified balloon pilot were skeletal next to a Turkish pilot!

Turkish Civil Aviation requires Turkish balloon pilots have to go through a series of training curriculum and accumulate flight hours. If that pilot wanted to be certified to fly over 425 feet, they’d have to accumulate 200 hours of flight time, compared to the U.S.’  25 flight hours or something crazy low like that.  Whuh-huuuh??? 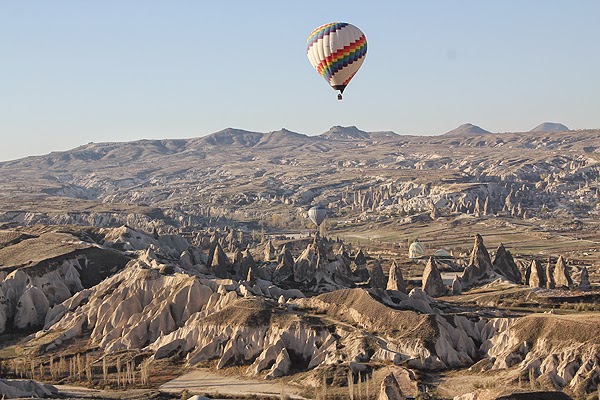 How high do hot air balloons go in Cappadocia? Everything is regulated by Turkish Civil Aviation

Are the hot air balloon tours in English?

With Voyager Balloons there was English. Communication is key for this ride.  Cappadocia has a fascinating history of cave dweller, underground caves,  Christian persecution, pigeon farming, and “hand-carved” rock landscapes, etc…   Learning about this undoubtedly make you see Cappadocia in a more awesome light.  M.Halis was my pilot and as you’ll see in the video, his English is perfect. 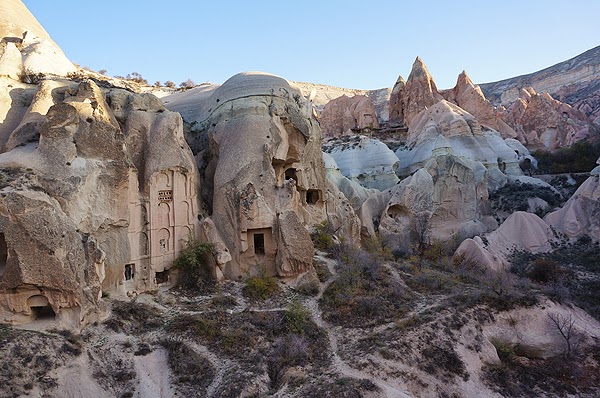 How many hot air balloons are in the air in Cappadocia?

A hundred balloons can be in the air in Cappadocia and 45 minutes later another fifty can be launched.  That’s a lot of balloons! It’s also part of what makes flying in Cappadocia additionally special, over other places . 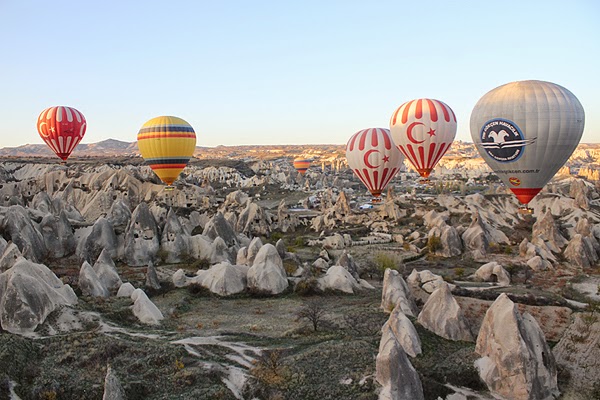 How high do hot air balloons go in Cappadocia?

Every flight is difference and it changes with the weather conditions.

Take off and landing are not in the same spot and the location of the launch can change daily, depending upon weather, wind speed and direction. For that reason, your pilot will always be in touch with his ground team to let them know where he is and where he’ll be landing.

How much your balloon moves horizontally is based on the wind direction and force . Sometimes, you can move miles; other times, you might move just a few.

The day I went, it wasn’t very breezy, so there was one point where my balloon could only move vertically, while waiting for a breeze to catch. Luckily, we were in a gorgeous spot.   There were times we got so close to a peak you felt like you could reach out and touch the rocks.  I was timid and didn’t want to shake the basket, so I didn’t try it.  …But I was tempted.

And then… our balloon went high!  Like “Oh my God,” skydiving high, where the air felt thinner and any sharp movement shook the basket. Still, I felt safe. How high do hot air balloons go in Cappadocia? Height is capped at 6,000feet by Turkish Civil Aviation How long is hot air balloon ride in Cappadocia?

Cappadocia Voyager Balloons  picked me up at my Goreme hotel at 5am, took me to their Goreme office to enjoy a light Turkish breakfast and then we were taken to the launch point. The ride takes around 1.5 hours

Seeing as I was filming, my concern was whether my basket would be too crowded. There were only three people in my basket and the basket was spacious enough to comfortably move. In fact, the travelers I shared it with were super thoughtful. If they thought they were getting a great view all to themselves, they offered to switch. But fortunately, our balloon did some twirls, while going up and down, so we were all able to photograph the scenery.

The landing was smooth.  Although M.Halis showed us the landing position, he actually brought the balloon down … on the transportation truck!  How’s that for a perfect landing?

At the end of our flight, they set up a table with celebratory champagne and gave us flight diplomas like graduation!  It was a great way to end a once-in-a-lifetime experience!

Balloons operate year round but October to March many cancellations are prone to occur due to the weather.  Rain, snow, storms or rough winds can all cause flight cancellations.  To be safe, I booked my flight immediately after arrival in the case of bad weather and cancellation.  If the operator cancels, they will either refund you or let you fly the next day. Have you ever taken a hot air balloon ride in Cappadocia?

Note:  This post contains affiliate links at no extra cost to you but helps me maintain this site. The flight was complimentary of Cappadocia Voyager Balloons, but all opinions are definitely my own.