Arriving in Ho Chi Minh : Lessons I learned about Vietnam on my first night “Do you know that Vietnam is a Communist country?” my mom added before parting on Skype.

Timing. Mom’s are like that. This was my third big solo trip to a developing country and she’s concerned for my safety. Her method of care is to instill warning, rather than courage… at the last minute. However, I’ve heard Vietnam is reasonably safe for female solo travelers so I’m not too worried.

My morning call was early.  I was running late and it was the first time there were no taxis in sight! Korean taxis are usually everywhere.  Was this a sign? A traveler’s omen?

Like a boxer in training, I jogged with my backpack through Daegu’s humidity straight to the metro. Drenched in sweat, I arrived at the express long distance bus terminal (across from Daegu train station) with two minutes to spare!  Close call.  Korean buses are punctual. I hopped aboard the Daegu bus to Incheon Airport and buckled down for a five hour ride.

At the airport, I exchanged my Korean won for starter Vietnamese cash. In Korea, I think in USD conversion rates when I buy things. Now the conversion between KRW-VDN-USD (or Korean Won to Vietnamese Dong to U.S. Dollar) was throwing me off.

I counted my money at least seven times, only to not understand why I felt I was continually coming up short. All the zeroes in Korean won can feel confusing, but the Vietnamese dong is much trickier. You have more zeroes, but even less worth! After wasting a day in transit, I touched down in Ho Chi Minh at midnight. It was two and a half hours later than I told my hostel.  I didn’t have a good feeling.

After buying a SIM card for my mobile phone and quickly purchased a pre-paid ride into town with Sasco taxi ( 100,000 VDN). My taxi raced through the exhilaration of a warm Saigon night, funky neon city lights, deserted streets and occasional darting motorbikes. On the radio, a Vietnamese chanteuse sang a tune that was deep, haunting, lounge… cool Vietnamese pop. My taxi dropped me in Ho Chi Minh’s Old Quarter, the backpacker’s district. Exhilaration in one hand, fatigue in the other,  I arrived to the My My Arthouse hostel’s gates. Locked. Lights off… closed.   I rang the buzzer.  Vietnamese dealings are unpredictable and spotty, I’d heard. It would prove itself true.

Hanh, a sprite-like Vietnamese hostel manager in her late 20’s opened the warehouse-like gate and explained that when I didn’t show up at the time I confirmed, she gave my bed away.

Never mind, that I had a reservation or that I gave my flight information (which she could easily call) or that I wrote her that I was a female traveling alone… I didn’t arrive when I said, so my room went to the next in line.  Nothing personal, just business… and in Vietnamese business, nothing is set in stone until they’ve got your passport as a security deposit for your room!

3. Hotels sometimes ask to hold your passport until checkout or payment.

Yes, passports are sometimes, left with the hotel until checkout or payment –a rule in Vietnam!  I’ve never given my passport over, but obeying was the only way I could think of booking a room.

Spotty was the general impression I had of Vietnam before I arrived.

4. In Vietnam, transactions and bookings are best done in person

When I researched hotels to book in Ho Chi Minh, many Vietnamese hotels and tour agents never responded to my email queries. It made me realize transactions are probably best carried out in person, so business owners can see your money and know you are a sold customer. Note: Later I found there is much business counterfeiting in Vietnam. 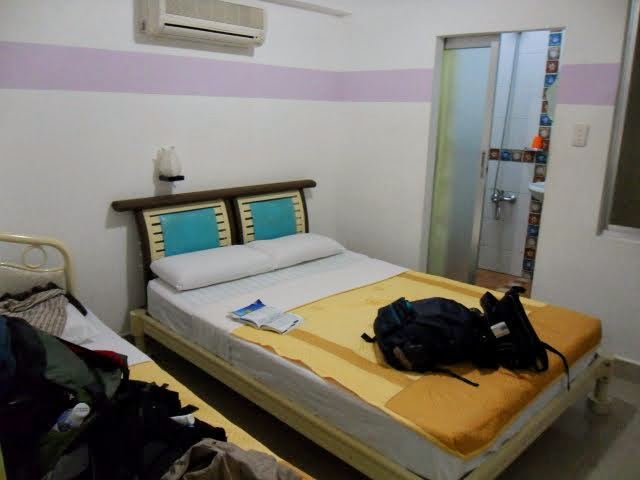 All was  dark. Hanh was apologetic and offered to help me find another hotel. I whipped out my Lonely Planet Vietnam

guidebook and we picked the next in line.

Kim’s Hotel… walking distance. Booked full.  Hahn explained that most hotels at this hour,  would follow this pattern. Well, shit on a schizzel… Drunken party laughter of boisterous tourists mixed with the sputtering of passing motorbikes. I was alone; and yet the street noise was weird solace. Worst case scenario, I’d pull a damsel-in-distress and vie for the help of fellow travelers. Faced with survival, all my Asian inhibitions escape me. But then Hanh found a hotel that was open 24 hours.  … At $20/night, there was a commission markup on my distress. But at least I had a room!  Hahn seemed genuinely nice to have walked me around to help me find a place. A young Vietnamese man rose from his sleeping cot and TV located in the middle of the hotel lobby and checked me in.

I left my passport with the front desk.

I got a spacious double bedroom, with a balcony view overlooking the street life of D Bui Vien Road. But…the Minh Chau Hotel was a cross between a crusty relic and a dive. Off-white sheets, water-stained ceiling with occasional mildew stains in the room and bathroom.  I knew I could get better for less money,… but at 1 AM, you think I’m gonna try?

For that night, this was home; and on the bright side, I had a silk liner and my home had…uh, “character”.

Walking around the Old Quarter at night, a sweet incense perfumed the air. Bars were open, motorbikes zipped by and strange men on bicycles made weird sounds of snapping forks or charcoal lighters as they pass. They offer a service; I don’t know what it is… Tourists roam the streets like moving glow-in-the-dark targets and I can’t tell if the girls at the cafes, restaurant and bars are average Vietnamese loungers or (sorry)… prostitutes. At the end of my street stood an amusing eye-sore of a landmark–  a giant face of an angry red bull– The Crazy Bull, a bar for foreign travelers and expats.

At the internet cafe near my hotel, the connection speed was blood-letting. My fingers wrestled with the computer keyboards. It was…  “rffsesng towrkforme“.

Then I realized that Facebook is blocked in Vietnam, even though the few Vietnamese around me were happily checking Facebook status updates.

I heard the faint sound of my mother’s voice: “Did you know Vietnam is a Communist country?…”

• Open Google search engine
• Type in Facebook.com for search
• Click on the link which in English is normally your Cached option.

They say there’s a high amount of theft in Ho Chi Minh City. Just as I was about to leave the internet cafe, a shriek came from across the street. A young Canadian backpacker, watching the street life outside jumped up to excitedly relay the news:

“You would not believe what just happened! Some guy jumped out of an alley, snatched the bags of these two girls and took off like lightning. Should’ve seen him run! I’ve never seen anyone run so fast!“

This was my first crossing with theft in Vietnam. It would not be my last.

My first four hours in Ho Chi Minh was both, alluring, interesting, sketchy and unpredictable.

All I could think at the moment- 22 Things to know before you go to Vietnam